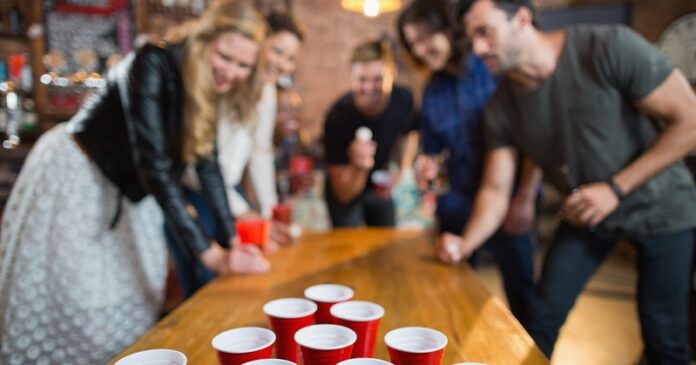 House parties have become more common in our day-to-day life. It releases our stress and at the same time, we get to spend some quality time with our loved ones. We add dance, music, and different types of fun games to make the house party more interesting and exciting. But, you know what you can do to make it even more fun? It’s drinking games. Yes, it will make your house party cooler and memorable.

So, we have gathered some of the best drinking games for your next house party. Just grab your friends, pull out one of these amazing drinking games, and let the fun started. Check out the list below:

This game is best enjoyed when there is a large number of people to play. Everybody sits down in a circle. The person sitting beside you will whisper a question to you and the answer to the question has to be somebody who is playing the game. For example: “Who is the brilliant one in the group?” Then, you need to point to the person who is the answer to the question. If the pointed person wants to know the question, they have to finish their drink.

The easiest way to play “Categories” is to form a circle, but you can also be sitting in a line, or just remember who you’re after. One person will name a category and the next person will begin by naming one part of the category. Then the next person will go and it will continue until a person can’t think of anything. And whoever gets stuck, drink! Then the game starts again with another person naming the category. This should be a fast-paced game and the category should have some difficulty. For example: Specific actor movies, Beer brands, TV shows about coworkers, Disney movies, etc.

There are a lot of variations on this one and works well with a larger group. However, everyone will surely need a deck of cards, one cup, and a drink. To set up the game, place the empty cup in the middle. Around the empty cup, evenly spread the deck of cards face down. Each card must touch the cards on either side, creating a chain of cards. After that, whoever wants to play can gather around the cup. Going around the clockwise, players must take turns picking cards. Each card in the deck is entitled to a specific action. You must chug whatever drink is in the king’s cup in the center if you break the chain of cards.

You can follow a setlist for what each card means. For example: Ace- Everyone drinks, starting with you, Two- Pick someone to take two drinks, etc. To make it more clear, you can write them down so everyone knows the rules. Just do not break the chain. However, the game only finishes when all cards are used up. Additionally, there is one card that cannot be changed, that is, King. The player must empty their drink into the middle cup if they pick up a King.

5. Never Have I Ever

This is the perfect game to know more about your friends and their hidden secrets. It will inevitably descend into confessions that should not see the light of day. Everybody sits down and has a glass of drink in their hands. Any person can start this by saying ‘Never have I ever… (insert situation here). Now, all of them who have done that activity have to take a swig. The more person you have to play, the more entertaining it is.

This is such a fun game and can be played with any number of people. Among players, one person asks a ‘most likely’ question. Then everyone points to who they think is most likely after the count of three. That person has to finish their drink who has the most people pointing at them. It is a fun game where you can get drunk and also get to know that what everybody thinks about you.

This is a super simple game and has the same structure as Kings Cup. You will need a center cup, drinks, and a coin. Pour some drink into the cup and the quantity depends on how much confident you are feeling. Then, flip the coin and call it when it is in the air. It’s the next person’s turn if you are right. However, you’ve had to drink whatever is in the cup if you are wrong.

Flip Cup might be the best drinking game to start the house party. This game is played against two teams competing against each other. Both the teams will keep their cups with drinks at the edge of the table and will stand on the opposite sides. Everyone must finish their drink before the next member begins and flip the cup to the upside-down position with their fingers. And the first team to complete the drinking and flipping cups upside-down wins.

If you are good at keeping straight face, then this game is for you. All players will have to write sentences on small pieces of paper. The sentences that are ridiculous or inappropriate and anyone would struggle to read while keeping a straight face. Each player will choose a slip of paper (one at a time) and attempt to read whatever is written without smiling, giggling, or laughing. They will have to drink if they fail. You will see some of the amazing facial expressions in this game.

Well, try any of these games at your next house party and people will go crazy about your parties. And, if you also know some of the best drinking games, then let us know in the comment section below.