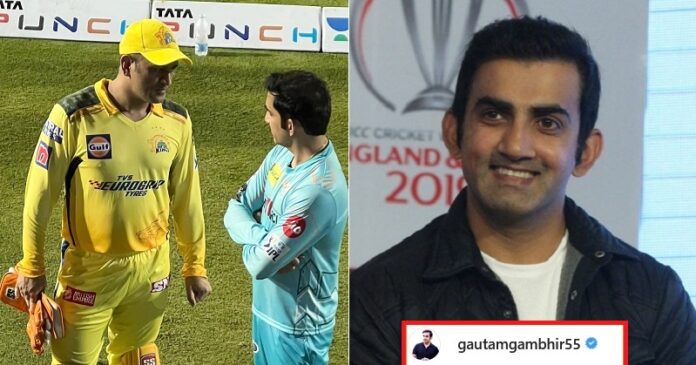 After the match played at Brabourne stadium in Mumbai where the Lucknow Super Giants defeated the defending champions Chennai Super Kings in the high-scoring match of the Indian Premier League (IPL), 2022, former CSK captain MS Dhoni, and LSG mentor Gautam Gambhir were spotted sharing a conversation with each other, the video of the same went viral on social media.

MS Dhoni and Gautam Gambhir are two of the biggest cricketing sensations of the Indian cricket team. They have numerous match-winning performances under their wings for team India, which includes their iconic T20 World Cup 2011 partnership.

Gautam Gambhir was often found openly criticizing MS Dhoni regarding several issues in the past, this led to rumors regarding a rift between the two players, however, moments like these prove that the rumors are all rubbish.

After game number 7 of IPL 2022, (CSK vs LSG), a viral video surfaced, where LSG mentor Gautam Gambhir can be seen going to Dhoni, standing with Avesh Khan. Both the players were witnessed having a long conversation after the match.

Meanwhile, Gautam Gambhir took to his social media and shared a heartfelt post after the match that shattered the internet. In his Instagram post, Gambhir shared a picture of himself and Dhoni whom he mentioned as ‘skipper’. He wrote: “It was nice catching up skipper”.

As soon as the videos and images of Gambhir and Dhoni’s meet-up spread on the internet, social media was flooded in no time with amazing reactions from the fans. Fans just can’t appreciate enough the camaraderie between the former Indian players.

Check out some of the reactions of fans on Twitter:

Breaking the internet since eternity….. pic.twitter.com/tIkdFYMMNZ

Picture with full of emotions and respect ❤️
Nice to see Ms dhoni and Gautam Gambhir together ❤️#CSKvLSG #IPL2022 pic.twitter.com/PulELKlutI

This is for those who said Gautam Gambhir and Ms dhoni don’t have good relationship.
🖕🖕🖕#CSK #CSKvsLSG #jadeja #ChennaiSuperKings pic.twitter.com/VylIA9Kd2O

MS Dhoni and Gautam Gambhir after the match – Two one of the best IPL Captains and players. pic.twitter.com/q6GiJ9XkSf

While Gambhir retired in 2018, Dhoni retired from his international career in 2020 and stepped down as the captain of CSK two days before the start of IPL 2022.