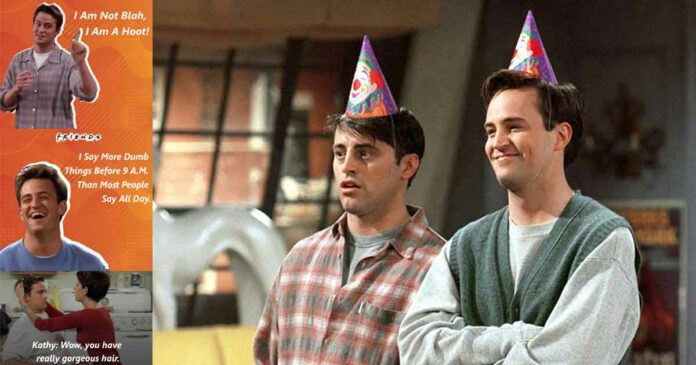 Hi Chandler… it’s the year 2020 and we hope you are not busy taking your nap on your birthday! Finally, the day has come and we are excited to know how you would celebrate it this year. But we have started celebrations already. For us as fans, what can be better than to talk about you and share your one-liners! So here we begin the celebration!

We have a lot many things to celebrate and we don’t want you to miss out on anything. So here’s a small chart to list and locate the contents of this article:

So let’s celebrate Chandler’s Birthday Now! Happy Birthday Matthew Perry! May you have a wonderful life ahead!

Matthew Perry is now 51 years old and still hasn’t lost his sarcasm and humour. Did you notice him in any of his recent videos? He can’t stop being Chandler all the time. Actually, he is Chandler by nature. It seems like, he never had to act in Friends rather he was just being him always. We can never imagine Friends to be a hit if there was no Chandler in it. He is like the salt to meat, if you know what it means you know how important it is.

Most of the Friends Fans love Chandler and there are numerous reasons to love him. Let’s discuss some points that make him the most loved character in Friends.

Why We Love Chandler Bing?

Well, the simplest answer to the question would be, we love Chandler because we are so obsessed with his sarcasm and comedy. We can’t get over his jokes and the way he cracked them. But that’s not all, there are things that make him the best and the most lovable.

Chandler is the guy you can turn to when you want some help and he will be there for you. He has always been so supportive to Joey and without asking for anything in return. He is good to everyone and never has any hard feelings for anyone except for Richard though. It’s tough to find a cute guy who can be so kind and friendly. Sometimes, he may be awkward while meeting someone new but once he gets along with them he can be the best guy to hang out with. So a friendly and helpful nature is always to enough to love someone, isn’t it?

He kept on reminding himself that he is afraid of commitment but in reality, he is made for relations and commitment. He can never be ok with flings in relations, rather he looks for something more permanent and lasting. Remember the time when he found a really hot girl who had a husband and maybe two boyfriends apart from Chandler? He could have been with her for a few more days or months but his conscience didn’t allow him to do that. Why? Because he is not meant for that kind of relationships, rather he urged for something that he has with Monica. So finally when he got it, he stuck to it forever! And such a guy who respects relations is always lovable.

Chandler is a true friend.

Chandler is a guy whom everyone would want to make their ’Best Bud’. He cares for his friends a lot. Taking the example of Joey we know that he was like an elder brother to him. He took care of many of his expenses and helped him morally whenever needed.

There can’t be anyone like him when it comes to friendship. He even planned for a Joey Room in his new house. Who would do it for their friend? No one can ever match him in his commitment to friendship. Also, he helped others whenever needed.

His Sarcasm and Quick Wit is something no one can ever beat! He is the best in what he does and raised his level so high that no one can match it ever again. Every line he says is humorous. We are so addicted to him that even simple and genuine lines by him might seem a comic element at times.

He has a third nipple.

We don’t love him for the third nipple really, but it makes him unique from all the other friends in the show. Atleast we will have a third nipple to comment on him always! After all, friends aren’t useful enough if you can’t make fun of them. Also his mom his hot, man! For some, this might be a great reason to love Chandler actually! 😜

Was Chandler The Perfect Husband?

We have listed a few points to answer this question and if you don’t agree to these points then don’t forget to share your views in comments. Well, he almost left Monica at the altar and proved to be an unreliable guy so it becomes hard to answer this question. So let’s discuss if Chandler was ever the perfect husband ever.

While Chandler was in Tulsa he had an opportunity to do spicy things with his secretary but he didn’t slip even for a second. He was determined that he loved Monica and won’t do anything that could make things go wrong with her. He loved Monica a lot!

Chandler was supportive and understanding.

While going to Tulsa Monica didn’t move with her but Chandler was still ok with it, he knew that the job was important for Monica as well and it was like a dream for her. So he supported her and let her stay back to take the job.

Chandler accepted Monica with all her flaws.

We all know how tough it is to have a girl like Monica in life. She can be a freak at times and have crazy obsessions. But Chandler never had a problem with it, even if he did he managed to let it go than to make it an issue between them. What else do you need in your partner if he knows everything about you but still loves you a lot?

Chandler puts Monica above her.

Monica was dominating but Chandler let her take charge in most cases. He did not have much problem in letting Monica take lead because he knew it makes her happy and satisfied. He let her rule for her happiness. He even thought about Monica more than herself. So why won’t he be a perfect partner or husband in this case?

How Chandler Would Be As A Father?

After Chandler and Monica got their twin kids the show ended and we didn’t get to see the parenthood scenes of the couple. We can just guess how it would be and what they would do with kids in their lives. Given the fact, that Chandler had a lousy character who didn’t have much father like qualities and rather was a kid himself. So do you think he would be a good father? Let’s discuss.

Chandler would be a friend.

He may not be stern and grumpy like a father is generally expected to be he won’t be a bad father. We assume he would have a very friendly and jolly relationship with his kids. The children would approach him ease be it any matter because he would be like a father to them.

Chandler would play with the kids and tell them jokes and they would have a great time together. So Chandler would not be a father but ould be a great friend to his child. And believe me, kids need it at many stages of their life.

Chandler can be stern as well.

While Rachel, Ross and Amy were fighting to know who might get Emma after Ross and Rachel it was Chandler who took a stand and showed us that he can be a strong father figure as well. So he is a perfect father in every scenario. But we are not much of a fan of his grumpy side though. We are sure Chandler would have his own ways of getting his things done. He would surely use his quick wit and amusing mind to control his kids.

Chandler’s sarcasm is unimaginable and we can’t stop imagining how well the kids would grasp the same qualities from Chandler. The kids would be the funniest in their schools and will always crack jokes to make everyone laugh. On the other hand, Monica would be really frustrated but happy with three kids (including Chandler) in the house. And it’s quite possible that the kids would be more close to Chandler than they would be to Monica.

Well, we have discussed much of Chandler’s sarcasm and wit, but life his BIrthday would be incomplete if we don’t make you laugh with some of his best lines from the show! So here they come, feel free to share them with all Friends Fans.

Some Special Sarcastic Replies By Chandler!

Chandler was not only good with his one-liners. but his replies were super awesome always! He can make you laugh hard with his replies which he can’t stop. Sometimes, it might seem like he has a problem or a disease to crack jokes on almost everything. But, who cares until it’s hilarious. So get ready to read some of the best replies by Chandler Bing in Friends Series. See if you can remember all the scenes!

We thank Chandler Bing or Matthew Perry for giving us some wonderful times. True Friends Fans can never imagine how their life would have been without this wonderful show. Many youths have learned about true sarcasm from the king itself. So thanks for all your jokes mate. May you have a great BIrthday and you live long to bring us more fun stuff. And don’t forget the Friends Reunion, we are eagerly waiting to see you in it.