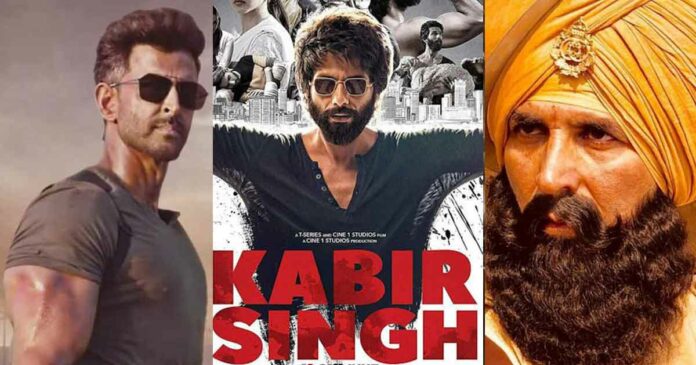 Again, there were remarkable movies like Super 30 to Dreamgirl; it was like a complete year anyone could wish for. Everyone got something because almost all genres saw new releases. And, as we know, with a Great Movie comes Great Money! So we tracked down the top 15 movies in terms of their earnings.

Note: The Earnings include the total of Domestic and International earnings. And the list stands good until any new blockbuster movie comes up after the Lockdown in India.

A blockbuster filled with action and excitement! Interestingly, the movie was simultaneously filmed in Hindi, Tamil, and Telugu, making it the debut for Prabhas in Bollywood. And, making it the first appearance of Shraddha Kapoor in South Indian Cinema. The plot is exciting, and the scenes are even more appealing.

A movie inspired by the real-life event of the Indian Army’s surgical strike at the Line of Control in Pakistani-administered Kashmir. The film impressed the audience, and the box office numbers proved it. The famous statement ‘How’s the Josh’ has managed to take the internet by storm. The movie rushed our adrenaline and shooted patriotism to achieve the level of success it possessed.

The movie became the biggest opener of 2019 and faced competition from the film, Kabir Singh. The audience enjoyed it, especially fans of Sallu Bhai. But only a few people know that the movie is a remake of the Korean Drama ‘An ode to My father’.

The movie talks about IVF, a fertilization process. However, the audience took it well because it was fun. They added humor when they created mayhem during the IVF process. Because of a similar surname, two families’ sperms for fertilization got exchanged, and now you can imagine the chaos the movie contains.

The movie is inspired by the life of rappers, Naezy and Divine. It was well-received in the metropolitan cities. Gully Boy narrates how parents of these rappers worked hard for their education but Murad, Ranvir Singh realizes his love for Rap and focuses on it instead. He voices out his views on social issues and life in Dharavi using his rap and things change for him soon.

It is a revenge family drama, mostly witnessed in the early ’80s or ’90s. It is an exciting story that connects the audience to the previous stories. An entertaining and refreshing movie you must watch. Besides that, this movie features everybody’s favorite, Salman Khan.

Ironic to the message of the movie, a character from the movie, Sushant Singh Rajput, committed suicide recently. The whole nation was shocked by the news. We too express our condolences. As a tribute, we collected some memories from his movies in the article below.

Anand Kumar was an award-winning academician who left his high-paying job to teach talented students from underprivileged families. He made them capable of IIT-JEE entrance exams, but the path wasn’t easy. The movie captures the hardships and beautifully shows his story. The name of the movie comes from the fact that he took in only 30 students in his class, and every one of them cleared the exams.

The movie portrayed ‘human loneliness’ in a very creative and entertaining manner. Ayushmann Khurrana as Pooja, a female character who lives on Calls brings in unmatchable humor. It’s funny and gives out an important message by the end. Simply a Must watch!

Bala keeps you glued to the screen owing to its excellent storyline. The topic is relatable in today’s world. The film talks about insecurities that we carry in our minds and how we allow them to take control of our life. The portrayal of the topic was bold and effective, and the audience loved it.