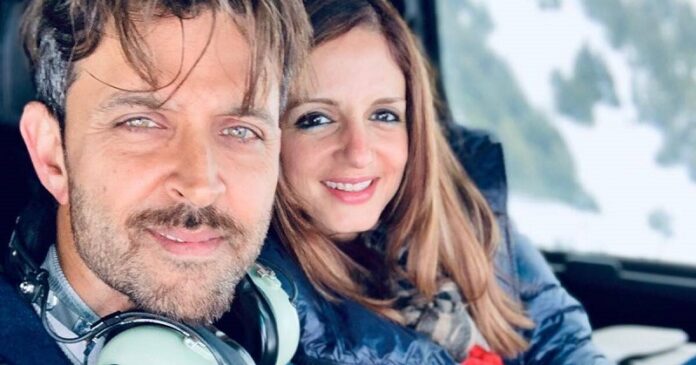 After the divorce, superstar Hrithik Roshan and his ex-wife Sussanne Khan have moved on in their personal lives, though they are often seen together spending time with family for the purpose of co-parenting their children. Recently, a video of Sussanne Khan surfaced on social media, which came as a shock for most people. The video of Sussanne was taken by the paparazzi while they spotted her.

What’s in the after-party video?

Sussanne was spotted with her friends in the after-party video that surfaced on the internet. She was spotted bidding goodbye to everyone at the dinner party while going toward her car. But the way Sussanne and her rumored boyfriend Arslan bid goodbye to each other is enough to prove that the two are very close and share a special bond.

The duo, Sussanne, and Arslan were caught on the camera showering PDA and hugging each other regardless of the cameras. Even when Arslan made Sussanne sit in the car she did not stop showering love on him even after the car started moving.

The video has been shared by Viral Bhayani, which went viral really fast on social media and was flooded with comments from shocked netizens. The dating rumors of Suzanne and Arslan have been in the news for quite some time.

Are they officially a couple?

They have not issued any statement indicating the status of their relationship yet, but have been spotted on social media several times being affectionate towards each other.

Check out the viral video by Viral Bhayani:

Who is Arslan Goni?

Arslan Goni is an actor and the brother of Ali Goni, who was a contestant in ‘Bigg Boss 14’. Recently Arslan has signed a web series ‘Main Hero Bol Raha Hoon’ with Ait Balaji. Reportedly Sussanne met him through a common friend from the TV industry and the two became very close and have known each other for a year.

Who is Hrithik’s girlfriend?

Hrithik Roshan is in a relationship with Saba Azad, and the two have been making headlines with their adorable pictures together. Saba Azad is a musician, and actress who made her Bollywood debut with the movie Dil Kabaddi. She also endorsed a lot of brands like Pond’s, Cadbury, Tata Sky, Maggi, Google, Clean & Clear, and many more.