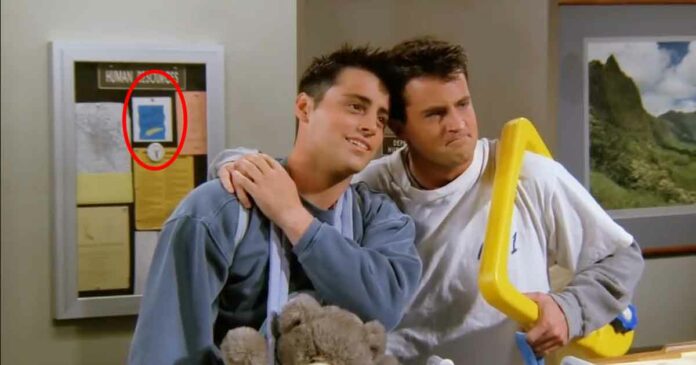 FRIENDS is one of the most famous shows of all time but it is not untouched by flaws. Even with the re-runs running on many channels every day, fans can’t seem to catch the plenty of continuity errors that have in the show.

While making the show, they do multiple takes of the scenes. In editing, they take two different takes and make the final product. And, it results in continuity errors with characters, background, props, and much more little stuff. While those mistakes are rarely enough to change the story of one’s suspension of disbelief but it’s perhaps comforting to know that even big shows like FRIENDS also mess up sometimes.

However, fans don’t always recognize mistakes like this because they’re engrossed in the plot. FRIENDS benefited from this because it featured 10 seasons and 236 episodes of entertaining and hilarious episodes. Some of these mistakes are easy to catch up on when you see them for the second or third time.

We’ve rounded up a few such mistakes that might escape your vision on a first watch or subsequent watches, for that matter. Read on and you will able to ignore them again.

Take a look at the last episode when Phoebe and Ross rush to the airport to stop Rachel from going to Paris. Some extras were standing behind them who also appeared behind Rachel in another airport (note the headscarf).

“The One With All The Wedding Dresses” – Season 4, Episode 20

The writing on Magna doodle at Chandler and Joey’s apartment kept changing across the cuts. At first, when Joey was complaining about staying up all night before a sleep clinic, “Get Out” was written on it. However, it changed to “Poop” when Chandler talked about how he cannot dance at weddings and Ross walked in while Chandler was showing Rachel and Joey how he danced. Perhaps it changed to reflect what politeness forbids them telling Ross.

In this episode, Joey tells about his “Hand Twin” to the Chandler. While telling him, he points at Chandler with his left hand, which changes to his right hand in the next shot. Perhaps this episode’s editor had a keen sense of irony.

“The One With George Stephanopoulos” – Season 1, Episode 4

In this scene, Ross, Chandler, and Joey went to attend a Hockey match, where Ross wears a foam finger which later disappears magically. However, that is unfortunate for Ross because foam finger could have cushioned the blow of the puck which hit him later.

In this scene, Joey was raiding Monica and Chandler’s apartment to get something to drink for an audition. However, there was a glimpse of a stand-in along with bottles changing to cans in Joey’s hands. Perhaps Joey had a talent of a magician which he never discovered.

“The One With Rachel’s Inadvertent Kiss” – Season 5, Episode 17

In this episode, Phoebe dates Monica’s sous-chef Tim and Monica doesn’t fire him for Phoebe’s sake. When Phoebe decides to dump Tim, Monica can finally fire him. However, the edges of the frame were cropped out when FREINDS originally aired while they both were talking about it which revealed that Monica’s stand-in took her place in the scene.

Even if the FRIENDS have many minor mistakes, we still love watching the show, and will always be one of the favorite shows. However, if we miss mentioning any mistake, let us know in the comment section.