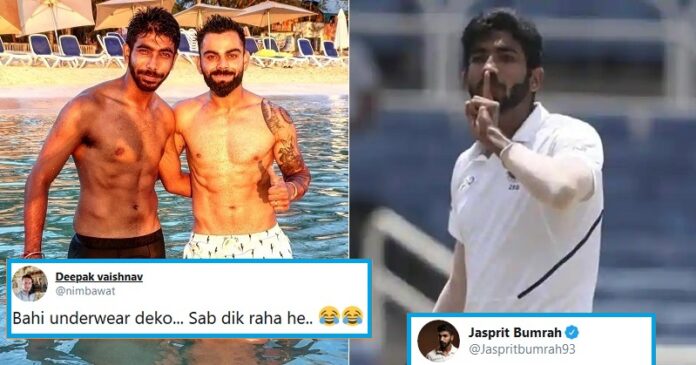 Our Indian cricketers share a great bond with each other because they spend a lot of time together. The Indian cricket team is like family. From sharing the common dressing rooms to traveling together, they always are with each other. When they are not playing, we often witness their great friendship on social media.

Jasprit Bumrah took to Twitter and shared a picture of himself some time ago with the Indian skipper, Virat Kohli. They both were soaking in the sunlight and flaunting their six-packs abs. Sharing the picture Bumrah wrote, “Sun-soaking with @imVkohli and the team.”

Sun soaking with @imVkohli and the team. 🌊🌊 pic.twitter.com/XHGKJ7SGou

While the picture was too good, some people didn’t miss looking at Bumrah’s innerwear. They felt it was transparent. And, they started trolling Bumrah terribly.

Check out some of the comments:

Soon Bumarah took Instagram and gave a befitting reply to all the trollers by saying it was all about “light and shadow”.

He said on the Instagram story, “Fun fact: The understanding of lights and shadows isn’t common these days. Hope people recover from it soon.”

Below is the screenshot: