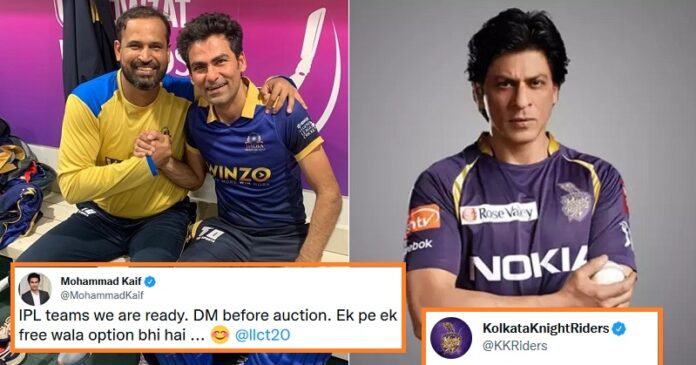 To play in the upcoming season of the IPL, former India cricketer Mohammad Kaif has jokingly stated that he and Yusuf Pathan are available. In the ongoing inaugural edition of Legends League Cricket (LLC), both players are featuring the Indian Maharajas. Kaif amassed an unbeaten 42 while Pathan scored 80 runs off just 40 balls. After the team was tottering at 34/3 at one stage, both the batters stitched a partnership of 117 for the fourth wicket.

Thanks to Upul Tharanga (66) and Misbah-ul-Haq (44*), Asia Lions posted a total of 175/7 while batting first. For India, Manpreet Gony took three wickets, Munaf Patel, and Stuart Binny took one each, and Irfan Pathan scalped a couple as well. In reply, the Mohammad Kaif-led side had a poor start. They lost the wickets of S. Badrinath (0), Stuart Binny (10), and Naman Ojha (20) cheaply.

With five balls to spare, the fourth wicket partnership between Mohammad Kaif and Yusuf Pathan made sure the team went over the line. In just 10 deliveries, Irfan played a cameo of unbeaten 21. Now on January 24, both the teams will face each other again.

After winning that match, Kaif posted a picture of him and Yusuf Pathan stating that both the players are ready to play the IPL. Kaif took to his Twitter handler and tweeted, “IPL teams we are ready. DM before the auction. Ek pe ek free wala option bhi hai ….”

After seeing Kaif’s tweet, the 2012 and 2014 winners Kolkata Knight Riders (KKR) were quick to give a funny response. With a caption, “Offer toh zabardast hai! #IPLAuction,” they posted a GIF video that read “Bhai Wah.”

Previously, both the players have played for different teams in the IPL. In 2008 and 2009, Kaif has played for Rajasthan Royals. However, he moved to Kings XI Punjab in 2010. After that, he was bought by Royal Challengers Bangalore in 2011 and played for the side till the 2013 season. Apart from that, in the now-defunct Gujarat Lions in the 2017 season, he has worked as an assistant coach to Brad Hodge. In 2019 and 2020, he also worked as an assistant coach for Delhi Capitals.

If we talk about Yusuf Pathan, he also played alongside Kaif in the Royals set-up. In 2008, they were part of the inaugural champions side. He moved to Kolkata Knight Riders in 2011 and kept playing till 2017. He was bought by Sunrisers Hyderabad in 2018 and played for the team till 2019. However, he announced his retirement from all forms of the game in February last year.

Netizens went crazy after seeing the tweet of Mohammad Kaif and many of them requested to bring Yusuf Pathan Back in the game. One Twitter user tweeted, “KKR deserves such players” while another user wrote, “KKR, please bring Yusuf Pathan back.” Check out some of the reactions of netizens.

Both u n Pathan Bhai r needed now in our middle order which is so unstable at the moment! Yesterday we were 3 down early but the way u both played attacking cricket n stitched partnership,cricketers of this generation have to watch it!This is how 2 respond to an adversity!

If I were a franchise for kkr, definitely wish for Kaif Sir with Pathan brothers.really u three are special made India proud so many times and still u are. Love and respect for……u