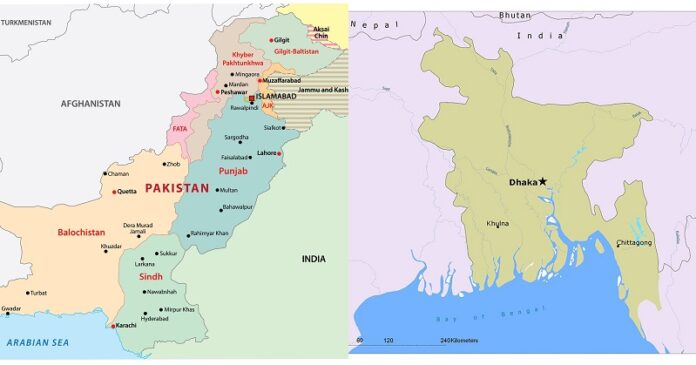 To know more, continue to read our article about India’s neighbors with facts and the help of various neighboring countries of India map.

The first of the 9 neighboring countries on the list is Afghanistan that shares the border with POK Jammu and Kashmir. The capital of the country is Kabul. The relationship between Afghanistan and India share cultural bonds through Bollywood and cricket. India was one of the biggest aids to the country to overthrow the Taliban and was the largest regional provider of humanitarian and reconstruction aid to help Afghanistan.

The next on our list of neighboring countries of India and their capital is Bangladesh that shares its border with the Indian states of West Bengal, Mizoram, Meghalaya, Tripura, and Assam. The capital of Bangladesh is Dhaka. The Indo-Bangladesh relations started when India recognized an independent Bangladesh in 1971. The relations of the two countries are friendly and they are common participants of various groups like SAARC, BIMSTEC, IORA, and the Commonwealth. The cultural ties between the two countries are deep and the Indian state of West Bengal and Bangladesh are similar in some aspects because they both speak Bengali.

Bhutan is one of the 9 neighboring countries to India and has its capital in Thimphu. It shares its border with Arunachal Pradesh, Assam, Sikkim, and West Bengal. Bhutan and India share a special relationship. Bhutan is a protected state, however, it is not controlled or protected by another sovereign state. India has a big influence over Bhutan’s foreign policy, defense, and commerce.

The next country on the list of India with neighboring countries map is China. The capital of China is Beijing and China shares its border with Jammu and Kashmir, Himachal Pradesh, Uttarakhand, Sikkim, and Arunachal Pradesh. The Sino- Indian relations have peaceful documentation for thousands of years of recorded history. But under the rule of the Communist Party, the relations have seen several border disputes and economics and trade relations have become a point of contention between the nations.

Myanmar is among the neighboring countries of India. It shares the borders with the states of Arunachal Pradesh, Mizoram, and Nagaland. The capital of Myanmar is Naypyitaw. India and Myanmar relations have old historic, ethnic, and cultural ties. Over 1600km is the long land border that it shares with India along with the maritime border in the Bay of Bengal.

The next on the neighboring countries of India map list is Nepal. Kathmandu is the capital of Nepal and it shares its border with Sikkim, West Bengal, Bihar, Uttar Pradesh, and Uttrakhand. The relationship between the countries started with the 1950 Indo-Nepal Treaty of Peace and Friendship during which letters were exchanged that underlined the security, trade, and bilateral relations between the nations.

The next among the neighboring countries of India is Pakistan. Islamabad is the capital of Pakistan. The country shares its border with Jammu and Kashmir, Punjab, Gujarat, and Rajasthan. Out of all the other countries on the list, the relation between India and Pakistan is the most disturbed. Since the partition of British India in 1947, the Kashmir conflict started and paved the way for years of military conflicts and hatred.

The next on the list of India with neighboring countries map is the Maldives which has Male as its capital. The countries share their borders in the southwest part of the Indian Ocean below Lakshadweep Island. The relations between the countries have been friendly on all accounts of strategic, military, and economic cooperation. India majorly contributes to maintaining the security of the Maldives.

IPS Officers Responsibility, Power And The Perks They Enjoy