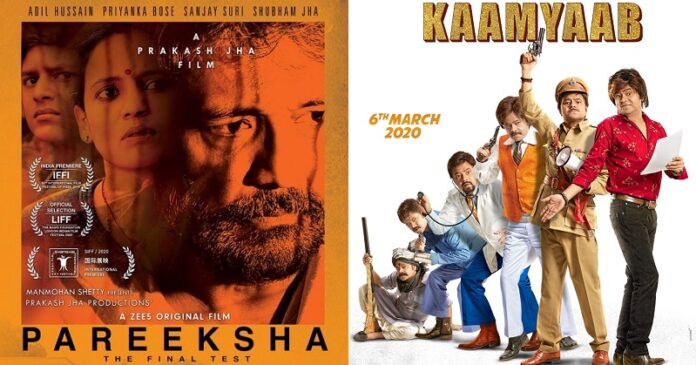 Because of the pandemic situation, the situation has become quite weird. Even though the most important part of the situation is to be safe and be inside the house, people do need some kind of entertainment to distract their minds off. And, what can be the better way to do that other than watching movies from the endless collection of OTT platforms.

On the one hand, there are superhit and commercially recognized movies. While on the other hand, there are some underrated Bollywood movies that are not yet recognized by the people. However, trust me, they are worth watching and promise great entertainment as well. So, to make things easier for you, we have gathered a list of must-watch underrated movies on the OTT platform that you will surely not regret watching.

Undoubtedly, Sanjay Mishra is one of the best actors in the Bollywood industry. No matter if he does one of the flop Bollywood movies or the superhit Bollywood movies, his work is always remarkable. And, that is what “Kaamyaab” is all about. Even though it is one of the underrated Hindi movies, this movie is an ode to the actor who is on the verge to get his retirement from his acting career.

The movie shows the real picture of the Bollywood industry and the supporting actors in it. “Kaamyaab,” tells that how important supporting actors really are and despite that, they do not get the name and fame they deserve. Without a doubt, Sanjay Mishra was in the limelight of the movie.

“Bhonsle” is one of the underrated Hindi movies that feature Manoj Bajpayee in the lead role as a retired cop, Ganpat Bhonsle. In the movie, Bhonsle is living in a dark shabby room in Churchill Chawl of Mumbai and struggling to get a service extension. This is one of the latest movies on OTT platform in India that shows the reality of human emotion. And, the audience will surely fall in love with Manoj Bajpayee after watching his brilliant performance.

“Pareeksha” is a movie on OTT platform that comes under one of the flop Bollywood movies. Even though this is a simple movie where a poor father wants to give proper education to his son in an English medium school, it shows the importance of education, honesty, and the consequences of dishonesty in life. It is a well-intentional film that is directed by director Prakash Jha in the year 2020.

Even though “Chippa” is one of the underrated Bollywood movies, it is an amazing film that revolves around an orphan boy. He wanders around the streets of Kolkata to find his father whom unfortunately, he never met. This movie showcases his wild childhood imagination and experiences while searching for his father.

“Axone” is one of the unique OTT platform movies that showcase how Northeastern Indians are being treated throughout the country. The movie talks about a group of Northeastern Indians who are living in Delhi and make their traditional dish “Axone” at their friend’s wedding. Unfortunately, things get messed up and they face a lot of difficulties. With a strong message and amazing storyline, it is a must-watch movie.

“Bahut Hua Samman” is yet another amazing movie by Sanjay Mishra that is one of the latest movies on OTT platform in India. The story revolves around the two friends of engineering students who are looking for ways to make instant money. However, they rather get trapped in a messy situation. This movie is the perfect example of satire and toxic political references.

“Bulbbul” is an Anushka Sharma production and Anvita Dutta’s directorial film that was liked and appreciated by a section of the society. It is a movie on OTT platform that created a buzz even before getting released. This movie showcases the story of a young girl who turns into an enigmatic woman. Unfortunately, she is tortured by her aged husband because he has the power.

“Chaman Bahaar” is one of the best OTT platform movies that feature Jitendra Kumar. With some of the notable performances, he is the gem of his field. The story of this movie revolves around a paan-wala and his love story.

“Choked: Paisa Bolta Hai” is a story of a middle-class family with a working mother and a stay-at-home father. The family faces constant financial problems and then, the mother gets a strange solution to their problems. Even though this movie is one of the underrated Bollywood movies, it is a must-watch.

When it comes to martial arts and action sequences, nobody can be compared to the actor Vidyut Jammwal. Even though his movie “Khuda Hafiz” is focused on action, it is a bit different than his other movies. His acting is quite remarkable in this movie and that makes it worth watching.