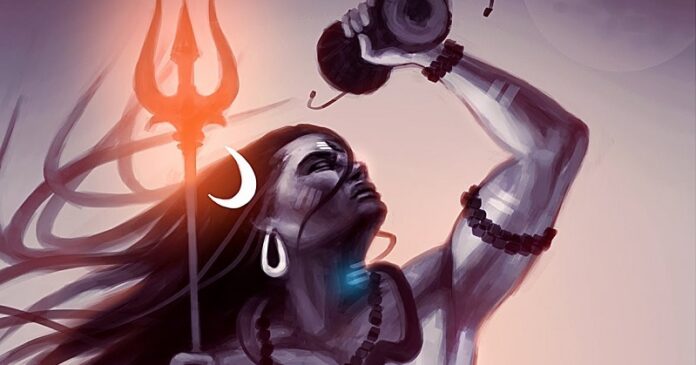 Here’s a god who breaks everything that is considered taboo in religion, makes mistakes, and deals with them fearlessly and calmly. He is certainly not the sucker of rules, breaks all stereotypes, and fairly easy to please being a God. He has a crazy mix of anger and calm, meditates most of the time, and likes to mind his own business. He is someone whose stories appeal to every generation of people and is extremely popular with the young and the old alike.

He is none other than LORD SHIVA!!!

Here are some interesting stories and legends about Lord Shiva that proves that he is the coolest god ever. Take a look at them:

1. Son Of Anjana And Kesari, Hanuman Is Actually An Avatar Of Lord Shiva

According to several texts, Hanuman is an incarnation of the god Shiva. He is the eleventh avatar of Lord Shiva. He is known for his devotion to Lord Rama. Hanuman is blessed by the Hindu God of wind, Vayu, and the son of Anjana and Kesari.

2. The Primary Antagonist In The Hindu Epic Ramayana, Ravana Was One Of The Greatest Devotees Of Lord Shiva

It is said that Shiva trapped Ravana beneath Kailash when he tried to uproot Mount Kailash. Ravana started pleasing Shiva to redeem himself by playing instruments and singing hymns. Eventually, Shiva freed him from under the mountain after many years and blessed him.

3. Even The Hindu God Of Love And Cupid’s Equivalent, Kamadeva Could Not Distract Shiva Successfully With His Tricks

Devas needed Shiva’s help when they were waging a war against Tarakasur. But Shiva was busy meditating at that time. So the Devas persuaded Kamadeva to pierce Shiva with his love arrows. Then, Shiva woke up from meditation in rage and turned Kamadeva into ashes through his third eye.

4. Sati, Lord Shiva’s First Wife Sacrificed Herself Because She Was Infuriated With Her Father Who Insulted Shiva

As per mythology, Sati was the first wife of Shiva. She was very fond of him. Her father did not approve of Shiva for marriage. Sati’s father decided to perform a sacrifice. However, he invited everyone, but Shiva. This insult really bothered Sati and she sacrificed herself. Shiva got furious and killed her father.

Shiva is the symbol of calm and peace and snow, mountain, and snake around his neck symbolizes the same.

Lord Shiva’s Trident or Trishul unites the three worlds of a human being. It is associated with the broader world, the immediate world around him, and his inside world.

7. One Of The Primary Offerings In Shiva’s Worship Is Ganja/Cannabis

On the auspicious day of Shivaratri, the devotees of Lord Shiva consume Bhang and smoke weed. It is one of the popular offerings to Lord Shiva.

Apasmara is the symbol of ignorance which is also called a “dwarf demon”, challenged Lord Shiva. Then, Lord Shiva took the form of Natraja and crushed the arrogant Apasmara under his right foot by performing the dance of destruction, Tandava. However, Shiva forever remains in his Nataraja form to preserve the balance between ignorance and knowledge. Lord Shiva’s Nataraja avatar gives a message that ignorance can only be defeated by dance, music, and knowledge.

Ardhanarishwar form is a half male and half female icon which is an example of a perfect marriage. Shiva along with Parvati is represented in the Ardhanarishwar form. This androgynous form shows that the feminine energy and masculine energy of the universe in a synthesis.

10. Nandi Was Offered To Lord Shiva By Other Gods And He Accepted Him As His Doorkeeper And His Vehicle

As per several texts, the mother of all cows, Surabhi started giving birth to a lot of cows. The cows started flooding Kailash with their milk. Angry Shiva destroyed many of them with his third eye. The other gods offered Nandi to Shiva to calm him down.

11. Lord Shiva Is Naked And Sports An Erect Phallus

Shiva is naked and sports an erect phallus according to Devdutt Pattanaik in Epified. He clothes himself in animal clothes to save the public from any discomfort. He aroused and disconnected from the outside world not by external stimulation but by internal bliss.

12. The Ash On Lord Shiva Symbolizes Permanence And Destruction

Ash is created by burnt things but cannot be burnt itself. It indicates the permanence of the immortal soul. That is why it is smeared all over Lord Shiva.

13. The Three Lines Of Ash On His Forehead Indicates The Destruction Of The Three Worlds

14. Lord Shiva Drank Halahala Poison Because Of Which He Has A Blue Throat

In order to obtain Amrit, the Asuras, and Devas started churning the milky ocean. During churning, they found a fatal poison – the Halahala poison. It had to be sucked out of the ocean to get Amrit. Without thinking, Shiva drank all the poison. At that time, Parvati pressed his throat to prevent it from spreading to his other body parts.

15. The Story Of The Infinite Pillar Of Fire

There was a conflict between Vishu and Brahma regarding who the real God was. To conclude, Shiva appeared as an infinite Linga fire-pillar. Vishnu tried to find the bottom of the linga and Brahma, the bottom. Later, Vishnu returned back and admitted that it is endless, but Brahma lied and claimed that he was the true God. Instantly, Shiva broke the pillar and appeared. He appreciated Vishnu for his honesty and accused Brahma of lying. He stated that Vishnu is on the right path of becoming the god.

16. In The Amarnath Cave, Shiva Explained The Secret Of Life And Eternity To Parvati

It is believed that Amarnath cave is the place where Shiva explained the secret of life and eternity to Parvati. Many devotees and followers, visit Amarnath every year. It also houses an ice stalagmite Lingam.

17. Shiva Was Attracted To Mohini, Vishnu’s Female Form Which Resulted In The Birth Of Ayyappa

According to the Bhagavata Purana, Vishnu deceived the demons in his female form. After that, Shiva wanted to see the fearless Mohini again. Shiva got lured by Mohini when Vishnu revealed his Mohini form. Shiva got overcome by the Kama and his seed escaped and fell on the ground. From that seed, Ayyappa was born.

18. Because Of Ganga’s Arrogance, Shiva Trapped Ganga Back In His Hair

Bhagiratha wanted to perform a ceremony for his ancestors, so he asked Brahma to bring the river Ganges down to earth. He asked Bhagiratha to propitiate Lord Shiva because he could only break Ganga’s landfall. While Ganga arrogantly flew down to earth, Shiva trapped her back in his hair. He let her out in small streams.

19. Lord Shiva Punished One Crore Gods And Goddesses For Not Waking Up On Time And Transformed Them Into Stone Images

Lord Shiva along with one crore gods and goddesses was on his way to Kashi. Before taking a night’s rest in Unakoti, Tripura, he asked all of them to wake up before sunrise. However, no one except Shiva woke up in the morning. Then, he set out for Kashi on his own in rage and cursed them to become stone images.