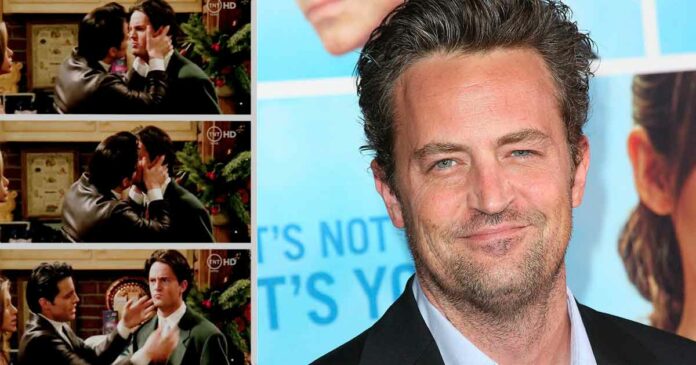 Did you too assume that Chandler might turn out to be g@y after a few episodes? Well, in the show many of his friends and colleagues assumed him to be g@y at the first meet. But, he eventually proved everyone wrong.

We don’t say there’s anything wrong with being g@y as everyone is free to choose their own life. Going with the same notion, Friends’ creators too respected Matthew’s views on this subject. The character he played named Chandler surely had some elements to give away a g@yish charm and the showrunners had few more things to add to it. They planned a storyline wherein Chandler would visit a g@y bar because he liked the tuna melts they served!

Just imagine how weird it would be to see Chandler walking into a g@y bar and asking for tuna melts in there. And while he is waiting for his dish to appear, someone would try to hit on him and strike a spicy conversation or even something more, who knows! Desperately trying to avoid the man, he will be calling for the waiter to come up with his order soon. And once the order comes in we can expect to see Chandler running hard like he was running for his life!

But Matthew Perry opposed to the storyline and so the creators of the show had to discard the idea. Adding such a storyline might have brought laughter but maybe at the cost of undermining the community. Friends have been a subject of debate on many occasions. Some feel offended with the dialogues and comments Chandler had to face for his character having some not-so-manly qualities. Even Chandler’s father in the show didn’t like the treatment she received on the show.

Kathleen Turner, chandler’s father in Friends, voiced out about her time in the show and we have it recorded in our list of confessions by Friends cast. Click here to read all 15 shocking confessions made by the cast of Friends.

The reason why Matthew Perry denied the storyline isn’t clear but looks like it was for the good of everyone. It’s praiseworthy that the show creators considered the views of Matthew and accepted his voice. They could have forced him to do the scene as it would have brought a lot of laughs but they didn’t. It again proved that they wanted to create history and had the vision to last longer in history than anyone could ever imagine. In case if you are wondering, how we know this stuff then you would be surprised to know that there’s a book available that discloses such internal secrets and stories from the show.

The book named Generation Friends: An Inside Look At The Show is written by Saul Austerlitz. In this book, Saul has listed some untold and exclusive stories that were never known to Fans. To gather this information he conducted exclusive interviews with the creators of the show David Crane and Marta Kauffman, director James Burrows, executive producer Kevin Bright, and even the writers and cast members from the show. He has retold how the scenes came about during 10 years of the NBC phenomenon, Friends.

In the book, Saul describes, ‘Perry said no, and the story was shelved.’ This gives us light into the work culture of the show and also says how cool the creators were to have considered the consent of the actors for every scene.

There are many reasons why Friends is so successful and one of them is the freedom to express and permission to be the original self in the show. Many times it feels like the cast didn’t have to act, rather they were being themselves and that made things wonderful. Everyone had a voice, the actors could improvise lines, suggest ideas, and help each other to be better. Everyone was supportive and wanted to enjoy the shoots rather than considering it work.

It’s probably the work culture given by the showrunners that helped make the show a success. When everyone feels good, they can perform well!