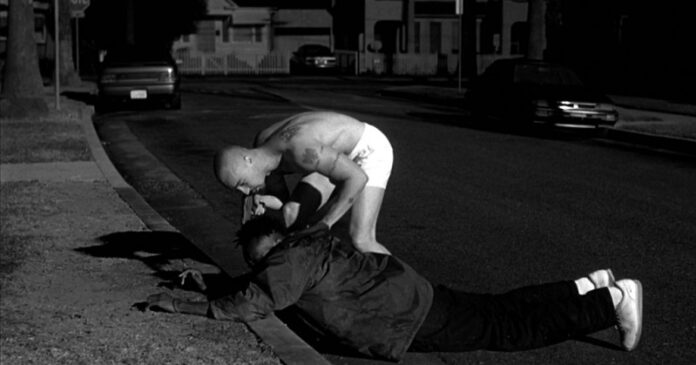 We delight in watching violence on screen. From the Avengers beating the shit out of Thanos to the shenanigans of Looney Tunes cartoons, moviegoers get a kick out of people getting a kick. Perhaps we enjoy this extreme action because we know that all these are fake. It appears as the actual stake is quite low. However, we are here to examine that what happens when filmmakers turn this dial past the breaking point. Some movie scenes have captured our imagination for all the wrong reasons. These have gained notoriety of their own, either for being too sexual, too bloody, or too weird.

Scroll through to check out the most disturbing movie scenes that no sound person would be able to sit through.

In this movie, a young widow meets a 10-year-old boy and claims that he is her reincarnated husband. In a scene, the young boy undresses and joins her in the bathtub. This scene caused controversy for its pedophilic overtones. Later, the filmmakers clarified the scene and said that it was shot separately, and they also used special clothes.

2. Requiem For A Dream – The Sex Performance

This entire film is one harrowing moment after another. It is set in the rotting belly of hyper drug addiction. In a scene of the movie, Jennifer Connelly’s character agrees to double-team a sex toy with another woman and that too in front of hordes of men because she was desperate for heroin. It’s a highly disturbing sequence and caused quite an uproar, highlighting the death throes of withdrawal.

It is a 1971 Stanley Kubrick film that spoke of ultra-violence from the onset. Its main characters, the Droogs indulge in all manner of sadistic practices. In a scene in the movie, Alex and his cohorts break into the house of a handicapped author. They rape his wife while the song “Singin’ in the Rain” plays. This scene was a massive controversy, and the film faced many protests. It is was even banned in the UK.

Well, this entire film was pretty much controversial, but the scene where the adult fascists make the young boys eat a feast of feces brutally and then assault them sexually in their room was difficult to watch for even the stone-hearted viewers. As a result, this movie was banned in many countries.

5. The Human Centipede – When The Front Person Has To Defecate

This movie is kind of weird and disgusting. There is a mad scientist who stitches 3 unfortunate victims together ass-to-mouth. This thing was already disturbing enough, but then he forced the front person to defecate, and the 2 behind have to eat it. This was literally hard to swallow. While this scene was edited out in some countries, some countries banned the entire film.

In this French movie, a brutal and agonizing long sexual assault scene takes place in an alley. In the scene, after leaving the club, Monica Belluci’s character is accosted by a ruthless sadist. He assaults her sexually and then beats her to a pulp. This scene caused a lot of controversies.

7. Cannibal Holocaust- The Gutting Of A Turtle

This 1980 film has been consistently in controversy since its release. This movie is about a rescue mission to the Amazon. However, in one scene, a group of Americans rips off a turtle’s shell, slice off its limbs, and brutalize it in every way. And the worst part is, it was an actual turtle.

We all cringe with vicarious pain and horror at this scene. In this scene, Edward Norton’s neo-nazi character forces a black man to put his mouth on the curb. He then proceeds to bash his head in. This particular scene caused quite an uproar for its sheer viciousness and brutality.

This is a seminal 1979 war film. It influenced actors, storylines, and even generations to come. But, the end of the film created a lot of controversies. In the scene, soldiers perform a ritual. In the ritual, they have to sacrifice buffalo, in which they slaughter a water buffalo. Well, the brutal part is that they killed an actual water buffalo for this scene. This lead to protests by animal rights groups.

10. The Godfather – A Real Horse’s Head Was Used

This mafia movie too featured an infamous scene. In the scene, the Don leaves the head of a horse in the owner’s bed as a pressure tactic. Little did most people know that it was an actual head from a real horse. It caused quite a furor when this information was made public.