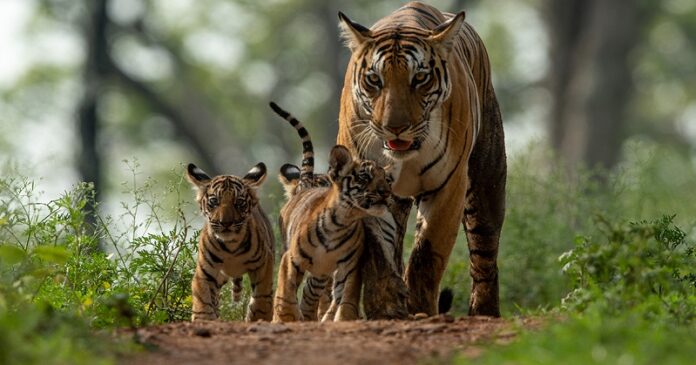 India’s vast forest cover is distributed unevenly across the country, it can be challenging to distribute these national parks in India state-by-state. However, we attempted to include one from each large state. Before you go on a wildlife-watching expedition, check out our list of the greatest national parks and wildlife sanctuaries in India.

Here is the list of some of the Amazing National Parks of India.

Jim Corbett National Park, located near Nainital, is a popular location for those wishing to see tigers, making it one of India’s most important national parks. There are also various kinds of deer, leopards, jackals, red foxes, black bears, sloth bears, and monkeys can be found here. Tourists can schedule jeep excursions for the early mornings and late afternoons. In case you didn’t know, it is India’s first national park. The park is organized into four zones: Durgadevi, Dhikala, Jhirna, and Bijrani, and spans an area of 520 square kilometers. All four of them are excellent places to see a tiger in its natural habitat. There is also the option of trekking around the park, but with a guide.

How to get there: Well connected by road and rail to Delhi, Nainital, Moradabad, and others.

Kaziranga National Park, popularly known as the “Big Five” sanctuary, is an excellent area to see wild species such as rhinoceros, tigers, elephants, wild buffalo, and swamp deer. Unlike Hemis, India’s highest national park, this reserve is home to certain common hills animal and bird species. The park, which covers an area of 378 square kilometers, is also home to bears, leopards, and various types of indigenous and migratory birds, but the major draw remains the one-horned rhino.

How to get there: Well connected to Kohara, the closest town, by road.

One of the best sites to witness wild Asiatic lions in their natural habitat is in Gujarat’s Gir Forest National Park and Wildlife Sanctuary. Before becoming a sanctuary in 1990, it was a hunting reserve for the Nawabs of Junagadh. When the project began, there were just 12 lions, but the population has since grown to almost 600. Here you can witness sambar, chinkara, chital, porcupine, wild boar, black deer, and other animals.

How to get there: Well connected by roads to Rajkot and other cities.

Sundarban National Park is a Tiger and Biosphere Reserve located in West Bengal’s Ganges Delta. Its famous mangrove forest is one of the most popular tourist attractions in India, making it one of the most visited national parks and wildlife sanctuaries. The Bengal tiger, saltwater crocodile, wild boars, foxes, leopard cats, giant turtles, Ganges river dolphins, and a wide range of native and migratory birds, as well as a wide range of mammals and reptiles, can all be observed.

Best season to visit: December to February, the park remains open from September to March

How to get there: Gosaba is the nearest town from where it is connected by road. Tourists can also take the motorboat from Canning, which is the nearest railway station.

Price: Entry for Indians is free, although hiring a boat will cost you between 1000 to 2000 INR for a day

Satpura National Park, with a size of 524 square kilometers, is home to a topography unlike any other, with sandstone peaks, lush woods, tight valleys, and deep ravines. Leopards, wild boars, bears, blackbuck, numerous types of deer, and a diversity of bird species can all be seen here. Tigers and barasinghas have also been spotted. Tourists can go on a car safari or an elephant safari, as well as boating and strolling trips.

Eravikulam National Park in Munnar, which covers an area of 97 square kilometers, protects the endangered Nilgiri Thar. It is one of the most beautiful national parks in south India and is home to elephants, deer, jackals, leopards, tigers, otters, mongooses, and a wide variety of birds and butterflies. Anamudi Summit, South India’s tallest peak, is also included within the national park.

Best season to visit: September to November, and April to June

How to get there: It is a mere 15 km from Munnar, and well connected by road

The Pench National Park, which is a refuge for Royal Bengal Tigers, is another must-see national park in Madhya Pradesh. The park is also renowned among rafting enthusiasts. It is also the location for Rudyard Kipling’s classic novel “The Jungle Book.” One of India’s most famous national parks.

Best time to visit: November to May

How to get there: Seoni, the closest city, is well connected by road.

Price: Under INR 100 for Indians with a guide, INR 150 per vehicle for foreigners

The Sariska National Park in Rajasthan is a safe haven for Royal Bengal Tigers. It covers an area of 866 square kilometers and has a rocky topography. The scrub thorns in the forest help travelers discover the elusive “lord of the jungle.” Leopards, striped hyenas, wild boars, jackals, serpent eagles, monkeys, hares, and numerous types of deer are among the other creatures that can be seen here.

How to get there: Well connected by road to Hindaun, Jaipur, and Delhi.

Kanha National Park, which covers an area of more than 1,945 square kilometers, was one of the first national parks in India to collaborate with Project Tiger. It is one of India’s national parks, as well as a haven for the Barasingha, and is regarded as one of Asia’s best-kept national parks. It is separated into two sections, Banjar and Hallon, named after the rivers that run through it. Kisli, Sari, Mukki, and Kanha Zones are all independent zones here.

How to get there: Well connected by road from Nagpur and Jabalpur

Ranthambore National Park is one of the largest national parks in North India, covering an area of 392 square kilometers. It is part of Project Tiger and has been a Royal Bengal Tiger refuge since 1974. The national park also has a fortification on its grounds, which is a major tourist destination. Aside from tigers, visitors can also see bears, leopards, jackals, elephants, striped hyenas, bison, monkeys, and several sorts of deer.

Best time to visit: October to May

How to get there: Sawai Madhopur is the closest town and well connected via road

Famous For: Different species of snakes

Bandhavgarh is probably best known as India’s largest tiger reserve. This reserve, located in Madhya Pradesh inside a gorgeous forest, is famed for holding the most Royal Bengal Tigers in the world. In fact, you’re more likely to see these gorgeous creatures here than in any other tiger reserve in the country, making this a must-see for all wildlife fans. This park is home to around 22 species of mammals and 250 kinds of birds, in addition to 44-49 tigers (according to the most recent record).

How to get there: The nearest railhead is at Umaria 35 km away, while the nearest airport is at Khajuraho 270 km. You can take a cab from these two places.

The beautiful green Bandipur National Park, located on the borders of Karnataka, is the jewel of the Nilgiris and was designated as a protected reserve in 1974. This site has recently achieved significant fame on the map of national parks in India, thanks to its verdant canopy of deciduous woods that provide refuge to a diverse range of species and vegetation.

Best time to visit: October – May

How to get there: The nearest airport is the Bangalore Airport, while the nearest railway station is in Mysore 80 km away. One can take a bus from Bangalore or Mysore.

This enchanting national park in Karnataka’s Mysore district, located near Bandipur National Park, contains a diverse wildlife population that includes both vegetation and fauna. It is home to about 250 bird species as well as creatures such as elephants, tigers, jackals, gaurs, panthers, sambars, mongooses, spotted deer, sloth bears, civet cats, and hyenas. The location provides lush green forests, small valleys, and gentle hills, making it a true paradise for nature lovers and those seeking serenity.

Best Time To Visit: April to May

How To Get There: Tourists can take a taxi from Mysore or buses which ply from Mysore till HD Kote which lies at a distance of about 30 km from the park.

The 257-square-mile Periyar National Park in Thekkady, Kerala, is India’s best-protected reserve region. The stunning park is home to a diverse range of animals, including magnificent elephants and royal tigers, as well as a plethora of fish, reptiles, and birds. The park got famous for its tranquility and lush vegetation, and it is a wonderful blend of adventure and beauty. It is most certainly the largest national park in India. Bamboo Rafting, Jungle Patrol, Bamboo Grove, Periyar Tiger Trail, Jungle camp, Border hiking, Jungle Inn, and Bullock Cart discoveries are among the eco-tourism activities available.

How To Get There: The nearest railhead is in Kottayam, 114 km away while the nearest airport to the park is Madurai which is at a distance of 136 km. You can take a cab from both these places.

Manas National Park is a UNESCO Natural World Heritage site, a Project Tiger Reserve, an Elephant Reserve, and a Biosphere Reserve in Assam. This reserve got well-known for its breathtaking views, natural surroundings, and diverse animals, including the rare golden langur and red panda. Tigers and rhinos can be easily identified while riding an elephant. The park is also notable for maintaining the most Indian endangered species listed in the IUCN Red Book. The Nagarjunagar-Srisailam Tiger Reserve is India’s largest tiger reserve, in case you didn’t know.

How To Get There: Lokpriya Gopinath Bordoloi International Airport (GAU) is located 91 km away from the Park while the place is also accessible from Guwahati, Kaziranga, Darjeeling, Shillong, and Siliguri.

Price: INR 20 for Indians and INR 250 for foreign tourists

Famous For: It is a UNESCO world heritage site