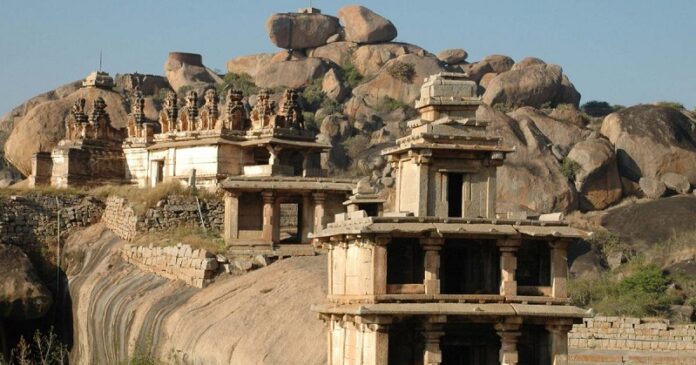 Karnataka is all about the rich heritage and cultural significance. And, their rich heritage and culture are reflected in the forts. Several centuries ago, these forts were built by different rulers and represent splendor in all forms. Even though some are in ruin, some have been restored. Karnataka forts are a popular tourist spot in the city and attract the attention of tourists worldwide. The majestic forts of Karnataka are known for their stunning architecture, strong fortifications, and mesmerizing designs.

To make it easier for you, we have made a list of famous forts in Karnataka that you must visit once in your lifetime.

Anegondi Fort is one of the famous forts in Karnataka that is a part of the Hampi World Heritage Site. In this beautiful fort, the river Aghanashini of North Kanara district joins other two small rivers. The major attractions of this place are the Huchappayana matha temple, Pampa Sarovara, Navabrindavan, Ranganatha temple, and Kamal Mahal.

Bidar Fort is one of the popular forts in Karnataka that was overcome by the Mughal forces under Aurangzeb in 1656. Before the kingdom disintegrated into the smaller states, Bidar was the capital of the Bahmani kingdom of Deccan. The major attractions of the fort are the Rangin Mahal, the imposing gates, and the ramparts. It is a must-visit place while in Karnataka.

Gulbarga Fort is one of the most renowned forts of Karnataka that attracts many tourists from around the country. From 1347 till 1428, Gulbarga was famous as the Capital of the Bahmani kingdom. Earlier, it was a beautiful fort with magnificent beauty. However, it is now in ruins now. Regardless of that, it shows the history of our country and is considered one of the important forts in India.

Kittur Fort is one of the Karnataka forts that is located in the Belgaum district in Karnataka. If you don’t know, it is a major archaeological site as well as is the former capital of a minor principality. It has a rich collection of antiquities found in and around Kittur. Apart from that, the place has a Nathapanthi matha in the police line area.

In Hassan District of Karnataka, Manjarabad Fort has situated about 7 km from Sakleshpur. That is why it is easily accessed from Sakleshpur Railway Station as well as Bus Station. In 1972, this fort was constructed by Tipu Sultan. As per the locals, a local chieftain, Manje Gowda initially owned the fort. However, later, Tipu took the place and built this fort at the end of the 17th century AD. To know the history of India, you must visit this fort.

Nandi Hill Fort is a beautiful fort that is situated in the Chikkaballapur district of Karnataka state. Due to its beautiful and easily accessible location, it is rapidly developing numerous commercial and residential ventures. This is called Nandi Hill Fort because an ancient Nandi temple is situated on this hill. Besides that, this hill also adorns ancient lord Shiva and Parvati temple.

Raichur Fort is located between Krishna and Tungabhadra rivers. This fort showcases the rich history of various empires such as the Bahmanis and Vijayanagara. If you don’t know, the fort of Raichur was built by Kakatiya king Rudra in 1284 CE. It is a beautiful fort in Karnataka that has Maavina Kere Raichur Aam Talab mango beach nearby.

Ucchangi Fort is one of the famous forts of Karnataka that is located in the Chitradurga district of Karnataka. Besides its beauty and amazing culture, this place is quite famous for Ucchangi Ellamma temple. This is a fort that ruins on the top of this hillock. To reach the temple of Goddess Durga, you need to trek the hillock. Undoubtedly, it is a must-visit place in Karnataka.

Vijayanagar Fort is one of the popular historic monuments in India. It is situated in the Thanjavur district of Karnataka. In the early phase of the 16th Century, Vijay Raghav, one of the Nayak kings constructed a part of Vijaynagara Fort and later it was completed by the Maratha rulers. Even though this fort is ruined now, some part of the Vijayanagar Fort is open for tourists.