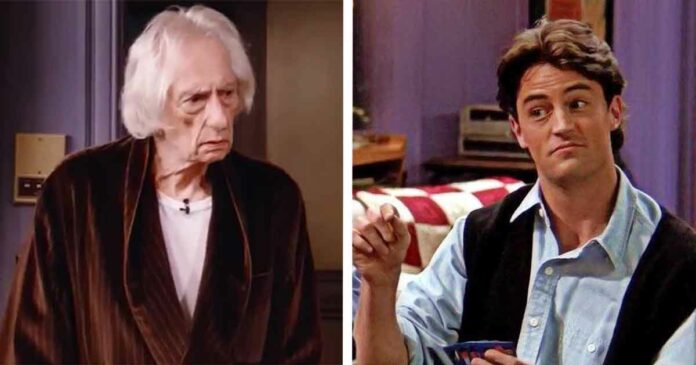 It’s been 17 years that the iconic show FRIENDS got off-air. It still is one of the most popular shows. The six main characters of the show are flawed in their own unique way. They fight and get on each other’s nerves just like real-life friends. It just makes them more relatable and hilarious at the same time. Even though everything seems perfect, not every character on FRIENDS is that way. Whether they’re annoying family members, the grouchy guy who lives downstairs, or romantic flings that don’t go the distance. Throughout its run, the show had many supporting characters to make the show more interesting. However, some of them are shown in the series time and again, but they all stink.

So, here we have pulled out some of the most hated supporting characters from the show with whom we would never want to hang out or be friends. Let’s be clear that the list has nothing to do with the comic nature of the character. There might be a few characters who are loved for their comic sense but given their personality or habits, they are on this list. Let’s scroll through the list:

In the beginning, Joey was dating Kathy and Chandler started having certain feelings for her. It appeared like Kathy and Chandler are far more compatible than she’s with Joey. Ultimately, their mutual attraction creates an awkward love triangle among Kathy, Joey, and Chandler. Kathy claims that she does not want to come between best friends and Chandler keeps his distance from her. But she did come between them, Joey had to be the bigger person, thereby giving them his blessings. Yet again, Kathy cheats on Chandler with another man. Apparently, she was not a big fan of fidelity.

Monica’s massive apartment is a dream come true, but it comes with a cranky weird guy living downstairs, Mr. Heckles. Although there is not much known about Heckles, he might have been a fun-loving class clown in his high school. Later, he winds up to be a hermit who only leaves his apartment to complain about the noise coming from Monica and Rachel’s place. His unwanted intervention and objections might seem very off-putting if you were his neighbor. Given his distinct attitude, he is the guy whom you would always like to keep distance with. Another quality that characterized him as a bad man, was his habit of claiming animals that didn’t belong to him.

Phoebe and Ursula are twin sisters who never got along and could easily go past years without speaking. Ursula not only asked Phoebe if she’d be interested to work in an adult movie but also withheld vital information about their upbringing such as information about their biological mother. Whenever Phoebe tried to reconnect with Ursula, she ended up being rejected and disappointed. Ursula is a reminder that how exceptional Phoebe is as a person.

As a child, Amy stole boyfriends of Rachel and as an adult, we saw her starting a girl fight on Thanksgiving dinner over a Ralph Lauren family discount. She didn’t visit Rachel in the hospital when she gave birth to Emma and still had the guts to ask for the custody of Emma after Ross and Rachel die. She is completely self-centered and incapable of accepting criticism. She usually retaliates with an insult and her total self-absorption is the catalyst for all of the conflict in the show. She would be a friend who always uses you and dumps you when there’s nothing left in you to give.

Dr. Green is fearless when it comes to being offensive and rude to strangers and pops up throughout the series. He chastises Ross for leaving a hefty tip, yells at a waiter, insinuates Phoebe was a lesbian, belittled Rachel and her life choices at every turn, and also called his unborn grandchild a “bastard”. Rachel was constantly trying to please him but it’s sad to know that Rachel’s childhood memories mainly consist of her father yelling. Even though Rachel was an independent woman, she constantly failed to gain her father’s approval.

At the start of season 6, when Chandler and Monica decided to move in together, Joey interviewed a bevy of beauties to be his new roommate and finally ended up with Janine. Despite being a dancer, her major job was to be hot and provide Joey with ample opportunities to hook up. She would have been forgotten if it wasn’t for her intense dislike of Chandler and Monica. Janine says to Joey that she’s not a fan of his two closest friends even after a pleasant double date. Her reasons for not liking them are quite murky. Her double-faced personality proves that she is not very pretty on the inside. And you would never like to have a friend like her in real life, or would you?

After Joey gets his big break during season 2 and lands a leading role on “Days of Our Lives”, he decided to move out. Chandler fills the empty space with a new roomie, Eddie. Eddie quickly becomes obsessed with gaslighting Chandler making his life z living hell. Eddie’s recent breakup made Chandler fall into a really crazy situation. His craziness is punctuated by a maniacal laugh and over-the-top antics such as keeping a goldfish cracker as a pet, watching Chandler’s sleep, etc. The only good thing that happened with Eddie coming in was that Chandler and Joey got to know how good they were as roommates together. Eddie is the kind of roommate that no one of us would dare to have in our entire life.

During season 4, Ross falls hard and fast for Emily, but their whirlwind romance comes to an end when he calls his bride “Rachel” at the altar. She went away and ditched on their reception and honeymoon. While Ross tried to win her back, she continually kept shooting him down. She started off as a sympathetic character, but soon she transformed into a jealous, controlling, and unreasonable woman, who demanded Ross to shift London and end up his friendship with Rachel. Ross goes to great lengths to win Emily’s heart but she never gave him that second chance he deserved.

Rachel’s younger sister, Jill Green is probably pretty similar to how Rachel was before she moved in with Monica and started her life over. She’s completely spoiled and takes everything for granted. After their father threatened to cut off Jill’s finances, she came in to live with her sister, Rachel. However, to spite Rachel, Jill ended up trying to date Ross and was an all-around annoying character.

Frank was Phoebe’s half-brother. She met him on one of her failed attempts to meet her father. Even though he didn’t appear for long on the show, he was an incredibly odd character. He dated his teacher which was quite unethical and the two eventually ended up getting married. Later he asked Phoebe to be the surrogate for their babies because Alice was unable to conceive. Things always got uncomfortable whenever Frank showed up. Starting from his romantic relationship with his teacher to his awkward relationship with his newfound sister Phoebe, nothing seemed to be normal. In fact, a brother like him would be really tough to have.