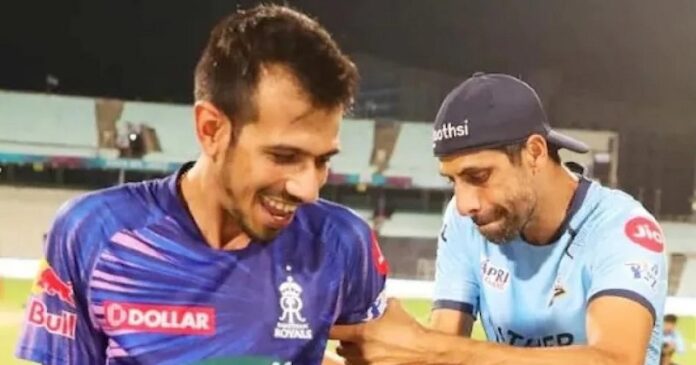 The head coach of Gujarat Titans Ashish Nehra has been receiving a lot of praise for the success of the new franchise. The maiden team lifted their first IPL trophy. The former India fast bowler known for his happy-go-lucky nature is lauded with praise for his unique style of coaching.

Well, Yuzvendra Chahal is one of the active players who share the same vibe as the Gujrat Titans head coach. it is. Chahal and Nehra are quite popular among their teammates for their jolly nature and the ability to brighten up the atmosphere wherever they go. There are no dull moments when one is with these two.

A video has gone viral on social media where both the star cricketers who were seemingly drunk and wasted were spotted having a funny exchange of conversation. The clip was shared by Instant Bollywood on their Instagram handle.

From the video, it can only be assumed that the players were heading out to attend a post-match party after the IPL 2022 final.

Chahal, the RR leggie, finished the IPL 2022 as the leading wicket-taker of the tournament. He was seen heading to his car along with his wife Dhanashree. As observed by the fans, Chahal’s body language gave away that he might have taken one too many drinks at that party and Nehra wasn’t too far behind either.

As Chahal was getting ready to get in his car, the GT head coach, Nehra approached him and asked him to join him on the bus. Nehra was heard saying in the video,

To which Yuzi replied:

“Bus mein nahi jaana mujhe (I don’t want to travel in the bus).”

When Nehra asked him the reason for not joining them on the bus, the 31-year-old spinner told him,

“Biwi ko kaha chor du main (How can I leave my wife alone).”

The post was flooded with their fans’ comments, most of them commented that the cricketers had consumed too much alcohol. Their hilarious conversation left fans in splits.

From June 9 Chahal will take on South Africa in a five-match series as part of India’s T20I squad at the Arun Jaitley Stadium in New Delhi.