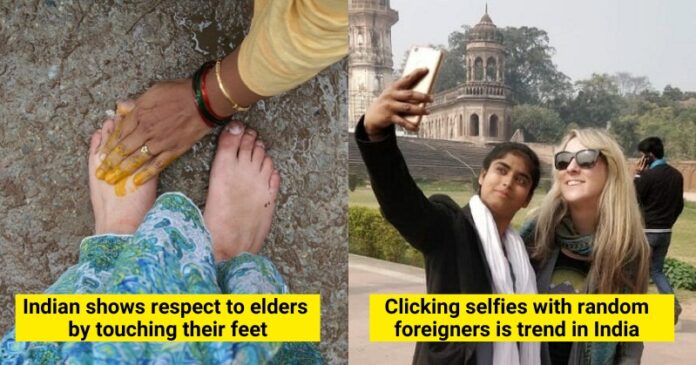 Everybody is proud of their cultural heritage. And it is not new that they wish to spread it around the globe. But sometimes few cultural things may be too weird for others to digest. India has introduced the world to Yoga, and the world has reached out to India and acknowledged its culture. India is unique in every sense; it has amazed the world with its cultural diversity, festivals, colors, and indeed spices. But sometimes, it may be too freaking weird for foreigners.
So, here is the list of a few Indian Things that are normal in India but weird for others.

Touching your elders’ feet is a sign of respect and a request for blessings. Though it is a beautiful ritual, many foreigners might find it very weird.

Well, yes. After taking a dump, Indians tend to use water instead of toilet paper. And honestly, we are proud of it.

3. Everyone Is My Aunty And Uncle

One thing that every person in India does is address elderly strangers with aunty or uncle.

4. How Many Languages Do You Speak Again?

In India, a single language can have hundreds of dialects. You can see people talking differently in every passing street.

5. No To Nuclear Families

Living in a joint family is very common in India. Children don’t move out when they turn 18.

This seat is Indian but also western. Not everyone uses it, but it still exists.

7. Where Did That Song Come From?

8. Let’s Take A Selfie, But Only If You Are A Foreigner

This trend might be embarrassing for many Indians, but few people literally click photos with foreigners just because they are not from the same land.

9. Clothes Till Their Last Breath

Every Indian household finds it hard to give a proper farewell to old clothes. We keep using old clothes until they are no longer clothes.

The reason behind shiny and bouncy Indian hair is coconut oil.

Every marriage ceremony has one thing peculiar. There is a ritual of the Bride’s sisters stealing the groom’s shoes during the wedding ceremony in India.

Indians are obsessed with wanting their children to pursue a career in the science stream.

Many uninterested adults still think that WWE is a sport and everything is real.

One thing that Indians have done mastery is putting spices in every dish and cuisine.

Though it is racist, things are changing. People buy fairness creams to get rid of their dark skin.

17. No Drinks On National Holiday

On National Holidays, the government has declared a “dry day,” and no one can sell alcohol.

Once you visit India, you can find people worshiping plants, trees, and animals (especially cows).

Daily soap operas are one of India’s biggest disasters ever produced. An illogical show can run for more than 15 years.

20. There Goes The Journalist Again

During political tension, journalists are often arrested for their ill behavior.

10 Romantic Chinese Series That Will Make You Fall In Love

11 Top Rated TV Shows In India, According To IMDb