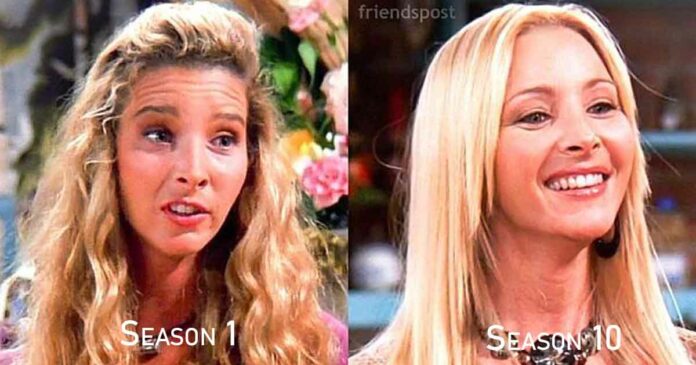 In FRIENDS, Phoebe was the most off-center one in the group. She was the hippy and the musician who would deny science and can cleanse her friend’s auras. However, like everyone, Phoebe went through some major changes throughout the years in this classic sitcom. She changed from being a single woman who “didn’t even have a pl….” to a successful, married, and settled woman in the end.

Obviously, that doesn’t mean she would be happy with every change she went through over the years in the show. Somethings like getting married or lead a normal life from start were the things she loved but others, not so much. Here is the list of few things that Season 1 Phoebe would have hated about finale Phoebe and few things she would be proud of. Let’s check out:

Proud Of: Found Her Family

In season one, Phoebe doesn’t think she has much of the family. She just had a grandmother and her twin and horrible sister, Ursula. But by the end of the show, she managed to find her birth mother with whom she built a real bond and found her father with whom she didn’t reconcile much. She also connected with her brother, and as a surrogate, have his babies. It is wonderful to see her discovering that she has more family than she thought and making these amazing connections with them.

Hate: Sold Out With Work

Phoebe was always a person with morals in the show. But by the end of it, she didn’t just give up on her musical dreams but also sold out with her massage business. Rachel finds out in the ninth season Phoebe is now working for a big corporate spa chain. Her reason was she likes stability and, also money is great. Well, this was a smart move on her part and for her career, but in season one, Pheobe would have hated this kind of chain environment.

Proud Of: In A Happy Relationship

Phoebe never had a normal family like normal people and she always wanted it. Phoebe from season one will be thrilled to find out that she does fall in love with an amazing man and gets her happily ever after in the end. Mike may be a late addition in the FRIENDS, but he’s a great one. Fans always adored that how he matches her energy and balances her quirkiness. Phoebe definitely deserved this support and relationship.

Hate: Turning Into A ‘Soccer Mom’

Phoebe realizes in the end that she really wants to be a ‘soccer mom’. She tells her friends that she actually wants to get married after all of the chaos of her early life and be a bit more traditional. Well, it is amazing that she actually realizes it and manages to get her happy ending. However, Phoebe of season one would be furious that she turns into this person because she hasn’t had this lightbulb moment yet.

Proud Of: Finally Standing Up To Ursula

Hate: Given Up On Music

Phoebe is always playing at Central Perk in the early seasons of the show. She keeps writing songs for her friends and talking about her musical dreams. But as long the show goes on, she seems to set aside her musical passion. She hasn’t completely given up the music but we hardly see her playing. While Mike, her husband is making a career as a piano player at the end of the series, she just seems to have given things up.

Proud Of: Learning To Ride A Bike

It is heartbreaking to know that she didn’t have a bike in her childhood. Ross felt that and bought Phoebe a bike as a sweet gift. However, later the gang realizes that she doesn’t really know how to ride one. Well, it was not surprising to give her stories about her childhood. Pheobe tries to hide this at first from her friends, but she allows Ross to teach her how to ride in the end. Phoebe of season one would be proud of learning that skill.

Hate: What Happened To Smelly Cat

Phoebe is way too dedicated to her music in the earlier seasons of the show. Even though her songs are surely far from mainstream, but she always wanted to make it big. Well, she did have one song that became a kind of hit, Smelly Cat. However, she ended up selling the “Smelly Cat” song to a cat litter company when she reconnected with an old friend who wrote jingles for ads. Later, with someone else doing the singing, it was going to be converted into an actual pop song.

Proud Of: Made Up For Mugging Ross

Fans discovered in season nine that Phoebe used to mug teenagers for money. And Ross was one of her victims back in the days. Phoebe certainly wasn’t proud of her actions in the past and it also caused a major issue between Ross and Phoebe. However, she would be proud to know that she made up as best she could for Ross.

Hate: Toned Herself Down

The Phoebe of the finale season was surely much more traditional than the Phoebe of the early days of the series. Some fans might see it as a character growing up with time, but some might also feel like betraying her own unique self in the process. And, Phoebe of season one would have been the first one who would have hated it. She would be shocked to see this normal life with being married and having a steady job and a fairly ‘normal’ wardrobe.