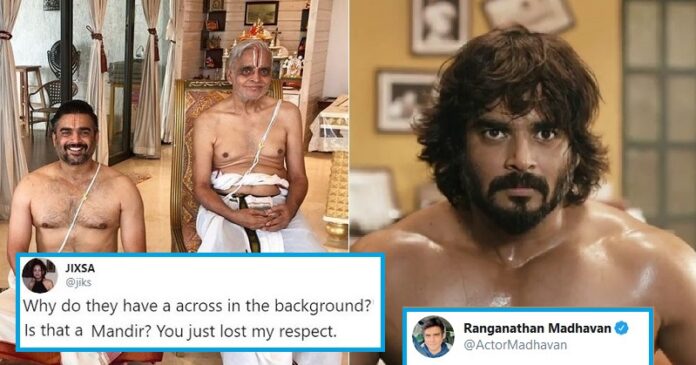 India is an ardent follower of unity in diversity. Our constitution has given everyone the complete right to follow the religion they like. They even can be an atheist if they don’t or don’t want to believe in any supreme power of God. However, there are some people who either try to force their religion or their conservative thinking onto others. They also try to shun those people who do not believe in their beliefs. And this time, Rocketry actor R Madhavan was their target.

R Madhavan had posted a lovely picture on August 15 last year. In the picture, he was celebrating Raksha Bandhan and Avani Avittam along with his father and son Vedaant. As we all know, both Raksha Bandhan and Avani Avittam are Hindu festivals. In a weird turn of events, a troll spotted a “cross” in the background and trolled him for keeping a “cross” at home. The troller focused on it and question Madhavan’s faith.

Indeed, the picture is looking beautiful as the three generations can be seen celebrating the festival with joy. However, one of his followers, in spite of seeing this beautiful trio, noticed a “cross” in the background and wrote,

“Why do they have across in the background? Is that a Mandir? You just lost my respect. Do you find Hindu Gods in Christian churches? All this is fake drama you did today.”

To this troller, Madhavan gave a savage reply in Maddy style from his movie “Rehnaa Hai Terre Dil Mein” and with a long note, he did shut down the troll. He wrote,

“I really don’t worry about respect from the likes of you. I hope you get well soon. Surprised that in u r sickness you did not see the Golden temple pic there too and asked if I converted to Sikhism.”

He also emphasized that he respects all religion and wrote further,

“I have the blessing from the Dargas there too and blessing from all religious places around the world. Some gifted and some bought. My home is home to staff from all faiths and we pray at a common altar. Like any defense personal will tell you, happens in every unit. I have been taught from my very childhood to maintain my identity with pride but at the same time RESPECT each and every faith, belief, and region. ‘Yemmadhamum Sammadham’ (I respect each religion as my own). I hope my son follows that too.”

The actor did not end it here and further added,

“I have prayed at every Darga, Gurudwara, and Church. I have had the good fortune to visit when a temple was not around. They have shown me utmost love and respect knowing that I am a Hindu. How can I not reciprocate that? All I have is a lot of love and respect to give as my vast travels and experience have proved, is the only true faith. Peace and love to you too.”

This was the perfect reply to the troller to give him some perspective and shut him out. After Madhavan’s reply, Amit Sadh, the actor was one of them who applauded him.