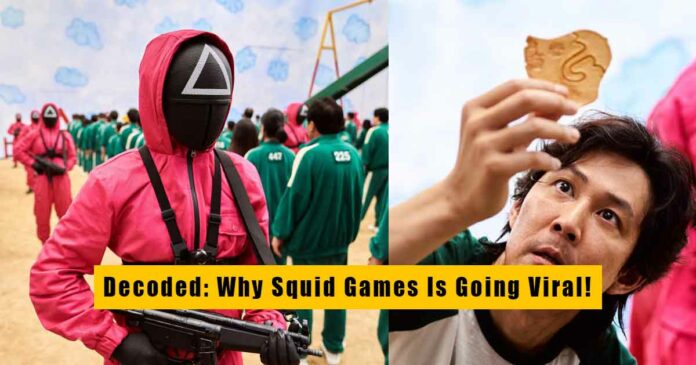 The Squid Games series launched on Friday, September 17th. This show follows competitors. As they compete for large sums of money, but their lives are on the line behind the scenes. Despite the fact that Squid Games isn’t the first survival program on television. Something about it has piqued everyone’s interest. The nine-episode Korean series has become the internet’s new favourite.

But if you have a low tolerance for gore and violence, you may want to avoid it. There are a few reasons that we’ve highlighted and we believe these are the things that are making the world watch Squid games. Don’t worry, there won’t be any spoilers for you in here.

Here’s the list of 10 reasons why the world is obsessing over Squid Games on Netflix:

Each character in Squid Games has a rich past. These are people who have got pushed to the margins of society in some way. They come from a variety of backgrounds. A jobless man with a gambling problem. He is fighting for respect from his family. While a little girl is doing everything she can to get her mother back from North Korea.

Every player has a reason to put their life on the line in the game, which gives us a reason to root for them. The show’s characters, according to many, are to blame for the show’s worldwide success. Also, one of the reasons you should watch Squid Games.

Squid Games web series delivers a brilliant concept. Despite the show’s not so new genre, it has elements that were never explored before. A group of 456 people who are in debt gets lured into a deadly survival game. In this, the winner would receive 45.6 billion Korean ($39 million). But, the program isn’t only about surviving.

Squid Games delves at topics like socio-economic imbalance, desperation, exploitation, and the degradation of humanity’s moral fiber, and more.

The Squid Games web series direction is completely insane. That is what keeps the audience interested in the show. The show got planned as a movie first, but it was later changed to a series to better suit its purpose. People are now addicted to the show. Some find it relatable, despite the fact that it is set in a country that is not their own.

Kim Pyeong-gang, a professor of global cultural material at Sangmyung University, believes there is a legitimate rationale for the viewers’ affinity for Squid Games. “People, particularly the younger generation, who suffer from alienation. And hostility in real life, seem to identify with the characters,” Kim told the BBC.

Squid Games web series on Netflix should be next on your list of shows to watch if you appreciate thrillers. The entire challenge is based on childhood games. It becomes ugly once the stakes get revealed. Because the game only has one winner. One will die if one does not follow the rules. If you do not finish the game in the allotted time, then you may even get slain in your sleep by other participants. The thrill of not knowing what’s going to happen next keeps you glued to your television until the very last episode.

The games produce the show’s most thrilling and suspenseful episodes. But it is the completely sketched characters and, of course, the outstanding performances that bring them to life and have made Squid Games such a hit. Then there’s Lee Jung-portrayal as Gi-hun, the bumbling but good-hearted protagonist.

In the show, Park Hae-soo acts as Gi-Hun’s ambiguous childhood friend, Sang-woo. While Kim Joo-young is a wonderfully unhinged fraudster who agrees with a mafia inside the games. All these backstories and characters lead to turmoil among the contestants. Later on, after facing disagreements among themselves, you will see the conflict among the players is exceptional too.

The show begins, with the participants being real people. Rather than animated characters that may get killed in a typical violent video game., the 456 people and employees congregate during times that are quite appealing to the eye. Don’t get fooled by the soft colours! It grows dark as people begin to die one by one. Expect a continual conveyor train of blood-soaked murders.

You will see a lot of body horror from the first episode onwards. Stabbings, shootings, and an especially stomach-churning sequence involving organ harvesting are all possible here. The emotional cruelties and betrayals inflicted on each other by the participants. All this contributes to the most horrific parts of the series, as anyone who has seen the episode with the marble game can attest.

Who handles all these big video games? Have you meticulously planned everything? Who’s responsible for gathering all the information of the contestants? Who keeps a close watch on things and keeps track of what’s going on? Is this all correct? We’ll have to see what happens! In this dark, ugly, competitive society ruled by money, one must live and choose to be a good person at heart. But, not everyone has the option to do so, given all capitalism’s implications. Amidst all these mysteries you will keep on watching the series to see what happens at the end.

Squid Games web series on Netflix has become a worldwide sensation. Not only for its high-octane action but also for the universal themes, it addresses. In particular, it’s an implicit critique of capitalism and a study of class fears. Everyone on the island is elected to be there, unlike in previous dystopian thrillers featuring battle-to-the-death competitions. Despite seeing the games’ atrocities, a bulk of participants return in desperation because they are overwhelmed by the bleak prospect of living under massive debt.

Gong Yoo (Goblin, Train to Busan) made a special appearance on the show. If you don’t like the way this handsome mystery man looks, you’ll be stunned.

10. The Memes That Went Viral

Of course, having some social media traction helps a new Netflix show spread like wildfire. The bleak events of Squid Games have proven to be wonderful meme material. With fans injecting anarchic joy into the series’ most distressing moments, they have copied recordings of the doll dancing to everything. With so many people talking about the show online, it has only helped gain more viewers who watch it with the curiosity to know why others are talking about it. So, now do you wanna watch it too?