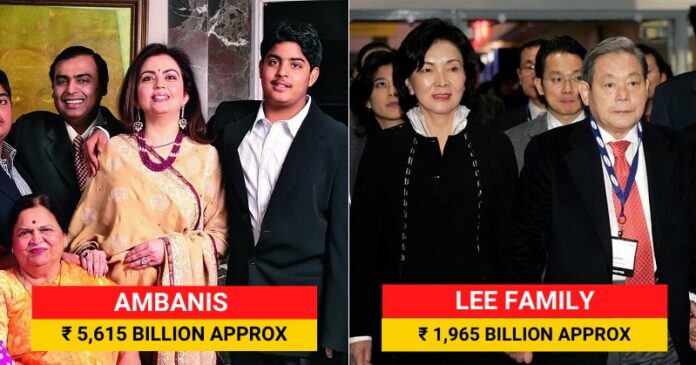 There are few multi-million dollar company owners who are quite fortunate in terms of money. They have started from scratch but now dealing in millions. Here is the list of the 15 richest families in Asia that will blow your mind. Scroll down to check it out:

Company: Charoen Pokphand Group
Wealth: $31.7 Billion (₹23,42,93,11,50,000 approx)
Chia Ek Chor moved to Thailand in 1921 and started selling vegetables with his brothers. After almost a century later, Dhanin Chearavanont, his son, became a senior chairman of Charoen Pokphand Group. It is a conglomerate with food, retail, and telecom units.

Company: Djarum, Bank Central Asia
Wealth: $31.3 Billion (₹23,12,61,61,50,000 approx)
In the 1950s, Oei Wie Gwan bought a cigarette brand and renamed it Djarum. Ever since then, the company has become one of the largest cigarette makers in Indonesia. In 1963, after his death, Michael and Budi, his sons invested in Bank Central Asia.

Company: Samsung
Wealth: $26.6 Billion (₹19,65,89,96,00,000 approx)
Lee Byung-Chull started Samsung as a trading company in 1938 to export fish, fruits, and vegetables. He got into the electronics business in 1969 and set up Samsung electronics. It is now the world’s largest maker of memory chips and smartphones. After his death, his third son, Lee Kun-hee took over the business. However, due to the heart attack, he also died in 2020. Now, Kun-hee’s eldest son, Lee Jae-Yong has now stepped in to lead the company.

Company: Hinduja Group
Wealth: $15.1 Billion (₹11,15,86,73,50,000 approx)
In 1914, Parmanand Hinduja established his business in trade and banking. Srichand Hinduja joined the family business in 1952. Later, the Hinduja Group was led by four brothers in several businesses such as health care, finance, automotive, and energy. The family now owns real estate in India as well as many other cities.

7. Sy Family From The Philippines

Company: SM Investments
Wealth: $19.7 Billion (₹14,55,40,64,50,000 approx)
Henry Sy, originally from China immigrated to the Philippines. He helped his father at that time by selling soap, sardines, and rice. He opened his first shoe store in 1958. The company has grown into a conglomerate with interests from a small shoe shop. Currently, the group has more than 2,000 banking branches and runs almost 2,800 retail stores.

Company: Shapoorji Pallonji Group
Wealth: $22 Billion (₹16,25,32,70,00,000 approx)
Pallonji Mistry’s grandfather started a construction enterprise in 1985 with an Englishman. After that, the Mistry family business grew. Now, they have many interests including construction and engineering. In fact, the group has built some of Mumbai’s landmarks.

Company: TCP Group
Wealth: $24.2 Billion (₹17,88,10,17,00,000 approx)
T.C. Pharmaceuticals was originally established by Chaleo Yoovidhya in 1956. Later, it branched out into selling consumer goods. The company invented an energy drink in 1975 called Krating Daeng aka Red Bull. Later, an Australian businessman came across this drink and collaborated with Chaleo to modify the recipe. Yoovidhya has made a fortune with this drink. After Chaleo’s death in 2012, his son, Saravoot Yoovidhya has now become TCP Group’s chief executive officer.

Company: Suntory
Wealth: $16.3 Billion (₹12,04,38,25,50,000 approx)
Shinjiro Torii was the founder of Suntory. In 1899, he opened his first store of wine and Western-style liquors. After his son took charge of the company as the President in 1961, the company expanded into a multi-billion dollar conglomerate with interests from various health foods to alcoholic beverages.

Company: Far East Organization
Wealth: $13.8 Billion (₹10,19,66,13,00,000 approx)
Ng Teng Fong worked at his parents’ soy sauce factory as a bicycle repairman. However, he ventured into property development instead of entering into the family business. In 1960, he set up Far East Organization. He also managed to build his business in Hong Kong.

Company: SJM
Wealth: $14.6 Billion (₹10,78,77,21,00,000 approx)
In 1962, Stanley Ho with his business partners got the license to set up the first casino in Macau. Currently, the Ho family has SJM Holdings which owns multiple casinos and hotels. His has been divided between his fourth wife Angela Leong, his daughter Pansy Ho, and his son Lawrence Ho.

Company: Hong Leong Group
Wealth: $16.5 Billion (₹12,19,16,02,50,000 approx)
Kwek Hong Png set up Hong Leong Co. in 1941 with the help of his three brothers. The corporation deals in various sectors such as property development, finance, hospitality, etc. Now, Kwek Hong’s nephew has taken over one of the largest conglomerates in Singapore.