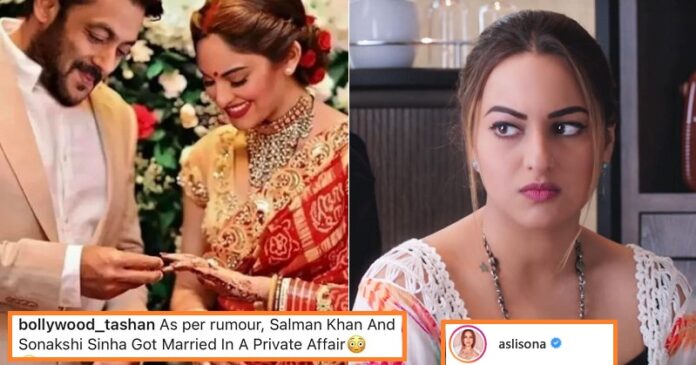 Recently a picture showing superstar Salman Khan and Sonakshi Sinha went viral which appeared to be a secret wedding photo. The picture broke the internet and people started speculating things and jumped to all sorts of conclusions. Some started guessing whether the wedding took place in Dubai or Mumbai, others called out the picture as photoshopped.

In the picture, Salman is wearing a beige blazer over a white shirt and Sonakshi is looking stunning in a red saree and a bridal Chura with vermillion in her hair. The photo shows Salman putting a ring on Sonakshi’s finger.

Sonakshi Sinha made her Bollywood debut in 2010 with Salman Khan in ‘Dabangg’  and she has also been part of his Da-Bangg Tour in the UAE with Salman. According to a post, shared on the subreddit Bolly Blinds n Gossip, Sonakshi commented on one such post. They posted a screenshot of the original picture with Sonakshi’s comment on it. Here is what Sonakshi commented, “Are you so dumb that you can’t tell the difference between a real and a morphed picture?” followed by three laughing emojis.

The actress called it plain dumb and was amused by the fact that some people couldn’t even tell the difference that it is real or photoshopped. Though the picture was fake and photoshopped it still got circulated.

Salman Khan has been spotted with his rumoured girlfriend Iulia Vantur on various occasions, though he has never confirmed it officially. There were also rumours that Salman Khan secretly tied the knot with Iulia Vantur back in 2016 to which Salman reacted by saying:

“These are just rumours as you said yourself. If I had got engaged or was getting married, I wouldn’t wait for the news to leak out. I would announce it myself, it would be a proud moment for me,” he told the Mumbai Mirror.

Meanwhile, Sonakshi Sinha is rumoured to be dating Zaheer Iqbal. Both started their careers with Salman Khan projects.

The actress will next be seen in ‘Double XL’ Huma Qureshi as her co-star and ‘Kakuda’ with also features Saqib Saleem, and Riteish Deshmukh.

On the other hand, Salman Khan will be next seen in ‘Tiger 3’ with Katrina Kaif and Emraan Hashmi. He also has ‘Kabhi Eid Kabhi Diwali’ co-starring Pooja Hegde, and ‘Kick 2’ with Jacqueline Fernandez up in the pipeline.

Many netizens said the fake picture was ridiculous and embarrassing. One said, “This photo looks like Race 3 CG level and some people still believe this is true.”

Another added, “It’s beyond embarrassing at this point; heights of ridiculous.”