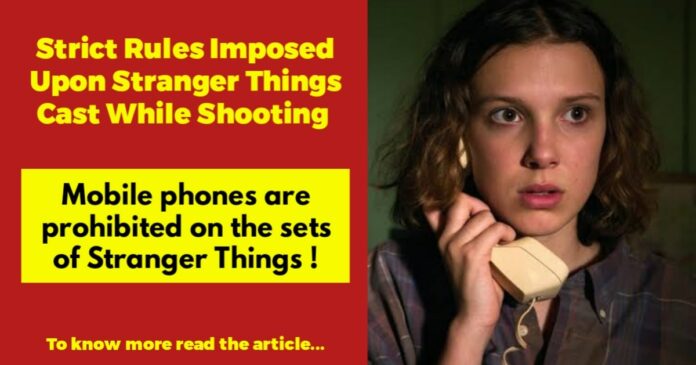 We’re so thankful to the Duffer Brothers. They brought us the vintage flavour of the ’80s mixed with a rollercoaster ride of adventure, danger, monsters and undying friendship. If you still couldn’t guess, we are talking about the famous Netflix web series Stranger Things that garnered quite a reputation amongst its viewers and critics alike. We absolutely loved the acting as well as the superb plot. But do you know, the cast was asked to adhere to some strict rules while they were filming or present in the sets? Let us see what they were.

If you have watched the show, you know the backdrop of the series was that of America in the ’80s. But Jonathan Buyers, Will’s big brother, played by Charlie Heaton, is originally a British. So he was compelled to change his pronunciation completely so that whenever he spoke, there was no trace of any British accent. 50 shots were taken just for him to say the name ” Nancy ” in an American accent. All we have to say is, Jon, you’ve done an excellent job.

Mobile Phones Prohibited On The Sets

Taking into consideration the period of the show, it is evident that the people in the 80’s were not so keen on mobile phone usage. But these kids belong to the generation of cellphones, and without it, we know how we feel.

So to make it more realistic, the actors were not allowed to use their cellphones in the set premises. Apart from the shoot, the cast would go home so exhausted, that they barely touched phones.

Stay Prepared To Lose Your Voice

No doubt there is a lot of screaming in all the 3 seasons, especially by the kid with superpowers, Eleven aka Millie Bobby Brown, whenever she happens to use them. The ear-splitting scream had even caused Millie to lose her voice five times during the scheduled 8 months of shooting. Hats off to such dedication!

No Haircut Other Than The Show

Yes, you read that right. The kids were not allowed to sport haircuts other than the one they are seen in the series. This particular rule was specially applied to Steve Harrington, played by Joe Kerry. He was shown to be obsessed with his thick, silky hair. Luckily, during his audition he came with full, overgrown hair and the Duffer brothers decided to keep it like that throughout the show. Well, turns out it was the best decision.

The cast was seen wearing clothes of the ’80s, not only in the series but also at their homes. Since the men in the 80’s wore really tight jeans, the cast was asked to wear them frequently so that they would be comfortable while shooting. Nevertheless, you can’t help but accept that the 80’s fashion was quite quirky.

No Additional Makeup Allowed While Coming To The Sets

This was specially added to the list of imposed rules mainly because of Millie Bobby Brown who once appeared on the sets smeared with glitter. It took the makeup artists, 45 minutes extra to remove the glitter from her face; as a result, delaying their shoot.

Too Much Muscularity Not Allowed

The show depicts the time of the ’80s. Considering the plot, characters needed to look skinny or chubby as apparently the people at that time never went to the gym. Thus, to fit the role of Billy, Dacre Montgomery had to put on a few kilos by changing his diet. Needless to say, he worked really hard.

Did you ever notice that Eleven’s behaviour and her interaction with the kids were almost like an extraterrestrial? Well, Eleven aka Millie with superhuman powers was asked to mirror the alien from the film E.T. Interesting right?

We are personally very fond of this regulation. No one should be allowed to hurl slang at each other, whether on the sets or any other workplace in the world. The Stranger Things cast too strictly instructed not to use any offensive words to any of their co-stars or other people on the set. Respect!

Plot Should Not Be Revealed Under Any Circumstance

Netflix took the precautionary measures a level higher by preparing sheets for the actors to guide them in interviews. They taught them what they should and shouldn’t speak about in interviews. They were also instructed on how much they should reveal to prevent leaking of show clips. They were cautious, even warning the actors not to post anything in the social media that might spill any unwanted information. Well, we’re not really surprised upon seeing the surge of the fanbase.

Well, it seems that the hard work of the cast had really paid off. Stranger Things TRP rate is quite high, not only in America but also overseas. We are eagerly waiting for the next season after the suspense ending in Season 3. I would recommend you not to miss this amazing show if you haven’t watched it already.