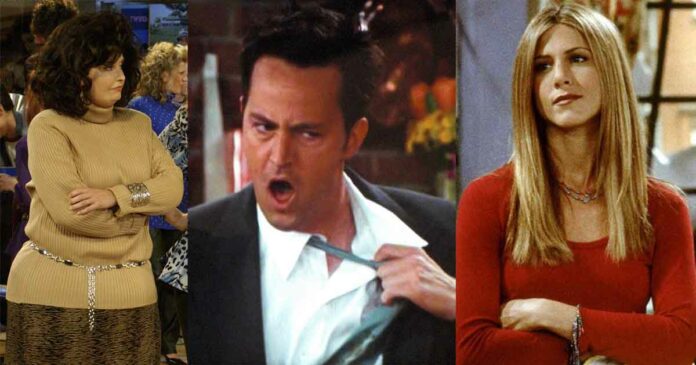 You probably have grown up binge-watching friends or if you’re a millennial then you have started watching it on Netflix or rewatching it probably. Not sure if you have noticed it or not. But there are a lot of things that are problematic in the series. Maybe they are indicative of the times or the authors’ lack of consciousness, but a lot of elements from the Friends TV Series like the storylines, situations, and characters were problematic.

While Ross and Monica Geller along with Rachel Green, Chandler Bing, Joey Tribbiani, and Phoebe Buffay are people in their 20s during the 90s, but in 2020 you may find it difficult to agree with some of their views and actions. The lack of diversity is inexcusable and embarrassing during its ten seasons. Even those jokes that deliver racial puns or make fun of personal life choices are all demeaning. It is true that many of the jokes in the show, which started almost 26 years ago, would probably be thrown out before they even entered the writer’s room.

Friends were recently added to Netflix in the UK, and the problem elements, which lasted ten seasons, surprised thousands of years. Below are highlights of the troublesome themes, moments, and jokes that have taken place over the ten years of the show.

#1 Almost everything about “Fat Monica.”

“Fat Monica” fed a perpetuated image of overweight individuals as punchlines and nothing more into the entire media. She only became a “worthy” character after she lost her weight, or at least that’s how the show made her appear.

In a way, the show also implies that when she is bigger she is a solitary loser. Every time I watch it, I get so mad.

Most of Joey’s scenes around women are problematic. It really bothers almost everyone when Joey treats the women badly after sleeping with them. Sure, he’s got his good and sweet moments, but it’s super problematic that he can’t even remember some of the women he’s been sleeping with. Also, the way he broke up was drastic. Instead of standing up and facing things on his own, he expects his roommates to make breakfast for the girls, and then dump them for him.

I love Joey, but his roommate’s search was awful too: “Female, non-smoker, non-ugly.” And his word association test was also incredibly gender-biased. Joey immediately rejected people if they weren’t as obsessed with s*x as he was.

We all remember the night when Ross saw Rachel walk without clothes all around the house. He immediately assumed that she was in a mood to have some naughty moments with him. The two had no communication, but because Ross thought he was “The Man”, he saw it as an opportunity or a plea for one night fun.

#4 The relationship between Monica and Richard.

Monica was sleeping with her dad’s friend. I mean, I know he’s Tom Selleck, irresistible, but this guy knew Monica as a kid and may have held her in his arms while she was small, and now they were in the bed together! It’s was so creepy.

The fact that Ross was the only one who thought Monica and Richard was a strange thing was not well taken in. It was like, come on, he’s probably babysitting her like a newborn.

#5 And, finally, Ross was annoyed by Ben playing “girly” toys.

I love the show to death. But the episode in which Ben was playing with a doll and Ross was so upset, bugged me so much. Let the kid play and be a kid without your fragile masculinity ruining his pleasure. Didn’t Ross understand this simple concept!

#6 The treatment of Chandler’s dad throughout the show.

While adding a character from the much-neglected community of the time, was a big step forward on television. But the community was completely misrepresented it feels.

Chandler was horrific about his parent’s choices and made jokes too. At least by the end of the show, he could have been more sympathetic and acceptable.

#7 The continuous examples of fragile manhood.

To make a show they had often played the old and dangerous norms of what a man’s character should be. And if it doesn’t meet those set standards then they stated it wrong for manhood! So basically, they often made the fragile masculinity into a big issue. And it never helps because society doesn’t work that way. We need acceptance towards different people who might not be the same.

A classic example- Season 6 Episode 8, Monica has Chandler make cedar sachets with an old pantyhose while they are living together. After that, He found Joy learning to knit and Ross using face powder to try and minimize the contrast between his face and excessively white teeth. The scene ends with Chandler screaming, “Where are all the men!”

Well, it was intended for humor but it’s national television, what you show is what you teach the teens. Characterizing actions as male and female isn’t right because in the real world, things are different and we need to mare acceptable.

#8 Rachel’s sacrifice of her dreamwork for Ross.

Rachel had this magnificent arc for ten years as it grew from spoiled rich brat to a self-realized, independent woman with a great career. She then sacrificed the career for Ross at the last moment. In the canon of my head, Rachel never went off the aircraft and became LVMH’s CEO.

#9 Ross and Mark, where Rachel lost a lot.

Ross behaved like a psychotic when Mark came into their life. He was resentful, jealous, and totally possessive. More than once, he stumbled in her work, shouted in her office, and sent excessive donations(gifts, as acknowledged by Ross) to her. At that point, he could have also marked “ROSS” on Rachel just like she was some cattle.

He assumed Rachel was more concerned with a guy than with her current career and relationship, and all this was so disheartening and naive.

#10 And their’s harassment too.

Rachel once asked Ross to assist her. She’s on the verge of transforming into a different dress and asks Ross to turn around because she doesn’t want him to see her changing clothes. Ross doesn’t rotate and said he has seen her like that many times.

Rachel explains that it was different now. After which, Ross tells her that she too can see him that way– he could have just closed his eyes, but no. He then “imagines her without clothes” several times, and even watching the scene makes me feel extremely uncomfortable.

Imagine your ex-boyfriend telling you that! Wouldn’t it be so inappropriate? Another reason to hate Ross!