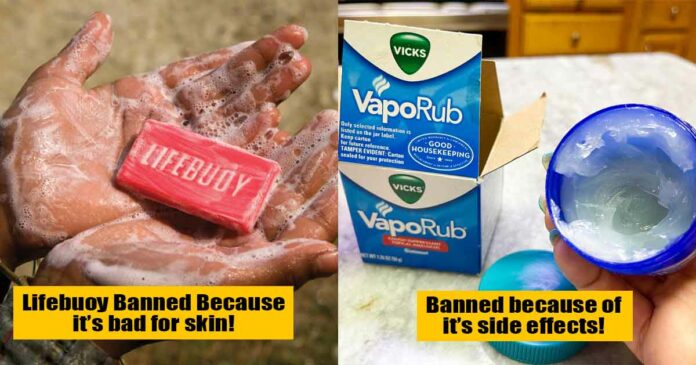 Different everyday things are used in different countries according to their uses. Something that might not even be useful in one country, can be a necessity for another one. That’s how the concept of demand comes in place. Around the world, there are plenty of different standards that are followed in different countries such as the food we eat or products we use. For different countries, there are different declaration boards that define what standards will give them standard accreditation. While some won’t accept even medium ranged stuff, some country might have it at the minimal. Every product are either rejected or if they have good market penetration, banned, if something isn’t up to the standards according to the boards or the country.

India is considered to be an expert in banning stuff. However, there are plenty of stuffs that are used in India but are banned by many developed countries. Below are some of the everyday products that is banned by other countries, except India. Let’s take a look:

The sale of Jelly Sweets is completely banned in America, Canada, and Australia. These sweets are widely eaten by children and reportedly, they are considered harmful for the health of children. There have been several cases about the threat of choking in children due to Jelly Sweets. However, children in India have easy access to these.

Lifebuoy is one of the highest-selling soaps in India. On a daily basis, we see many advertisements promoting the brand. However, the soap has been banned in many foreign countries because it is considered bad for the skin, be it humans or animals. The soap is readily available in India and used by humans for bathing purposes.

More than 60 harmful pesticides such as Endosulfan, DDT, and many more have been banned abroad. Reportedly, these pesticides cause deadly diseases after entering to our bodies through plants. That is why they are banned in many abroad countries. However, in India they are being sold openly.

Red Bull is a very popular energy drink in India and also it is treated like a status symbol. However, the drink is totally banned for those under 18 years of age in Denmark, France, and Lithuania. In a research, it is disclosed that it is prohibited for the hypertension, depression, and heart.

We quickly pop a Disprin when we have a headache because it is commonly available. However, it failed to meet international standards and that is why it has been banned in America and European countries. But, you can easy pop a Disprin in your mouth in India.

Since it contains dangerous microbes and germs which can cause serious side effects, the use of unpasteurized milk in the USA and Canada is prohibited. However, in India it’s easily available in the market.

Nimulid is a pain killer that is officially prohibited in the USA, Australia, Canada and Britain. Due to the serious threat it possessed to the body liver, it is banned in these countries. However, it is easily available and used in India.

In India, an Alto car is no less than a dream for middle class families. However, in many countries, Maruti Suzuki Alto 800 is banned for failing to pass the Global NCAP crash test. However, it is quite popular in India.

After being said that it is harmful for the kidneys, cold medicine D-Cold Total has been banned in many countries. However, it is easily avaiable and widely used in India. You must have seen the advertisement of this product while watching TV.

Thanks to to Jihadist te**orist group Al-Shabaab, Samosa is legally prohibited in Somalia. By asserting that the food was probably “too Christian”, these samosas haters applied the ban in their control. However, they are widely enjoyed by the Indians from all around the corner of India.

Just like Maruti Suzuki Alto 800, Tata Nano failed to stand up to the independent crash test organized by Global NCAP as well. It implies that the person boarding the car will be at risk. Even though it is legally prohibited in other countries, this car is quite popular in India.

Kinder Joy has been described as dangerous for children’s health in the U.S. and that is why it is banned there. However, in India it’s favourite for kids. You could be fined up to $2,500 per illegal Kinder egg if you take this with you in the U.S.

Vicks Vaporub is quite popular in India to get instant relief from cough, cold, and congestion. However, it is banned in many European and North American countries. Reportedly, an ingredient found in Vicks Vaporub can cause dangerous side effects. However, it is not banned in India, irrespective of all these harmful effects.

Maybe you won’t believe this but chewing gum is actually banned in Singapore. To keep public places clean, the government had banned the import or sale of gum in the country. But, you can chew it in India without caring about the cleanliness of the environment.