We all love FRIENDS, but while watching the show, we might have felt it already that some of the jokes aren’t appropriate for today. The show was written back in 1994, and the script evidently gives us the vibes. The viewers and society as a whole have evolved a lot since 1994. We are now more informed and more aware than ever before. Our lifestyle has changed a lot since then and that has forced us to see things differently.

FRIENDS is adding new viewers every day, but that doesn’t mean they are modern in everything they did. Though we laugh hard at the jokes, still some of them might feel offensive at times in today’s world. Here we have listed a few jokes that viewers would not have excused if the show comes out today. The writers got through without any problems because back then the viewers had a different mindset. Today the show has fans, but critics too can’t stay behind. So let’s have a look at some jokes from FRIENDS that would not have stood a chance in today’s world. In fact, these humorous scenes, gags or jokes would be considered too touchy, offensive or just out of place in today’s world.

#1 One Where Joey And Chandler Can’t Handle Breastfeeding

This episode in Friends aired in 1995 and clearly, the social dialogue about breastfeeding was not as advanced to where it is today. In the scene, we noticed Joey and Chandler making a great deal about Carol feeding the baby just beside them on the couch. They were visibly not ok with the moment and did not have the maturity to handle it well.

For ages, women had to cover themselves and breastfeed in private but that’s no longer the case. Today we know and recognize that forcing ladies to cover up while feeding is definitely not ok. So the reaction by Joey and Chandler would have been too exaggerated if it was shot in today’s world.

Adding a plot to show alcoholism seemed indeed progressive when the writers added it in season 2 in the ’90s. But if shot in today’s environment, the scenes would have been totally different.

We saw Monica dating a guy whom the gang called Fun Bobby, but they soon realized that he is fun only when he is drinking heavily. He later is seen to be ridiculously dull after he tries to be sober. To stay with him, Monica takes up drinking but she eventually gets dumped because of the newly developed habit. The storyline kind of mocked the alcoholism when people were shown to leave them or laugh at the people suffering from such problems. The worse came in when the gang instead of supporting, mocked Booby while he was trying to leave behind his habits.

#3 Ross Being Possessive And Jealous

While watching and rewatching the show, many fans might have felt that Ross often disrespected women with his jealousy and possessive nature. Ross is a nice guy but his beliefs and expectations were too high from his partner and sometimes you can’t deny that it is not at all charming.

He is often seen trying to ruin her relationships and prey on her while she is emotionally vulnerable. He is often possessive and extremely jealous in all his relationships. Even his first break up with Rachel was because of his jealousy. So you can think for yourself will it be normal to see anyone so possessive in a show today?

#4 One Where Monica’s Character Was Questioned

In the first episode, we saw Monica sleeping with a guy on her first date night. The creators had a great doubt about whether people would like it or not. She was once confronted by Richard to reveal the number of guys she has been with. Though not loud, Richard was quite concerned about the numbers and might have acted weird if it was too high. Somehow it signaled that Monica as a girl needs to keep a check on the numbers.

However, the show featured Joey as a guy who had uncountable affairs and often forgot the names of the girls after sleeping with them. But no one seemed to give a thought to it. Wasn’t that injustice girls?

#5 One Where Phoebe Was Assaulted By Paolo

Paolo came in unexpectedly in everyone’s life and everything was going fine until Phoebe had a weird encounter while giving him a massage. But the way it was shown wasn’t real enough for today’s world. Phoebe disclosed the incident to the group by saying, “He made a move on me.” While we could clearly figure out how the turn of events was and needed more attention because Paolo was assaulting Phoebe at her workplace.

Hopefully, today’s generation understands the depth of such incidents and it would not have been treated so lightly. Since the show came out in the 1990s so the creators got a green flag else in today’s world it would not have received some serious backlash.

We can’t ignore the fact that FRIENDS was way too ahead of time to have included the couple in their storyline. But the jokes played on them on occasions were not too funny. Even Ross had to face the heat from his friends because his wife left him for another woman. The jokes went way too much because it gave us the feeling that Ross would have been better off if Carol would have left him for any other reason.

In today’s world where we are so progressive and acceptable to modern society, the dialogues and scenes from the show would have been problematic.

#7 One Where Ross Won’t Let Ben Play With Dolls

The guys in Friends seemed to have some problems with their masculinity but none is so obvious about it as Ross. When his son Ben was a toddler and chose Barbie as his favorite toy, Ross couldn’t get over it. He tried everything in his power to ensure that Ben takes in some masculine toy rather than Barbie.

Also, in a later scene, we saw Ross refusing to hire a male Nanny for Emma because he is male. He even asks for his partner’s preferences just because he was doing the job of a nanny. And such behavior is definitely not ok in today’s world. The scene looked awkward already but if you watch it now it looks insulting as well.

#8 One With All The Homophobia 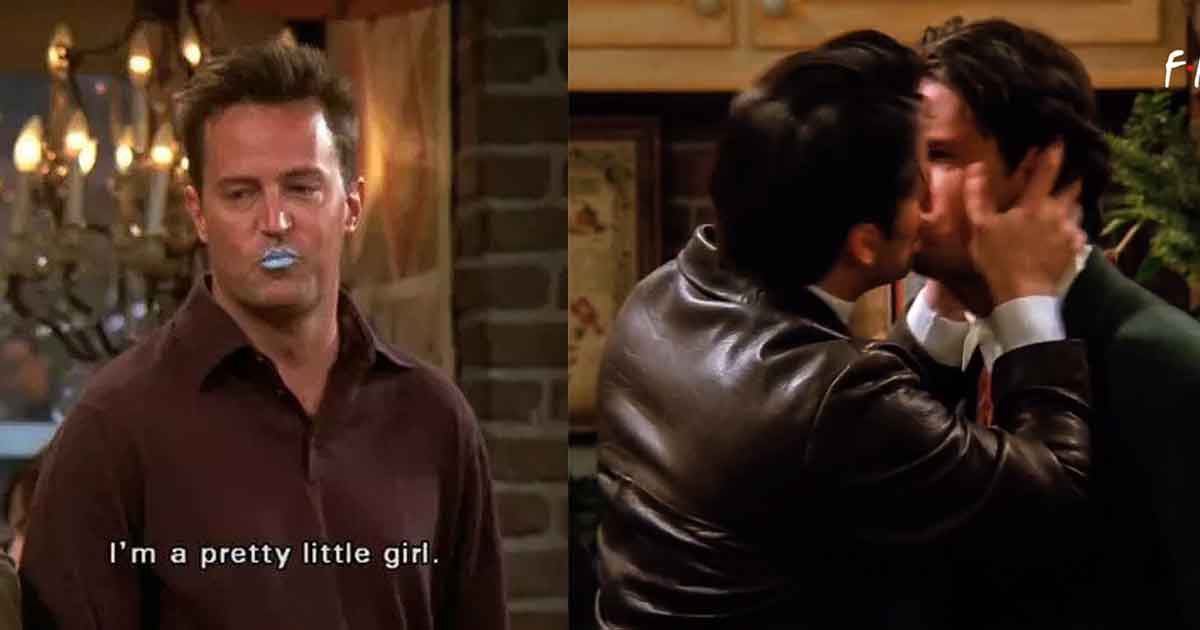 FRIENDS is about friendship and the guys are not shy to show their affection for each other except for the time when they decide the hug is going too long or have an emotional moment. But at many moments the guys were ridiculed or shamed for doing something that is not traditionally masculine. Example: holding a bag or wearing a bracelet.

If the show was made today then no one would waste time acting like their bromances were insignificant.

#9 The One With All The Fat Shaming

The modern audience goes totally paranoid when it comes to jokes on Monica’s treatment when she was fat. We saw many moments when Monica had to bear comments because of her weight. She was reduced to a moment where she planned to lose weight and give in to the social standards of beauty.

In today’s world, we can never accept such jokes because they are simply not appropriate. Just because the show was created back in time, the scenes are continuing.

#10 One Where Everyone Was Transphobic

There are a lot of storylines in FRIENDS that people are wild upon now that they have a little perspective. But none is more offensive than the one involving Chandler’s biological father. He was a transgender woman in the show and her gender identity is mislabeled and turned into a punchline time and time again.

In the show, Chandler treats his dad like an embarrassment and makes no effort to accept the life she has chosen to live. Now that we have come such a long way where Trans rights are more supportive than the time when Friends was on the air, it makes the scenes very difficult to watch.

So do you agree with the jokes mentioned? Are they not inappropriate for the world that we are living in? In case, if you come across any other joke that you think is not for today’s audience then please mention them in the comments and let everyone know.

We know there are flaws in the show but we are not blaming anyone here. The show came up in 1995 and is brilliant considering the time back then. In fact, it was quite progressive and ahead of its time. We love the show and would watch it again and again for the entire lifetime.