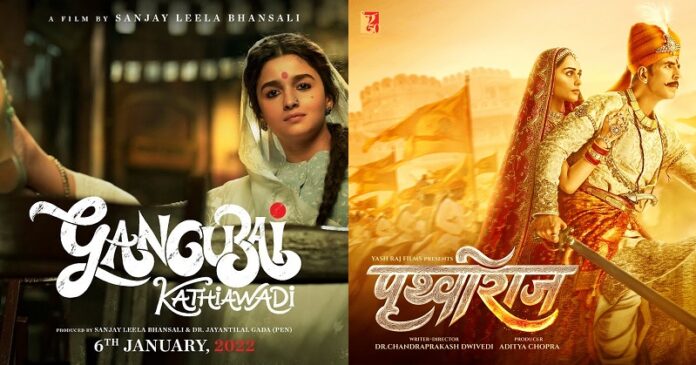 Bollywood has always been about drama. From “Chachi 420” to “Hungama”, we have all the Bollywood movies no matter what genre it was. However, down the line, Bollywood also started to make motivational movies that can inspire people and give the audience to something think about. Well, 2022 is going to be the perfect amalgamation of both kinds of movies.

If you are a fan of Bollywood films and searching for the best upcoming Bollywood movies 2022, then this article is perfect for you. Let’s dig into the list:

“Radhe Shyam” is one of the upcoming Bollywood movies in 2022 that features Prabhas and Pooja Hegde in the lead role. It is a period-romantic drama set in Europe during the 1970s. To woo the audience, this film is shot in Telugu and Hindi simultaneously.

As the name suggests, “Prithviraj” is a historical action drama based on the life of a Hindu King, Prithviraj Chauhan. The lead characters are played by none other than Akshay Kumar and Manushi Chillar. This is one of the upcoming Bollywood movies that was set to release on 21st January 2022. But, with the increase in the new virus strain, Omicron, the film has been postponed.

“Gehraiyaan” is a romantic drama film that features Anaya Pandey, Dhairya Karwa, Deepika Padukone, and Siddhant Chaturvedi in the lead roles. This amazing Bollywood film is all set to release on 11th February 2022 on Amazon Prime.

“Gangubai Khatiawadi” is a biographical crime drama that is based on the book “Mafia Queens of Mumbai”. This movie revolves around the life of a young Ganga who quickly marks her own territory. Interestingly, she claimed as the madame of the red light area of Kamathipura. This upcoming Bollywood film of 2022 stars Alia Bhatt with pivotal roles by Vijay Raaz and Shantanu Maheshwari.

Featuring Ranveer Singh in the lead role, “Jayeshbhai Jordaar” is one of the social comedy Bollywood movies 2022. The movie revolves around a man who believes in the equality of men and women in society. Although the movie was all set to release on 25th February 2022, it got delayed because of the surge in Omicron cases.

“Bachchan Pandey” is yet another one of the upcoming Bollywood movies 2022 that features Akshay Kumar, Kriti Sanon, and Jacqueline Fernandez in the lead role. This film of 2022 is slated to release on March 4 and we are sure that just like other movies of Akshay Kumar, this movie is going to be a hit as well.

Featuring Ranbir Kapoor in the lead role, “Shamshera” is the Indian adaptation of Howard Pyle’s novel “Merry Adventures of Robin Hood”. This film is set in pre-Independence India featuring Vaani Kapoor and Sanjay Dutt as well in pivotal roles.

“Bhool Bhulaiya 2” is a standalone sequel to the 2007 iconic horror-comedy film “Bhool Bhulaiya”. This is one of the upcoming Bollywood films 2022 that features Kartik Aaryan, Tabu, and Kiara Advani in the lead roles. Since the last movie featuring Akshay Kumar was so hit, we are expecting it to be mind-blowing as well.

“Anek” is a thriller film by Ayushmann Khurrana that is all set to release on 31st March 2022. We can expect this movie to be a blockbuster movie with an interesting plotline considering Khurrana’s history of signing up for impressive projects.

One of the upcoming Bollywood films 2022, “Laal Singh Chaddha” is slated to release on April 14. This is an Aamir Khan productions film featuring Aamir Khan, Kareena Kapoor Khan, and Naga Chaitanya in the lead roles. If you don’t know, this film is a remake of the American film “Forrest Gump”.

Featuring Varun Dhawan, Neetu Kapoor, Anil Kapoor, and Kiara Advani in lead roles, “Jug Jugg Jeeyo” is a comedy-drama film that is set to release on June 24. Interestingly, you will also see YouTuber Prajakta Koli and anchor Manish Paul in this film.

Ranveer Singh is the perfect fit for a comedy film because of his quirky attitude. “Cirkus” is one such movie where he plays a double role for the first time in his career. Apart from him, there are many amazing actors in the movie such as Pooja Hegde, Jacqueline Fernandez, Sanjay Mishra, Varun Sharma, Johnny Lever, and more.

“Phone Bhoot” is a horror-comedy film that features Katrina Kaif, Siddhant Chaturvedi, and Ishaan Khatter in the lead roles. Alongside Ranveer Singh’s “Cirkus”, this film is releasing on July 15.

“Brahmāstra Part One: Shiva” is the first in a trilogy of films. It features Amitabh Bachchan, Mouni Roy, Ranbir Kapoor, Alia Bhatt, and Nagarjuna Akkineni in the lead roles. The film will screen in IMAX 3D and 3D on September 9.

“RRR” features renowned stars of Telugu cinema, N.T. Rama Rao Jr. and Ram Charan. Apart from that, Bollywood star, Alia Bhatt is going to be in the lead role. Scheduled to release on October 13, this upcoming Bollywood film of 2022 is a fictitious story that will surely be a blockbuster.