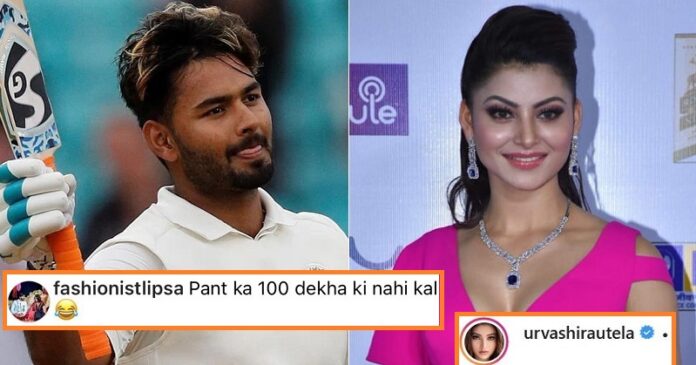 Some of the Bollywood divas have proved time and again that they don’t need any back support for themselves to carve out a niche. Their talents and personality are enough to show their worth in this magnificent Bollywood industry. And, one such bold and beautiful diva is Urvashi Rautela. Bollywood’s youngest superstar surely knows her way to charm her fans. Undoubtedly, she is one of the amazing Bollywood actresses who has made India proud with her great deeds as well as achievements. Apart from that, Urvashi is also known for her wit and quirky side. And, once again, she showed that she is a witty queen all over the internet.

A fan asked Urvashi if she watched cricketer Rishabh Pant’s century in the latest test series match between India versus South Africa. After receiving a comment stating, “Pant ka 100 dekha ki nahi kal”, she totally turned on her witty mode. And after that, she replied, “Oh you mean pant (using a pant emoji). Ya, I have seen that because everyone wears it. Also, Rs 100 I have seen inside it.”

Undoubtedly, Urvashi knows her way to get back all strong at trollers and slam them. If you don’t know, after being spotted on dinner dates, the duo had previously sparked dating rumors. However, as per the sources, they mutually parted ways soon after. That is why there is no surprise that fans still comment about their alleged affair.

As per the reports, Urvashi Rautela and Rishabh Pant were dating back in 2018. However, the duo mutually decided to block each other on Whatsapp, according to a Pinkvilla report last year. Pant shared a post on Instagram confirming his relationship with actor Isha Negi amid their relationship rumors.

While sharing the photo, he captioned it by saying, “I just want to make you happy because you are the reason I am so happy.” Also, his girlfriend and actor Isha Negi shared the picture on her Instagram handle. She captioned, “My man, my soulmate, my best friend, the love of my life.” Check out the post below:

Urvashi Rautela represented India at the Miss Universe 2015 pageant. Also, she was one of the jury members at the Miss Universe 2021 pageant. Interestingly, it saw India’s Harnaaz Sandhu take home the coveted title. Since Urvashi recently bagged the Symbol of The Armour award from the Israeli army Moshe Levy, she is also an actor and model who achieved a major feat internationally. If you don’t know, she is the first Indian to do so.

Rautela made her Debut appearance as the lead female alongside Sunny Deol in the Bollywood movie “Singh Saab The Great.” After that, she starred in Yo Yo Honey Singh’s global video album “Love Dose.” It was released in October 2014, after “Singh Saab The Great.” We all know that the song received high praises from the audience and made her a known face in the industry.

If we talk about her work, Urvashi will be seen in Jio studios’ web series “Inspector Avinash” alongside Randeep Hooda. Apart from that, she also has the Hindi remake of “Thiruttu Payale 2”, and a bilingual thriller “Black Rose” in the line. Finally, with the 200 crores big-budget film “The Legend”, she will be making her Tamil debut.

Recently, the actress reached a great milestone on Instagram as she got 45 million followers. To celebrate this occasion, she chose to perform a dangerous stunt. She was seen sliding down a glass slide from a very high elevation. However, the best thing about that stunt was she never appeared scared or nervous during it.