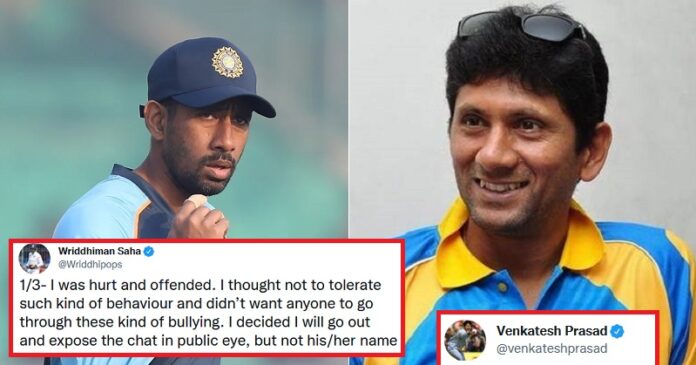 Former Indian cricketer, Venkatesh Prasad urged Wriddhiman Saha to name the “so-called” journalist who sent him threatening texts. This happened after the 37-year-old took to social media and shared the messages he received from the journalist. Wriddhiman Saha opted out to name the journalist and said that it will be against his morals to take any action because that can even lead to the end of the journalist’s career. So, he decided to not take his name on humanitarian grounds.

1/3- I was hurt and offended. I thought not to tolerate such kind of behaviour and didn’t want anyone to go through these kind of bullying. I decided I will go out and expose the chat in public eye, but not his/her name

Besides Venkatesh Prasad, the cricketer Wriddhiman Saha also received the support of the Indian Cricketers Association (ICA). The body said that it agrees to BCCI’s decision to look into the matter. The Indian cricketing body has been requested to take strict action against the journalist and that includes canceling the journalist’s accreditation if required. Saha has also been backed by the former Indian cricketers to reveal the name of the journalist.

Venkatesh Prasad came up to support Wriddhi and quoted a verse from Bhagavad Gita, he wrote:

“There is a verse in the Bhagvad Gita which translates to – “Tolerating injustice is as much a crime as committing injustice. It Is Your Duty To Fight Injustice.” It is important for Wriddhiman Saha to name this person. It will definitely set a good example.”

There is a verse in the Bhagvad Gita which translates to-
“Tolerating injustice is as much a crime as committing injustice. It Is Your Duty To Fight Injustice.”

It is important for Wriddhiman Saha to name this person. It will definitely set a good example. https://t.co/IBteuhiotS

Many fans agreed to Venkatesh’s tweet to expose the name of the journalist and backed him on Twitter:

But many netizens disagreed and found the quoting of the holy scripture unnecessary and labeled it as a publicity stunt:

The Indian veteran wicket-keeper batter has been recently dropped from the Test series against South Africa and he also opted out from the Ranji Trophy. He made some controversial allegations against the president of BCCI, Sourav Ganguly, and the Team India coach Rahul Dravid.