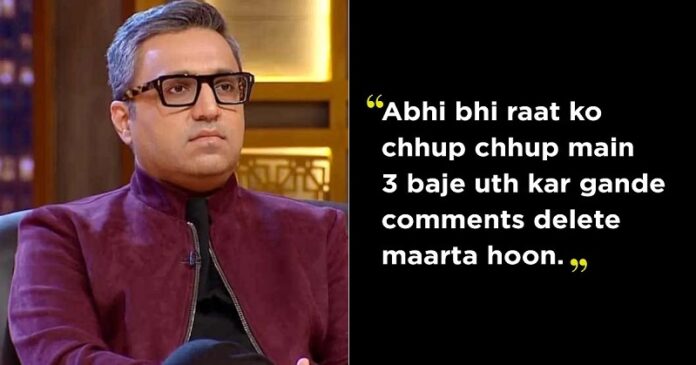 Ashneer Grover, the BharatPe founder and one of the judges in Shark Tank India is difficult to please and is known for his no-nonsense attitude. With the fame, he also got some haters as his feedback to the contestants on the show was considered blunt by many.

The judges were recently seen as guests in The Kapil Sharma Show, where Ashneer even apologized when Kapil asked him about his temper issues. Ashneer got a lot of negative attention from the audience for his temper which resulted in a lot of memes and abusive comments from the haters on social media.

Recently he was also trolled on social media for clicking a picture with the rapper Badshah and calling him his favorite singer.

In a Youtube show hosted by Rohan Joshi, ‘30 Questions with Shark Tank’s Judges’, Ashneer discussed the downside of his fame after Shark Tank India. In the interview, Ashneer Grover mentioned that he receives a lot of negative comments on social media and he ends up deleting the abusive comments late at night. Ashneer said to Rohan Joshi:

He also said that he blocks the offenders on social media. He said:

“I block them also and even select the option ‘not only this person but any account they create in the future’,”

He also mentioned that after the reality show people have started recognizing him in public places and they often ask for selfies, which he finds puzzling. He added:

“People often come to click selfies and I have to smile at two different cameras while they do that. I don’t get it. If you want a selfie, get one with a pretty actress, why me?”

He also added that his words sounded more rude on the show because he used to converse in Hindi- without any filter. He said:

This interview is quite frank and you will get to know more about the Shark Tank judge.