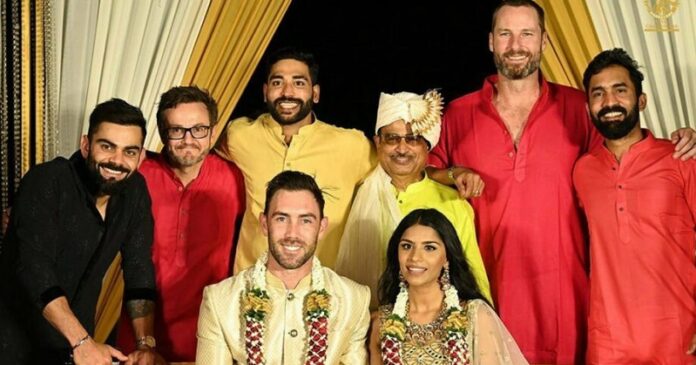 The Pushpa Craze Is Real!

The Australian cricketer Glenn Maxwell recently got married to his long-time girlfriend Vini Raman in March this year. The cricketers got together to attend and celebrate Maxwell’s wedding at a grand party hosted by RCB for the couple. The party was attended by Virat, Anushka Sharma, and the players of the team. While providing us with our annual dose of entertainment through the ongoing IPL, the cricketers including Virat Kohli had their share of entertainment off the field.

The former RCB and Indian skipper Virat Kohli was spotted at the reception with his beautiful wife Anushka Sharma.

Besides the beautiful wedding pictures and videos of the couple, one video shared by the team’s fan handle is gaining massive attention. In the viral video, Virat can be seen dancing to the popular song “Oo Antava” from Pushpa.

Kohli, dressed in a black and white kurta-pajama set, is seen shaking a leg and matching steps with other players to the trending dance number. With his effortless dance moves, Virat is ready to give competition to Samantha Ruth Prabhu. Kohli proved to his fans that the Pushpa craze is real.

The Pushpa craze is real!#ViratKohli grooves to Oo Antava Oo Oo Antava at a wedding and its a whole vibe! 💖💗 #AlluArjun @ThisIsDSP #Pushpa pic.twitter.com/sScoepbViz

In fact, he also shook a leg to the song Nacho Nacho from the much-talked-about movie RRR featuring Ram Charan and Jr NTR.

The famous Australian player, Glenn Maxwell is currently playing for the Royal Challengers Bangalore (RCB) team in the IPL. He tied the knot in an Indian-style ceremony with Vini whom he has been dating for a long time.

Earlier, Anushka and Virat set some couple goals when Anushka shared pictures of herself and hubby Virat Kohli at the party and wrote, “Wedding function in a bubble! Now I think I’ve seen and celebrated possibly every function and festival in a bubble!”

The beautiful couple nailed their ethnic looks. At the party, Anushka looked stunning in her magenta suit with golden embroidery and Virat donned the kurta pajama look.

Wedding vibes at the RCB camp last evening as we got together to celebrate #MaxiVins with a nice touch of Indian tradition. #PlayBold #WeAreChallengers #IPL2022 #Mission2022 #RCB #ನಮ್ಮRCB pic.twitter.com/MuvvGYTf4l

In the next group stage encounter, which will be played on April 30 (Saturday), RCB will now take on the team Gujarat Titans.