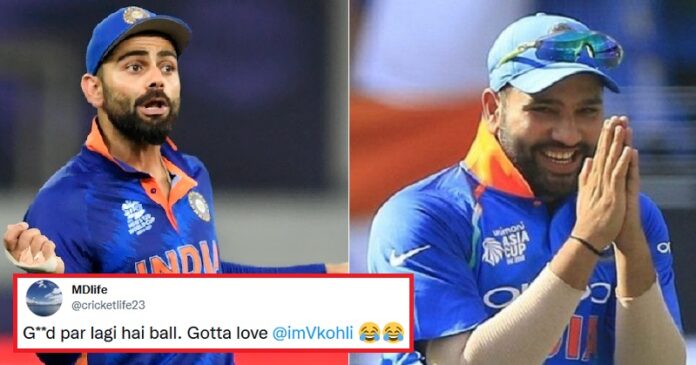 India won by six wickets (7 balls left) in the game.

Virat Kohli, the 33-year-old former Indian Captain continues to take some important decisions on the field. He was often spotted discussing with new skipper Rohit Sharma in the first T20I against West Indies and also during the preceding ODI series. Virat also succeeded in convincing Rohit to take a couple of DRS (Umpire Decision Review) in the ongoing series with the West Indies.

Meanwhile, India earned a 1-0 lead in the three-day match series and recorded a pleasant six-wicket win in the game. While Rohit made 40 runs off 19 balls, the debutant Ravi Bishnoi successfully took two wickets in the match in his four overs. The Indian team chased down 158 in 18.5 overs. For his astonishing spell, Bishnoi has been declared the Player of the Match. Harshal Patel (2/37) also took two wickets, pace duo of Bhuvneshwar Kumar (1/31), the leg-spinner Yuzvendra Chahal (1/34), and Deepak Chahar (1/28) took one apiece.

Kohli was caught using foul language in the stump microphone in the opening T20I match.

When did it happen?

After winning the toss, India elected to bowl. It happened in the 9th over during the fourth delivery when Yuzvendra Chahal was bowling and Roston Chase was the batter. Chase went for a paddle sweep when Chahal delivered a loopy-flighted ball but the ball ended up hitting his pad. The Indian fielders appealed for an LBW but the stand-in Umpire remained unconvinced. Chahal made an appeal to the skipper Rohit to go for DRS, though the delivery point of impact appeared to be outside the line of the off-stump.

Kohli informally suggested that the ball has hit Chase’s buttock. The former Indian skipper’s assistance became viral when the stump microphone recorded his remark, “G**d par lagi hai ball,”. Eventually, Rohit agreed to go with Kohli’s suggestion and took a DRS which served no purpose and India lost a review.

The player who fetched a whopping 10.75 crore deal in the IPL mega auction, Nicholas Pooran was in a good form who went on to score 61 off 43 balls. The other IPL recruits Kieron Pollard scored 24 off 19, and Kyle Mayers scored 31 off 24.

Venkatesh Iyer finished it off with a six!

Venkatesh Iyer hits the winning runs for #TeamIndia as we win by 6 wickets.@Paytm #INDvWI pic.twitter.com/aaE7FUOR9J