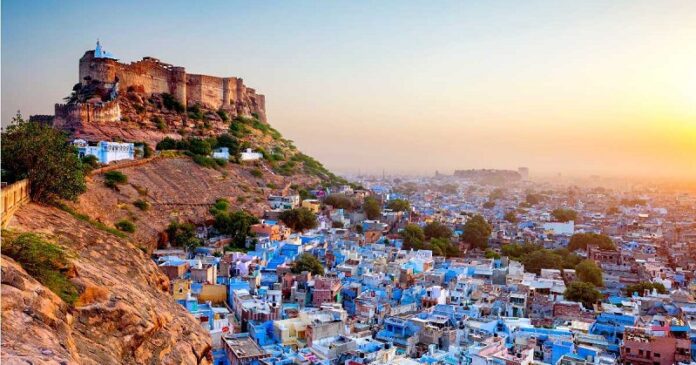 Jodhpur is one of the most beautiful cities of Rajasthan in India. It is one of the largest cities in Rajasthan and is also widely known as “Gateway to Thar”. You will definitely get the feeling of time travel the minute you step into Jodhpur. It is as pure and abraded as you witness in the Indian culture. Apart from Jodhpur, you will not see this purity in other tourist places situated in Rajasthan.

However, there is one significant feature of Jodhpur that it has blue-walled houses. This distinguishes it from other places. In the locality of Mehrangarh Fort, they are concealed in the streets of the old city. Every city of Rajasthan, especially Jodhpur has something unique about it. From keeping the city cool to tackling termites, there are several theories why Jodhpur is the “Blue City.”

How To Get To The Blue Houses?

The nearest place to visit the blue houses is namely Navchokiya. You can reach there through a cab or a bike and then walk into the lanes that have blue houses right from there. It looks mesmerizing.

Why Are These Houses Painted Blue?

1. To Keep Termites Away:

There are few people in Jodhpur who strongly believe that the blue color enables to prevent the houses from termites. Because earlier, termites caused harm to numerous historic buildings and structures in the city. Therefore, the residents of the city painted their houses blue to preserve them from these disgusting pests. This color is a combination of two things, that is, limestone and copper sulphate. It helps in keeping bugs away and also delivers a soothing and calming effect.

It is believed that blue is related to the Brahmins. But, the residents who discovered this concept completely disregard this belief and confirms that there are as many families from other castes as Brahmins who live in the blue-painted houses.

2. The Blue Color Is Associated With Lord Shiva:

Lord Shiva drank the extremely dangerous poison that came out while churning the Ocean Milk to save the planet. Eventually, his body turned blue after drinking that poison. That is why many elder people believe that the blue color is linked with Lord Shiva and treat it as a sacred color. His innumerable followers painted their houses in blue colors because of this theory and later the city called as, Blue City.

3. To Keep The Houses Cool:

Few people residing in the town hold a belief that the blue color is a representation of social status. Earlier, the Hindu caste system was treated to be the unit for deciding social status. According to the reports given by local residents, the houses of Brahmins are painted blue to differentiate themselves from the lower-caste communities. That is why blue is associated with the Brahmins. Referring to these houses, you may find the word Brahmin houses.

5. Best Panoramic View From Mehrangarh Fort Of The Blue City:

From Mehrangarh Fort, you can see the top panoramic views of the blue houses. While having a luxurious dinner at an Indique restaurant, you can enjoy the beautiful look at the blue houses and the fort. Additionally, Pachetia Hill sunset viewpoint is one of the most amazing sites for you to enjoy. You must visit this place for its sand dunes, palaces, bumpy camel rides, and sprawling forts. The landscape is mesmerizing, scenic, and can be assured of a memorable experience.

10 Romantic Chinese Series That Will Make You Fall In Love

11 Top Rated TV Shows In India, According To IMDb

25 Indian Web series From Last Decade Everyone Must Watch

20 Normal Indian Things That Are Weird For Foreigners