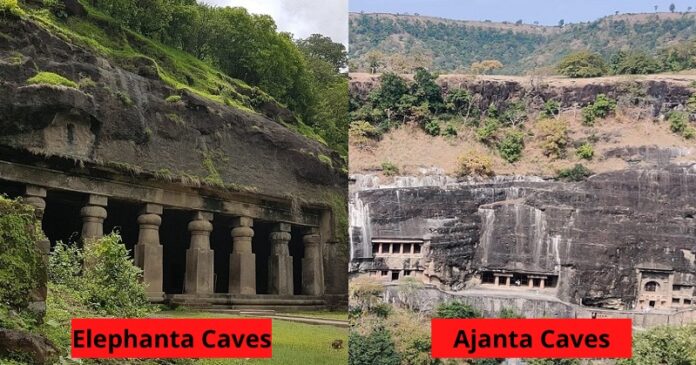 India’s history is lengthy and illustrious. One of the world’s oldest civilizations, as well as a diverse mix of religions and civilizations, can be found in the country. A plethora of monuments dots the landscape, tracing the country’s monarchical and imperial histories. Each one provides a different story about the India of the time. Emperors, governments, and, in certain cases, religious groups built monuments of India, which are scattered around the country. Some were demolished and rebuilt, while others have endured the test of time and natural disasters to survive. The monuments of India to see in Western India for anyone visiting this great country is listed below.

Here’s the list of the top 15 historical monuments in western India to visit once in a lifetime:

Jalgaon is 60 kilometers away, and Aurangabad is 107 kilometers away. The site is a protected monument under the care of the Archaeological Survey of India, and it comprises 32 Buddhist caves not far from the same-named mediaeval village. In addition, since 1983, the Ajanta Caves have been a UNESCO World Heritage Site. The thirty rock-hewn caves at Ajanta are either Chaityas (chapels) or Viharas (religious buildings) built into a cliff’s scarp (monasteries). The cave walls are covered in paintings, many of which are still in their original colors. Exquisitely made sculpture adorns the building’s outer walls. The Ajanta paintings’ Buddhist theme depicts the story of Lord Buddha’s life and previous earthly travels. It is also listed in between 10 monuments of India.

In the 11th century AD, Rani-ki-Vav was built on the banks of the Saraswati River as a memorial to a ruler. On the Indian subcontinent, step-wells are a unique type of subsurface water resource and storage system that has been in use since the third millennium BC. They progressed from a simple pit in sand to complex multi-story works of art and architecture over time. Rani-ki-Vav was constructed at the pinnacle of artisans’ ability in step-well construction and the Maru-Gurjara architectural style, demonstrating mastery of this complex method as well as tremendous beauty in detail and proportions. It is one of the historical monuments of India.

The Goa Churches and Convents are an important part of India’s World Heritage List and illustrate Asia’s evangelization. Only a few of the landmarks are the Church of Our Lady of the Rosary, Se Cathedral, Basilica of Bom Jesus, and the Church of St. Francis of Assisi. The transmission of Manueline, Mannerist, and Baroque art throughout Asia was aided by these monuments.

The Western Ghats mountain range, which predates the Himalayas, comprises significant geomorphic features as well as diverse biophysical and biological processes. The Indian monsoon weather pattern is influenced by the high montane forest ecosystems at the site. The site is one of the best examples of the monsoon system in the world, as it serves to moderate the region’s tropical temperature. It is also one of the world’s eight “hotspots” of biological diversity, with a high level of biological diversity and endemism. It is also listed in between 10 monuments of India.

This archaeological, historic, and present cultural heritage site is situated near the city of Champaner in Gujarat’s Panchmahal district. Citadels, palaces, religious complexes, and other monuments dating from the seventh to fifteenth centuries. The Kalika Mata Temple, built atop Pavagadh Hill, is a famous temple that attracts thousands of pilgrims every year. The Jami Masjid and the Kevda Masjid are two of the other monuments.

The Elephanta Caves are on Elephanta Island (also known as Gharapuri Island), which is made up of two hillocks separated by a narrow valley in Western India. The little island is littered with historic archaeological artefacts that serve as the only witnesses to its diverse cultural past. The location was occupied as early as the 2nd century BC, according to these archaeological remnants. Between the 5th and 6th centuries AD, the Elephanta Caves were excavated out of the rock. The most important of the caverns is the Great Cave 1, which measures 39 meters from the front entrance to the back. The Dumar Lena cave in Ellora, India, looks a lot like this cave on the western hill.

These 34 monasteries and temples, which span more than 2 kilometers and are located near Aurangabad, Maharashtra, were dug side by side in the wall of a high basalt cliff. Ellora brings ancient India’s civilization to life with its unbroken line of monuments dating from 600 to 1000 A.D. With sanctuaries dedicated to Buddhism, Hinduism, and Jainism, the Ellora complex is not only a one-of-a-kind artistic and technological feat, but it also represents monuments of India history.

Mumbai was influenced by two key architectural styles during the 19th and 20th centuries: Victorian New-Gothic and Art Deco. Among the 19th century, Victorian Neo-Gothic structures that surround the Oval Maidan are the Mumbai High Court, the University of Mumbai, the City Civil and Sessions Court, and the Rajabai Clock Tower. The Art Deco style is used to decorate many privately owned buildings and entertainment venues. These two varieties have changed the skyline of Mumbai.

The Chhatrapati Shivaji Terminus in Mumbai, originally known as Victoria Terminus Station, is an outstanding example of Victorian Gothic Revival architecture in India, combining themes from Indian traditional architecture. The structure, designed by the British architect F. W. Stevens, became a symbol of Bombay’s status as India’s most important international mercantile port and “Gothic City.” Beginning in 1878, the terminal was built in a ten-year span in a High Victorian Gothic style based on late mediaeval Italian models. Traditional Indian royal architecture is reflected in the stone dome, turrets, pointed arches, and distinctive ground plan.

One of India’s most stunning sights and monuments of India history is the Gateway of India, which is located in Mumbai. The huge structure was completed in 1924. The gateway, which is positioned at the tip of Apollo Bunder, overlooks the Mumbai port, which is flanked by the Arabian Sea in the Colaba district. The Gateway of India is a popular tourist destination for first-time visitors to India. It is a monument that commemorates India’s major ports. This monument formerly reflected the majesty of the British Raj in India.

Those found guilty of breaching Shivaji Maharaj’s rule were thrown to their deaths in the valley at Takmak Tok, a point in the Raigad fort. During the rainy season and in the winter, the location is quite beautiful. To reach the takmak tok point’s final point, you must be cautious.

The Jaipur City Palace is a sprawling edifice with multiple courtyards and segmented structures. Sawai Jai Singh II, the founder of Jaipur, built it between 1727 and 1732. The 288-year-old palace is one of the best-preserved specimens of Rajputana architecture, and all Royal valuables have been preserved, including paintings, dishes, and chandeliers. The idea for building a beautiful palace came from Maharaja Sawai Jai Singh II. He commissioned Bengali architect Vidyadhar Bhattacharya and Sir Samuel Swinton Jacob to design Jaipur. It is one of the famous monuments of India.

Maharaja Jaswant Singhji of Jodhpur (1873-1895) had a stunning marble memorial made in his honor by his son Maharaja Sardar Singhji (1895-1911), and it is known as the “Taj Mahal of Marwar.” Puja (ritual) is performed in the main hall, which is built to look like a temple. The Rajput clans are famed for their reverence for their forefathers. It is one of the famous monuments of India.

Longewala is a border town in Rajasthan, India, located in the Thar Desert in the western portion of the Jaisalmer district. It is located near the Pakistani border and is well known as the site of the Battle of Longewala during the 1971 Indo-Pakistani War.