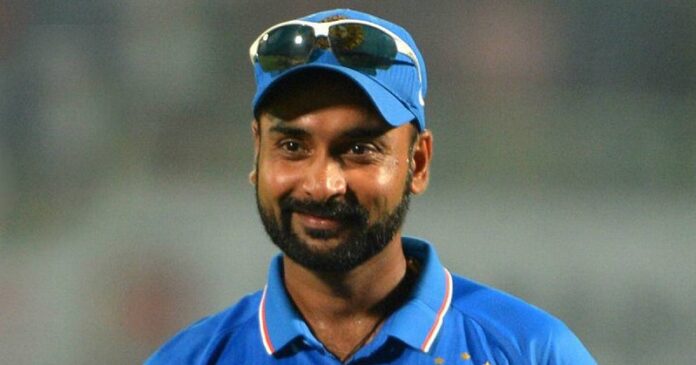 In match no. 55 of the Indian Premier League 2022 this season, at DY Patil Stadium in Navi Mumbai, Chennai Super Kings (CSK) won the match against Delhi Capitals (DC). The team led by MS Dhoni was focused and put up with an incredible performance in the first innings scoring 208/6. CSK players Devon Conway and Moeen Ali were in great form and their efforts made headlines.

But the 40-year-old Chennai Super Kings (CSK) skipper grabbed eyeballs when he was captured in the camera eating his bat as he sat in the dugout, waiting for his chance to come out and bat. His picture went viral in no time.

The former Indian spinner, Amit Mishra came up with a perfect reason behind Dhoni’s act. Mishra has not only been following the league but he was also found tweeting about some moments from the ongoing matches on several occasions. He took to Twitter to explain that Dhoni always likes to keep his bat clean and revealed that the wicket-keeper batter makes sure that no threads or tape come out of the edges of his bat.

For those who want pic of Dhoni eating Bat 🤠 pic.twitter.com/BGPFznY39E

“In case you’re wondering why Dhoni often ‘eats’ his bat. He does that to remove tape of the bat as he likes his bat to be clean. You won’t see a single piece of tape or thread coming out of MS’s bat. #CSKvDC #TATAIPL2022,”

In case you’re wondering why Dhoni often ‘eats’ his bat. He does that to remove tape of the bat as he likes his bat to be clean. You won’t see a single piece of tape or thread coming out of MS’s bat. #CSKvDC #TATAIPL2022

Well, Dhoni’s unconventional act did help CSK to score big and win against Delhi Capitals. Dhoni also impressed his fans with his batting display. When the veteran cricketer walked out to bat in the 18th over, he scored 21 runs in eight balls during his stay. After hitting two sixes and a four Dhoni remained unbeaten as CSK breached the 200-run mark and set a target of 209 runs for Delhi Capitals.

However, the Capitals kept losing wickets at regular intervals and after eight overs were stuttering at 73/3.

This is how the fans reacted to Amit Mishra’s Tweet:

Eat and Bat in the same sentence will always be the most scariest thing ever. Took me a while to realize that the tweet is about a different bat.