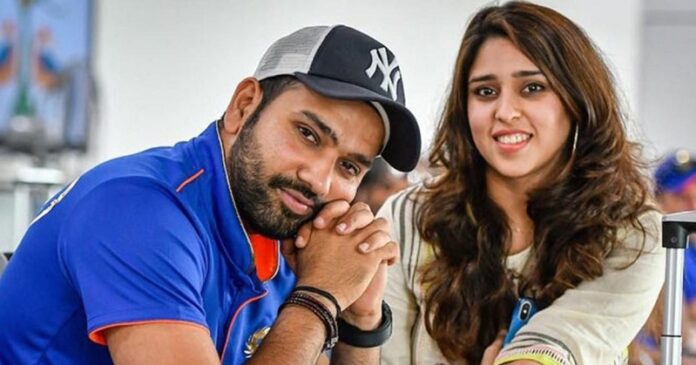 The Mumbai Indians’ skipper Rohit Sharma recently celebrated his 35th birthday on Saturday. In the ongoing 2022 edition of the Indian Premier League Rohit has not been in his best form and is going through a lean patch in his career. The fans were expecting him to earn some big innings for his team, but unfortunately, the cricketer failed to make it big with the bat yet again.

However, Rohit Sharma and his team were relieved finally when the five-time champions Mumbai Indians (MI) defeated Rajasthan Royals (RR) by five wickets in the 44th match of the ongoing season of the Indian Premier League (IPL) after losing the first eight consecutive games.

Rajasthan Royals set the target of 159 runs, Mumbai got off to a poor start as in the third over they lost the wicket of Rohit Sharma. The ‘Hitman’ could manage to score only two runs in five balls and was dismissed by Ravichandran Ashwin.

After Rohit’s dismissal, his wife Ritika Sajdeh looked devastated when she was captured on camera. Even Rohit looked heartbroken when he made his way to the dugout.

However, a heartwarming moment was also caught on camera, the event occurred just after Rohit’s dismissal. Ravichandran Ashwin’s wife Prithi Narayanan was captured consoling Ritika Sajdeh by giving her a warm hug.

The heartwarming gesture from Prithi was indeed admirable and the video of the same went viral and has been doing the rounds on the internet leaving everyone in awe with the sweet gesture.

On the other hand, talking about the match, Ashwin celebrated the dismissal with ecstasy as it was a big wicket for Rajasthan Royals.

After losing Rohit Sharma and Ishan Kishan, the responsibility was once again on the shoulders of Suryakumar Yadav to turn things in favor of his team. The Mumbai batter steered the run chase by playing an amazing knock of 51 runs on a dual-paced pitch. With a partnership with Tilak Verma, he managed to take Mumbai Indians closer to victory. Tim David hit a few long ones to help Mumbai finish off with grace. After the first win, this season everyone on the MI team cheered with joy.

On account of his poor form in IPL 2022 Rohit Sharma managed to score just 155 runs in 9 matches at a strike rate of 125. These numbers were not even close to the expectations of the fans of the Mumbai Indian skipper Rohit Sharma. He has also struggled to score a single fifty-plus in the first 9 matches of IPL 2022.