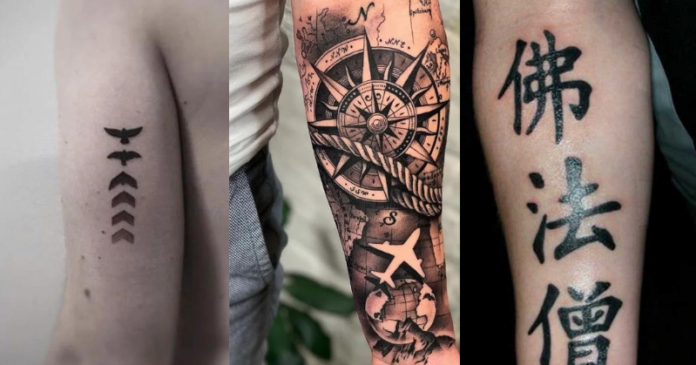 One of the most important personal decisions you’ll ever make is getting a tattoo. It’s a good idea to dig deeper than the first image while designing your new piece of artwork. What does it signify in today’s world? In the past, what did it mean? What exactly does that imply to you? Is it going to be useful to you in the future? For men, there are numerous meaningful tattoo options.

There are inspirational and meaningful options for men’s tattoo ideas, ranging from old religions and histories that laid the foundations of the world to today’s current culture.

To help you make the decision, here is a list of 20 meaningful tattoo ideas for men,

This is an animal with incredible strength. The wolf has long been seen as a guardian and guide, as its nature suggests. It also represents the concepts of intelligence and bravery. The call of the wild is another interpretation.

Symbols of one of the world’s most influential religions, the cross could be one of the most meaningful symbols of all for members of the Christian or Catholic faiths. The cross is a symbol of contradiction for some, as its four hands stretch onward without ceasing, among many other connotations.

The legendary nature and history of the phoenix have turned it into a symbol of rebirth, change, successfully passing through fire, and renewing oneself in the face of adversity. Many of these connotations have persisted in popular culture.

The all-seeing eye resembles the human eye but has a deeper connotation. It is a Masonic emblem that represents the link between God and Man, as well as the ascension to higher wisdom and the state’s strength. Other interpretations are based on the imagery and overall design of the piece.

An anchor tattoo has a long history as a symbol of hope and final resort. The anchor is a popular choice among sailors, both old and modern, and it still means the same thing today as it did in the past. Dedication, strength, and stability are some of the other concepts at play.

Koi exemplify the manly traits of drive, perseverance in the face of adversity, and the urge to evolve beyond one’s natural state. It’s a lesser-known sign that gives the image a sense of surprise and discovery.

The lion, as the king of the beasts, represents courage, royalty, power, and more. There are many various variations on the lion’s underlying themes based on the religious or cultural context you choose.

The mountain, steadfast and tranquil, represents a completed task in its purest form. It could be triumphing over a human defect, completing a journey, or mastering a talent. The deeper meaning is determined by the story behind the colossal peak.

The octopus’ slippery limbs entangle mystery, illusion, depth, and diversity. Other interpretations include an open attitude to the universe, the wonder of the water, and the creature’s innate powers.

The shark, the lord of the seas, symbolises great stealth, exceptional focus, and incredible self-awareness. A shark tattoo also represents protection from the ocean’s forces, as the king of the oceans is watching over you.

The primary message sent by a skull image is that death is approaching. But there’s more to it than meets the eye. It can imply anything from thriving every day to boldness in the face of death, depending on the tale behind it. This one is a great tattoo idea for the wrist.

This sign has far more meaning than a casual observer could realise, it is very popular among the tattoo ideas with meaning. It represents four important qualities: loving-kindness, compassion, sympathetic delight, and equanimity. It is an essential part of Hinduism and Buddhism.

Classical roses are used to represent, accentuate, and remember love and beauty, and they can be incorporated into a variety of styles.

Traditional writing tattoos will always have a place in the world as long as there are languages to be deciphered, milestones to be commemorated, and lost loved ones to remember. A lettering tattoo allows you to permanently engrave your phrase into your skin and are the best tattoo ideas with meaning.

A minimalist tattoo isn’t always straightforward. While minimalist tattoos are often small and sparse, they are often meticulously crafted with attention to detail and consideration for things other than the tattoo itself. A cleverly created minimal tattoo could be as easy as three lines, yet depending on the tattoo observer and the posture of the subject’s arm, it could have a dozen various meanings.

Traditionally, sailors tattooed compass tattoos as a kind of protection. They were used as directions on ocean expeditions and represented a longing for home and the things that had been left behind. The compass has grown into a prominent tattoo genre, denoting travel or wanderlust, from humble flash tattoos in the past.

In Sanskrit, the word “mandala” signifies “circle.” They represent equilibrium, eternity, unity, and perfection. The mandala is a typical representation of the universe in Hindu and Buddhist religions. Mandalas are frequently utilized to advocate a sense of quiet, tranquility, and harmony.

Name tattoos are among the most common expressions that may be inscribed on one’s skin. Written name tattoos are really essential and well worth the everlasting commitment when thinking about your kids, loved ones, or even the remembering of deceased persons special to you.

A portrait tattoo can be the face of the person you love. It can be anyone from your life or even your favourite movies, shows, or books. It will become your everlasting companion and a portrait tattoo will show your love towards the person to everyone and be a reminder to yourself.

People go as much as tattooing a place that they love. It can be a place you grew up in or a fictional place you adore. This brings a sense of comfort and warmth to the person.

Take the time to choose carefully, work out your budget, and talk to them before sitting in the chair for your first piece. I guarantee you that artists have seen everything, and can help you through the process.