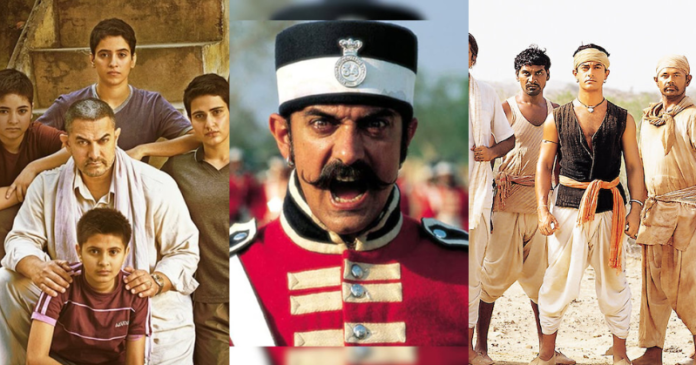 Aamir Khan, is a renowned actor, producer, and director with a unique talent in the profession. Aamir Khan is in a class by himself. He is one of the most varied actors in the Indian cinema business in decades, and he continues on his triumphant path. No other Bollywood actor has ever done such incredible work. The movies of Aamir Khan are perfect examples of his versatility. Aamir Khan’s films are always unique in comparison to the rest of Bollywood. Aamir Khan has always produced outstanding stuff.

So, here is a list of the 10 best well-known and legendary movies of Aamir Khan.

This Aamir Khan film is regarded as one of his most emotionally charged. Aamir Khan directed this film, which deserves to be included in the Best Aamir Khan Films list. Ishan Awasthi is an eight-year-old boy who is transferred to a boarding school after his parents reprimand him for his poor academic performance. Ram Shankar Nikumbh, an art teacher, recognises Ishaan’s dyslexia and diagnoses him. Later, he assists him in his recovery.

Aamir Khan chooses assignments based on his age, which demonstrates his professional experience. Dangal was a film that paved the way for others. This Aamir Khan film is Bollywood’s highest-grossing film. The true life of wrestling sisters Geeta and Babita Phogat is the inspiration for this film. Mahavir Singh Phogat, their father, was a former Haryana wrestler. His ambition was to have a son who would win a gold medal in wrestling for India. He recognizes that his girls are gifted. From there, the trip begins. In some scenes, this Aamir Khan film will make you cry. The story is based on an actual incident.

Rajkumar Hirani has once again directed a fantastic Aamir Khan film. Aamir Khan plays an innocent alien who lands on Earth and quickly finds himself in hot trouble. He misplaces his communication gadget, which allows him to communicate with the spacecraft. Meanwhile, he seeks the assistance of a reporter named Jagat Janani (Anushka Sharma) to locate his device. He raises several issues, including religion, caste, and others.

Farhan Akhtar, a skilled director, directed this film. Aamir Khan’s films are consistently excellent, and his contributions should be recognised in each one. The plot revolves around three friends, Akash (Aamir Khan), Siddharth (Akshaye Khanna), and Sameer (Saif Ali Khan), who become distant after college due to their differing opinions. This is a film that you should watch with your closest friends.

The one was nominated for an Academy Award, and deservedly so. Every time Lagaan is telecast or streamed on OTT platforms, it is still watched. Ashutosh Gowariker directed this fantastic film. It is set during the period of the British administration when villages faced food scarcity and a lack of funds to pay taxes.

Captain Andrew Russell has set a challenge to his side to defeat them in cricket, and if they succeed, the three-year tax would be lifted. Bhuvan (Aamir Khan), a young guy, accepts the challenge for the village. This film transports us to a time when the British ruled over Indians and depicts the plight of the Indian people.

Rajkumar Santoshi is the director of this film. This Aamir Khan film is deserving of the title “Best of Aamir Khan Films.” The characters Amar Manohar (Aamir Khan) and Prem Bhopali (Salman Khan) in the film Andaz Apna Apna are two conmen with no money, few prospects, and great desires.

They both go to Raveena’s house after learning of her arrival in India as an heiress. Even though Prem falls in love with Raveena’s assistant, Karishma, they are both vying for her affections. Then they stumble into Raveena’s father, a local mobster with a vendetta against Raveena, and his double-crossing goons, and the fun really begins.

Choices—easy it’s to pick between right and bad, but deciding between the greater of two good or the lesser of two evils is what defines a person’s life. Kunal Kohli is the director of this film. This Aamir Khan film features incredible songs that are still remembered today. Zooni, a visually handicapped girl, falls in love with Rehan, a tour guide (Aamir Khan). Later, he assists her in regaining her vision, but she is unaware of Rehan’s identity.

Siddharth Marathe is a boxing champion in his hometown. Jai works as a manager for Raunak Singh, a former boxing champion who runs a tourism business, but Raunak is also a known criminal. Siddharth quickly begins working for Raunak, but after Raunak assassinates a guy named Hari, Siddharth recalls his father’s words, who was a freedom warrior. He decides to confront Raunak and battle him.

Mangal Pandey is an Indian sepoy serving in the British Army in Afghanistan in the 19th century when he befriends Captain William after saving his life. The East India Company, on the other hand, creates a weapon that uses pig fat or bull tallow, which is offensive to Hindu and Muslim religious beliefs. As a result, Mangal Pandey vows to rise against the British and inspires the Indian people to do the same.

When a film wins the National Award for Best Film, you know it’s a fantastic film. Rang De Basanti is still regarded as one of Aamir’s crowning achievements in the cinema industry. The unique plot was fascinating to watch. Sue, a British filmmaker, travels to India to make a film on Indian freedom warriors, with the assistance of five friends who unwillingly agree to play the revolutionaries. While working, the group of modern youths begins to comprehend the patriots’ views. In the present, a catastrophe transforms them into rebels who decide to fight for justice.

Also Read: 20 All Time Best & Old Bollywood Comedy Movies You Must Watch in 2022

Aamir Khan is an actor, producer, and director from India. Khan has established himself as one of the most prominent and important actors in Indian cinema throughout his thirty-year career in Hindi films. His film selections and productions usually have something unique to offer. Since his debut, he has played a variety of parts and continues to wow us with his immaculate acting abilities.