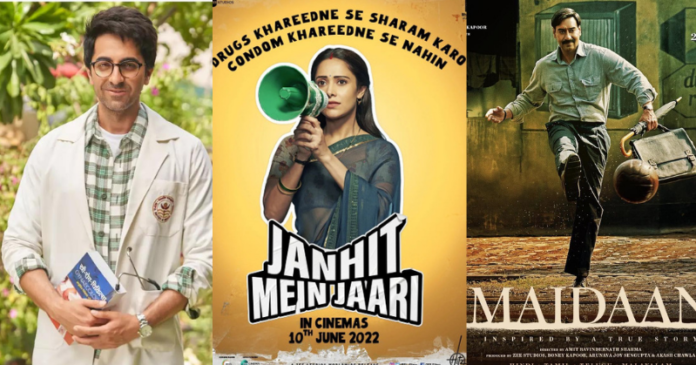 We present you with a list of all upcoming Bollywood movies releasing in June 2022 with the movies release date, trailers, and where you can watch them. The Bollywood movies releasing in June will be released in theatres as well as on the OTT platforms be it Amazon Prime Video, Netflix, or Disney+ Hotstar. So, you can mark the dates, grab your tickets and load up your streaming apps. We have listed some of the best upcoming movies 2022 has to offer so that you do not miss out on your fair share of entertainment.

Here is the list of 10 Bollywood movies releasing in June 2022 to watch:

This is the story of the fearless king, Prithviraj Chauhan, and his battle with Muhammad of Ghor, a movie produced under the banner of Yash Raj Films. Akshay Kumar plays the lead character of Prithviraj. The movie also features Sonu Sood, Manushi Chhillar, and Sanjay Dutt.

Maidaan is a sports drama where Ajay Devgn plays the character of a football coach Syed Abdul Rahim based on the golden era of Indian football (1952–1962). The upcoming Bollywood movie also stars Priyamani. Aryann Bhowmik, Rudranil Ghosh, etc. The music for this new Bollywood film is composed by the maestro, A. R. Rahman. Maidaan is produced by Zee Studios with Bayview Projects LLP. This makes it to the 2022 Bollywood movies list.

Srijit Mukherji’s second Hindi language film is under production. This movie features some of the finest actors in India like Neeraj Kabi, Pankaj Tripathi, and Sayani Gupta. Based on the true events in villages bordering Pilibhit Tiger Reserve the film is said to be a “dark humour laced satire”. This is the second Hindi film of the acclaimed Bengali director Srijit Mukherji. This is among the must-watch upcoming Bollywood movies 2022.

This upcoming Bollywood movie released in June 2022 starring Vijay Raaz and Nushrratt Bharuccha is a story of a young girl who takes up the challenge of selling condoms in a small town in MP. Janhit Me Jaari takes the audience on a journey through the challenges the girl has to face due to the Indian societal taboos.

A comedy-drama Hindi film produced by Karan Johar, Hiroo Yash Johar, and Apoorva Mehta is one of the most awaited June releases 2022. The story revolves around family values, the generation gap, and complications of the married life. The Jug Jugg Jeeyo cast includes Anil Kapoor, Kiara Advani, and Varun Dhawan.

The film No Means No is is said to be shot in three languages simultaneously: Hindi, English, and Polish. It is an upcoming Indo-Polish romantic thriller that follows the story of an East Indian man falling in love with a Polish girl after traveling to Poland for a skiing competition. The upcoming movie of 2022 features Gulshan Grover, Sharad Kapoor, Anna Guzik, Deepraj Rana.

Mission Majnu is an upcoming spy-thriller featuring Sidharth Malhotra based on the untold story of India’s greatest covert operation. The movie is directed by Shantanu Bagchi and also stars Rashmika Mandanna.

Doctor G is one of the upcoming Bollywood movies releasing in June 2022, directed by Anubhuti Kashyap and produced by Junglee Pictures. The movie features Ayushmann Khurrana and Rakul Preet Singh in lead roles with Shefali Shah and Sheeba Chaddha in supporting roles.

Khuda Haafiz: Chapter 2 – an upcoming Indian Hindi-language action-thriller film is a sequel to the 2020 film Khuda Haafiz. The story revolves around the story of a couple’s journey amid the challenges of societal pressure after they went through a huge turmoil.

This upcoming Bollywood Comedy film follows the plight of a man who juggles between maintaining his relationship with his wife and girlfriend. The pati is played by Vicky Kaushal and Bhumi Pednekar is the wife and Kiara Advani is the girlfriend. It is one of the Bollywood movies upcoming releases this year.

We hope you are as excited as we are for the upcoming B-town releases this June 2022. The list includes movies of various genres like thriller, romance, comedy, drama, etc. So, get ready to grab your tickets on the mentioned movie release dates if you want to enjoy the first show of these amazing upcoming movies.

Also Read: Top 10 Women-Centric Bollywood Movies That Made The Most Impact