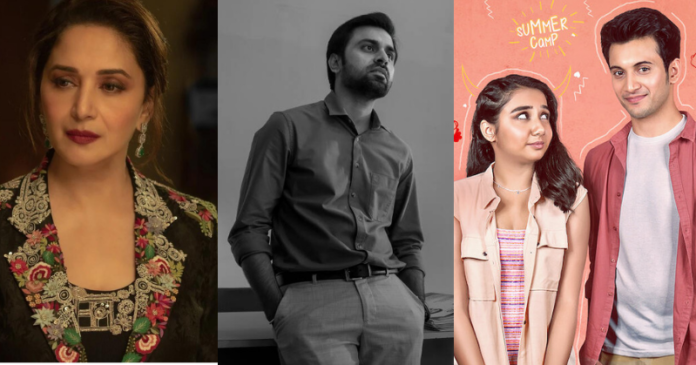 On the subject of the Best Netflix series in Hindi, there are a number of episodes that have made an impact and succeeded in giving exceptional content from beginning to end. Netflix has always delivered, whether it’s telling amazing tales, forging new ground, or delivering outstanding performances. So, here are some of the best Hindi web series on Netflix that you should watch on any given day.

Netflix series, Delhi Crime depicts the aftermath and serious ramifications of the December 2012 Delhi gang-rape atrocity (widely known as the Nirbhaya case). The story of Delhi Crime revolves around the investigation, capturing the criminals, and nationwide protests and pressure. It all begins on the 16th of December night when cops encounter the male and female victims at the Mahipalpur flyover. This is one of the best Netflix series in Hindi.

It’s about an affluent couple from the upper class trying to fall out of love! It all starts with the ‘decoupling’ being presented as an intriguing story. Arya’s leading man is a well-known author who comes in second only to Chetan Bhagat. He wants a divorce from his venture capitalist/company creator wife Shruti, but they couldn’t readily tell their daughter about it. They go through this ‘falling out of love’ process by doing activities they would do without each other as they wait to inform her. What happens next for them? So, stay tuned for season 2.

A gripping family drama about a global superstar, wife, and mother who mysteriously vanishes. Her meticulously manufactured mask is peeled away as authorities and loved ones search for explanations for her disappearance, uncovering hidden truths and heartbreaking lies in the life of a legendary actress. Finding Anamika was the previous name for The Fame Game.

As they struggle with several disciplines, Vaibhav and some other students begin to doubt their aim of getting into IIT. Vaibhav is further weakened by jaundice, but witnessing his superiors succeed restores his faith.

Ladies Up is a collection of four 15-minute works by Comicstaan grads Prashasti Singh and Supriya Joshi, Queen of Comedy Niveditha Prakasam, and Kaneez Surkha, the more experienced of the bunch. They discuss casual sex, odd sex, kinky sex, and, shockingly, a few other topics throughout their different sets.

The protagonist of Yeh Kaali Kaali Ankhein is Vikrant, an engineering graduate who urgently wants to leave his hometown, the fictional village of Onkara. However, he finds himself the unwanted focus of attention and desire of Purva, the daughter of the town’s gangster-politician. This brings about a change in his life as he fights Purva’s approaches and pursues his girlfriend Shikha with his desire of starting a family with her.

In this series, four short stories by acclaimed director and writer Satyajit Ray are adapted for the screen, ranging from satire to psychological thriller.

Young adults are followed in short films as they traverse the range of emotions that come with establishing love connections in unexpected places.

The story follows Sameera, Satyajit, and Devraj, three children from Bardez, Goa. As their first mission, the curious pals organize a ghost club and decide to hunt a ghost at an old haunted villa in their neighborhood.

10. What the Love! With Karan Johar

Karan Johar, a celebrity film director, and host plays ‘the light at the end of the deep dark tunnel called love,’ providing six ‘wrecked’ singletons a chance to heal their love relationships in this seven-part series. It is speculated as to the best Netflix series in Hindi dubbed. Karan is the cupid, love guru, and psychotherapist on this makeover dating program, with the help of his celebrity buddies, including actors, anchors, and comedians, a cosmetics artist (Shaan Muttathil), and a stylist (Maneka Harisinghani).

House of Secrets: The Burari Deaths, a Netflix original series, delves further into the sociological and psychological aspects of a case that made global headlines in 2018. That title is as seductive as it will allow.

Three generations of the same family were found dead in what seemed to be an occult ritual gone bad in the living room of their north Delhi home one summer morning.

Sheel, a gentle 47-year-old wife, and mother, is put under exceptional circumstances in her quest to learn the truth after a personal tragedy brings her world crashing down. She becomes engaged in white-collar crime and corrupt politics and gets sucked down a rabbit hole of violence and power. It completely changes the world she lives in. This is the best Netflix series in Hindi 2022.

Mismatched is a Netflix original series about a young woman who desires more than an arranged marriage and a young guy who fantasizes about finding the ideal bride. Mismatched is one of the best Hindi series on Netflix 2022.

When a cautious Mumbai constable embarks on an undercover operation, she discovers her true ability and begins the path to empowerment.

In the premise of a cruel case of rape and murder, Aranyak analyses human urges and misdeeds. Set in a fictional Himachal Pradesh town, the series is a prolonged mystery that gradually draws us into a jungle where everyone seems to be hiding a secret, and avarice and redemption are the dominant emotions. Aranyak is among the best Hindi shows on Netflix.

Netflix has arrived in India after more than two decades and is always in the news for various reasons. Despite being the most costly OTT in India, the Indian audience appears to have taken to Netflix. There are a few Netflix online series in Hindi that you can simply ignore, but there are so many Netflix series in Hindi that you should not miss. Hope you liked the list of the latest Hindi series on Netflix in 2022.