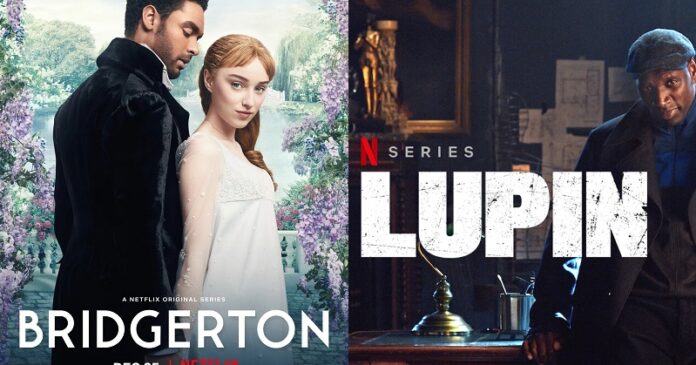 Netflix is still the finest TV streaming provider in the whole world, thanks to shows like Stranger Things, The Witcher, and The Crown, which are all Netflix originals. Netflix’s massive library of fantastic TV shows ensures that there’s always something new to watch. There are a few duds, but Netflix doesn’t really have any downtime when it comes to decent television. Choosing something to watch from Netflix’s never-ending list might be difficult. If you make the right choice, you’ll be immersed in the worlds of Peaky blinders. If you make the wrong choice, you’ll find yourself on a ranch with Hit and Run or seeing the whitest sections of a teen boy trying to solve some crimes.

Are you looking for the finest Netflix shows to watch right now? Here we are with the 10 best Netflix web series to watch this year:

We wouldn’t ordinarily include an anime series on our list of the top Netflix shows, but this one has proven to be a hit on the service, and for good reason. This slick action series follows Tanjiro Kamado, a young guy’s life is irrevocably transformed after his family is murdered — and his sister, who is still alive, transforms into a monster. Tanjiro then trains to become a demon slayer in order to discover a cure for his sister. Demon Slayer is well worth a look to see what all the hype is about, with a winning protagonist countering the show’s grim overtones. It also helps that the show looks and sounds the part, with fantastic production values and music.

The latest comic book adaptation from Netflix has nothing to do with superheroes. This post-apocalyptic fantasy series follows a half-human, half-deer youngster as he searches for a new life among the ruins of America with the help of a hardened protector. Sweet Tooth is a must-see for anyone looking for something that’s almost like cozy family viewing but with a twist. If you like it, you should check out Jeff Lemire’s fantastic comics, which the show is based on. It is one of the best Netflix web series. Season 2 of Sweet Tooth has been confirmed.

One of the finest Netflix web series in recent years, Netflix has had a lot of success with its fantasy television offerings. Shadow and Bone had a lot to live up to in a genre that also includes The Witcher, but it more than holds its own thanks to an exciting and winding plot, likable characters, and plenty of drama. Shadow and Bone take a few episodes to get into, and there could have been a little more action. Shadow and Bone is a world you can easily get lost in – and one you’ll want to do so if you’re immersed in its tale and characters. It has also been confirmed that Season 2 of this best Netflix original series will be produced.

Georgia Miller, whose years of nomadism have come to an end only to find more instability, is an example of how young parents may lead to dramatic lifestyles. Ginny, her 15-year-old daughter, is also caught up in her mother’s history. The second season of this popular series — which is frequently named among Netflix’s top shows — is unavoidable, as it ended on a cliffhanger that begs for more stories.

If properly planned, even a simple soap opera can be luxurious. Bridgerton is the first product of Netflix’s contract with Grey’s Anatomy showrunner Shonda Rhimes. Based on Julia Quinn’s romance novels, this daring and sexually charged Netflix historical drama has rapidly become the talk of the town. It follows a group of young socialites as they navigate a season of balls, betrothals, and betrayals in 1813 London, all while attempting to outwit the enigmatic Lady Whistledown, whose “gossip sheets” may make or shatter a debutante’s image in an instant.

With snappy screenwriting, vibrant costumes and backdrops, and amusing covers of Taylor Swift or Ariana Grande on period-appropriate instruments, it’s generally a blast. Its diverse ensemble is also a welcome respite, demonstrating Bridgerton’s willingness to update and break up a too-conservative genre. It isn’t all sunshine and roses, especially in one particularly thorny episode that deals with sexual assault. Given the talent on board and the positive response, we hope the show’s creators can take a little more care with the show’s relationships in Bridgerton season 2.

6. The Haunting of Hill House/Bly Manor

If you’re seeking the best Netflix horror TV show, look no further than The Haunting of Hill House, which will be followed by The Haunting of Bly Manor in 2020. Hill House is a narrative of a family who returns to their former house to confront the circumstances that pushed them away, a drama with many truly horrific scenes brought to life by a fantastic ensemble cast (including Carla Gugino and Henry Thomas).

Meanwhile, Bly Manor doesn’t quite reach the same terrifying heights as Hill Mansion – it’s about an American au pair who looks after some widowed children in another massive old house with plenty of weird goings-on – but it’s a gothic romance at its core, and admirably distinct from Hill House. Both are worth a shot for binge-watching. Both of the series tops the chart of best Netflix series list.

This British comedy/teen drama, starring Gillian Anderson and Asa Butterfield, as well as a host of previously unknown actors, is a delight. The film follows the kids, parents, and teachers at Moordale Secondary School, where Butterfield portrays Otis, the son of sex therapist Dr. Jean Milburn (Anderson). He hooks up with Maeve (Emma Mackey) to start their own in-school sex education clinic, where they can help other students with their problems. It’s a compassionate and sympathetic show that deftly tackles current themes of sexual identity and gender, and it’s also a lot of fun. It’s a hit in between the teenage and surely tops the charts of most watch Netflix web series list. Season 3 of this best Netflix original series has wrapped filming and will premiere on September 17, 2021.

The top web series on Netflix title ‘Lupin’ conjures up images of a slew of anime films, and the protagonist of this French series is inspired by thief Arsène Lupin. Assane Diop is played by Omar Sy, the son of a Senegalese immigrant who was wrongfully imprisoned for stealing at his influential employer’s request. Assane plots revenge on his employer’s family decades after his father commits suicide, utilizing ‘gentleman thief’ techniques inspired by the Lupin character. This watchable series is directed by Louis Leterrier, who directed The Incredible Hulk. With only five episodes available right now, you won’t have to wait long to finish it.

The title ‘Lupin’ conjures up images of a slew of anime films, and the protagonist of this French series is inspired by thief Arsène Lupin. Assane Diop is played by Omar Sy, the son of a Senegalese immigrant who was wrongfully imprisoned for stealing at his influential employer’s request. Assane plots revenge on his employer’s family decades after his father commits suicide, utilizing ‘gentleman thief’ techniques inspired by the Lupin character. This best web series is directed by Louis Leterrier, who directed The Incredible Hulk. With only five episodes available right now, you won’t have to wait long to finish it.

True crime is something Netflix is really fond of. This miniseries, featuring Toni Collette, Merritt Wever, and Kaitlyn Dever in top form, isn’t your standard sensationalist true-crime drama. This poignant drama about a sequence of rape cases in the states of Washington and Colorado is based on ProPublica/The Marshall Project’s 2015 Pulitzer-winning piece, ‘An Unbelievable Story of Rape.’ Instead, this is a story about sexual assault survivors, told with compassion and without melodrama. It doesn’t shy away from the suffering that these survivors have experienced, yet it never feels gratuitous, even if it is difficult to watch at times. Unbelievable is one of the best web series.

As this whimsical adaptation of the Gerard Way and Gabriel Bá-created series of comics demonstrates, Netflix doesn’t need to cooperate with Marvel to develop a fantastic superhero program. After their adopted father is assassinated in Umbrella Academy, superpowered siblings – the Hargreeves – reunite and face a looming apocalypse together.
This breezy and enjoyable show almost makes up for the absence of fresh Marvel content coming to Netflix with a superb ensemble cast that includes actors like Elliot Page and Robert Sheehan. Season 2 of The Umbrella Academy is officially available, and it’s even better than the first. Surely the series is one of the top web series on Netflix.