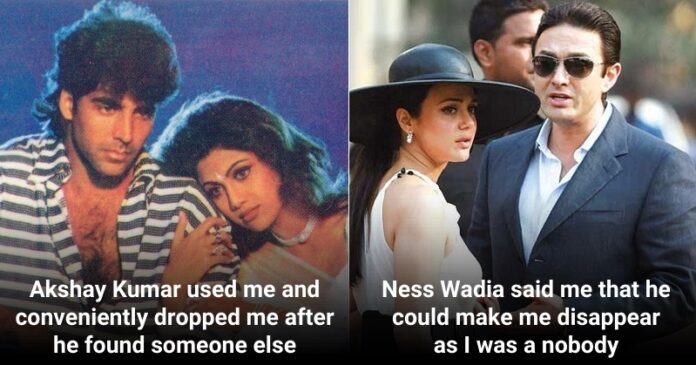 We all need someone to spend our life with and celebrities are no stranger to this feeling as well. We often want our favorite celebrity couples to end up together. But then life happens and their relationship does not last due to some of the other reasons. However, few made it ugly and gave the most controversial statements about their exes.

Here is the list of a few Bollywood actors who lashed out at their exes and created controversy. Take a look at those statements:

The famous Shilpa Shetty caught Akshay Kumar cheating on her with Twinkle Khanna. To this, she said, “Akshay Kumar used me and conveniently dropped me after he found someone else. The only person, I was upset with, was him. But I’m sure he’ll get it all back.” She continued, “It’s not easy to forget the past so soon, but I’m glad I’ve had the strength to move on. Today, he’s a forgotten chapter as far as I’m concerned. I will never work with him again.”

But things got worse they were shooting for the movie “Dhadkan”. She continued the shooting because many people put money into that movie. She said, “When you love someone and all along, don’t realize that you are being taken for a ride, it can be very annoying. I wanted our film to get over and be released so that it wouldn’t come in the way of my producers.” She further added, “I couldn’t harass them just because my personal life was turning into shambles. So, I decided to wait till Dhadkan was done with.”

After breaking up with Jacqueline Fernandez, Sajid Khan said that she used to nag him. He said, “While we broke up in May 2013, in reality right from December 2012, it started becoming sour. So you are already preparing your mind in those five months. Also, when you don’t have a woman in your life, you don’t have someone constantly nagging you, so you end up working better and are more focused.” He continued, “I went on a holiday with her for five days in the middle of making Himmatwala and felt so bad when the film didn’t do well. For Humshakals, I have not taken a single holiday.”

Preity Zinta after breakup revealed that he used to threaten her and that is why she filed an FIR against him. She said, “Mr. Ness Wadia had intimidated me by saying that he could make me disappear as I was a nobody and only an actress and he’s a powerful person.” She further added, “I have tried to be very normal and nice to him as I wanted peace in my life, but the recent afore-stated incident in Mumbai at the Wankhede stadium has left me shattered and fear for my life.”

We all know about the relationship and breakup of Shahid Kapoor and Kareena Kapoor. But after a breakup, in an interview, Shahid made a very disrespectful comment about Kareena Kapoor. He said, “I would like to work with her again. I feel that as an actor if my producer wants me to romance with a cow or a buffalo also, I’ll do it because that’s my job.”

After the divorce from Amrita Singh, Saif Ali Khan revealed the real reason for this mishappening and said, “It isn’t nice to be constantly reminded of how worthless you are and to have taunts, jeers, insults, and abuses thrown at your mother and sister all the time. I’ve gone through all of it.”

We all are well aware of the controversial debate between Kangana Ranaut and Hrithik Roshan. While Kangana started the debate, Hrithik said, “Yes, many lame rumors are doing rounds, even a dumb ass can tell where these rumors are coming from. I don’t know why exes do silly things to get your attention. For me, that chapter is over and I don’t dig graves.”

Adhyayan Suman claimed that Kangana did black magic on him. He said, “Being a metropolitan kid studying in London and New York, I was always away from things like astrology and black magic. I remember going to my Tarot reader after she started making me do pujas. She told me she sensed a woman from the ‘pahadi’ region doing black magic on me.” He continued, “I knew only one person back then, my girlfriend Kangana, who used to go to Himachal for certain pujas there. My Tarot reader said she saw something really bad happening and warned me to get out of the relationship.”

8. Deepika PadukoneWe often want our favorite celebrity couples to end up together. But then life happens and their relationship does not last due to some of the other reasons.

We all know Ranbir Kapoor cheated on Deepika Padukone with Katrina Kaif. After the break, Deepika said on Koffee with Karan that Ranbir Kapoor should endorse condom brands because when a mistake happens again and again then it becomes a problem.