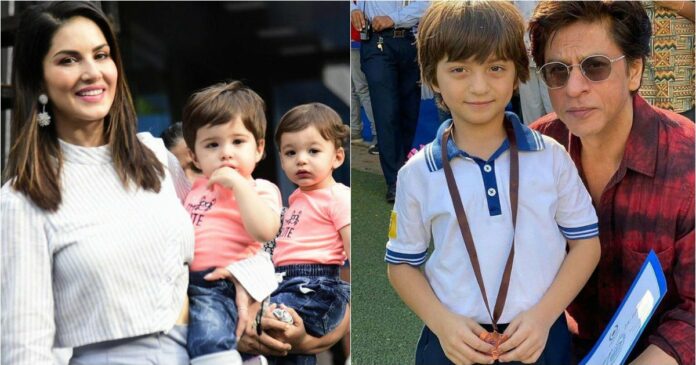 Apart from Priyanka Chopra and Nick Jonas, many celebrities have chosen surrogacy to have children. There are various reasons behind this, including being a single parent, same-sex couple, or struggling with infertility. Many celebrities have already used this method of parenthood; meanwhile, Priyanka and Nick contribute to the long-chain, as there is no way to embrace parenthood.

On January 22, 2022, they welcomed their baby girl three weeks earlier via surrogacy. Priyanka did not have any problem with fertility. Despite their busy schedules at the age of 39, Priyanka chose surrogacy as an easy option.

Here are other 15 celebrity couples who opted for surrogacy:

In a media interaction, Shah Rukh Khan explained the meaning of his son’s name, “AbRam is a Jewish connotation of Hazrat Ibrahim, so I think it is a good mix,” he also added,” It sounds very nice with the name of Hindu God, Ram, in it.”

In an interview, Tushar Kapoor revealed that after turning 35 years old, he decided to become a single father. He welcomes his son, Laksshya, on June 1, 2016, via surrogacy.

Tusshar Kapoor said as a single parent, “Never, because I wouldn’t have gone through the process of becoming a single parent if I had any doubts about it. I did it at a time and age when I was ready for it and willing to take on the responsibility,” and he also added, “I feel like I’m taking the right step. And as of today, I feel like my day is fulfilled because I have so many things to do with my son.”

Ekta Kapoor, as a single parent, opted for surrogacy. In an interview, she revealed that she had stored her eggs when she was 36. In 2019, she welcomed her son, Ravie, via surrogacy. She named her son, Ravie after her father, Ravi Kapoor. Unfortunately, Ekta Kapoor failed multiple times to get pregnant, even after multiple cycles of IUI and IVF.

Sunny Leone and Daniel Weber got married on January 20, 2011. In 2018, they welcomed their twin boys, Asher, and Nosh Weber, via surrogacy. Sunny was struggling to have a baby due to infertility. In 2017, the couple had adopted a 21 months old girl Nisha, and later in 2018, they opted for surrogacy. After adoption, the couple found out that they had twin boys. Sunny said,” We call that God’s plan”.

Preity Zinta and Gene Goodenough got married in 2016. In November 2021, they welcomed their twin son, Gia, and Jai, via surrogacy. Preity Zinta had been diagnosed with multiple myeloma, for which the chances of her conceiving a baby were less. It is the reason the couple opted for surrogacy.

Karan Johar, a single parent, welcomed his twins, Yash and Roohi Johar, via surrogacy. After altering her mother’s name, Hiroo Johar, he named her daughter and his son after his former father, Yash Johar.

Aamir Khan and his Ex-wife Kiran Rao got married in 2005. On December 5, 2011, they welcomed their baby boy, Azad Rao, via surrogacy. As Rao faced a problem conceiving a baby due to miscarriage and medical complications, they decided to opt for surrogacy.
Aamir said,” I am so humbled by the completeness Azad makes me feel.” Further, Aamir has a son, Junaid and a daughter, Ira, from his former wife, Reena Dutta.

Shilpa Shetty and Raj Kundra got married in 2009. On February 15, 2020, they welcomed a baby girl, Samisha, via surrogacy. In an interview, Shilpa Shetty revealed that she was facing miscarriages and waiting for adoption, despite surrogacy being their only option. The couple already had a seven-year-old son, Viaan.

Shilpa said,” Our prayers have been answered with a miracle”. She also explained the meaning of Samisha’s unique name as ‘Sa’ in Sanskrit means “to have” and ‘Misha’ in Russian stands for “someone like God”. She further said,” You personify thus name our God Laxmi and complete our family”.

Shreyas Talpade and Deepti Talpade got married in 2004. Over 14 years of marriage, they faced problems in having a baby, so they opted for surrogacy and were blessed with a baby girl, Aadya, in 2018. Shreyas said,” I think she looks more like Deepti with her round face” and also added,” but her features are changing every day.”

Lisa Ray and Jason Dehni got married in 2012. Before marriage, Lisa was diagnosed with a rare type of blood cancer in 2009. They had a tough time having a baby due to the actor’s cancer medication. So they opted for surrogacy in the actor’s 40s. In 2018, they welcomed twin girls, Sufi and Soleil, via surrogacy.

Baby via surrogacy: Chicago and Psalm
Date of Birth: January 2019 and May 2019
Gender: Daughter and son

Kim Kardashian and her ex-husband Kanye West got married in 2014. Kim has the condition of placenta accreta. Due to this condition, Kim suffered during her pregnancies with her son, Saint, and daughter, North.

Kim always had a big family. It left surrogacy as the safest option for her to have more children. So, the couple opted for surrogacy and welcomed their third and fourth child, daughter Chicago and son Psalm, in their family. Kim mentioned on her website,” We are incredibly grateful to our surrogate who made our dreams come true with the greatest gift one could give”, and she also added, “to our wonderful doctors and nurses for their special care.”

Kristen Welker and John Hughes got married in 2017. Kristen failed to conceive a baby, and after three years of failed IVF treatment, they decided to opt for surrogacy. On June 12, 2019, they welcomed their baby girl, Margot Lane Welker Hughes, via surrogacy. Kristen said,” I was the first person to catch her and to hold her, I felt the most incredible bond with her, and that maternal instinct kicked in immediately,”

Neil Patrick Harris and David Burtka got married in 2014. Being a same-sex couple, surrogacy was the only option to embrace parenthood. They opted for surrogacy via the help of an egg donor and a surrogate.

Harris said,” We found an egg donor anonymously through a hilarious process of looking at people’s profiles and then an amazing surrogate who had helped a same-sex couple before. And then we inserted two eggs, one with my sperm, one with David’s sperm, and they both took.” Moreover, Burtka added,” We don’t know whose is whose.”

Anderson Cooper welcomed his son, Wyatt, via surrogacy. He named him after his journalist father. Wyatt weighed 3.3 Kg during birth and the proud father, Cooper, also said,” and he is sweet, healthy, and soft, and I am beyond happy”.

Cooper, on his Instagram, posted his one picture with an emotional caption which said,” As a gay kid, I never thought it would be possible to have a child”, and he also mentioned that “I’m grateful for all those who have paved the way, and for the doctors and nurses and everyone involved in my son’s birth”. He continued,” Most of all, I am grateful to a remarkable surrogate who carried Wyatt, and watched over him lovingly, and tenderly, and gave birth to him. It is an extraordinary blessing that she and all surrogates give to families who can’t have children.” He also added that his surrogate has a beautiful family of her own and a very supportive husband and kids.

Conclusion: Surrogacy is a sensitive topic to which many people are not open yet. People still believe in the traditional method of having a baby and still have narrow thinking about surrogacy. Hope that surrogacy opens up acceptance of infertility and parenthood worldwide. These celebrities are spreading awareness of opting for surrogacy without any narrow thoughts. Also, surrogacy is not possible without remarkable surrogates and their wonderfully supportive family, who make it possible for the incapable parents to have a child.