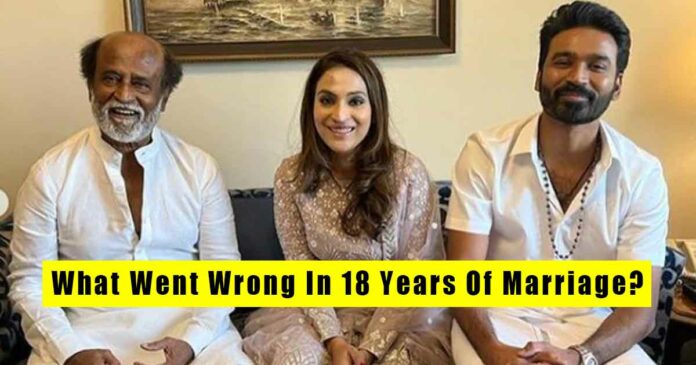 Actor Dhanush’s separation from his wife of 18 long years, Aishwaryaa Rajnikanth has shaken the Internet. Earlier this week the couple revealed in a joint statement that they have filed a Divorce after staying married for over a decade.

Filmmaker “Kasthuri Raja”, father of the actor reportedly denied the talks of separation of the Star Couple and told a Tamil newspaper it is just a “Family quarrel”. He also said that he has been talking to them and giving them the needed advice to resolve the situation.

The couple has requested their fans to give them privacy and to Respect their Decision. The duo shared a note where they wrote about their journey together and also stated that they have decided to part ways. They announced it by sharing the note on their social media accounts on Monday. The post went viral and created quite a buzz among their fans.

They stated that “18 years of togetherness as friends, couple, as parents and well-wishers to each other. The journey has been of growth, understanding, adjusting, and adapting. Today we stand at a place where our paths separate… Aishwaryaa and I have decided to part ways as a couple and take time to understand us as individuals for the better”. He also added a few words for his fans by requesting them to respect their decision and maintain their privacy.

Dhanush’s wife Aishwaryaa is the Daughter of the veteran actor Rajnikanth. She is also a filmmaker. The couple tied the knot in 2004, and now they have two sons, Yathra and Linga who were born in 2006 and 2010 respectively.

They were married for 18 long years. Aishwaryaa and Dhanush fell in love when they met during his film Kadhal Kondaen’s screening. The two started dating soon after, but back then Dhanush denied the rumors of dating and said that Aishwaryaa is only his sister’s friend. After six months of dating and involving their families, the duo tied the knot on 18th November 2004. At the time of their marriage, the actor was 21 and Aishwaryaa was 23.

Aishwaryaa once said in an interview that the best thing about their relationship was the fact that they gave each other plenty of space. They don’t believe in changing for the other person just because they want to be together.

Dhanush is a well-known actor, director, producer, and lyricist in the Kollywood Industry. He has won many awards including National Film Awards, Filmfare Awards. He was also listed in the Forbes India Celebrity 100 list six times. In 2011, “Why this Kolaveri Di”, Dhanush’s song from the romantic psychological thriller film 3 went viral and became the first Indian music video to cross 100 million views on Youtube. He made his debut in Bollywood with the film Raanjhanaa, opposite Sonam Kapoor, directed by Aanand L.Rai.

Dhanush was seen in the Hindi romantic drama, Atrangi Re, directed by Aanand L Rai. He will also be seen in the Hollywood film ‘The Gray Man’ with Chris Evan and Ryan Gosling as his co-stars. Dhanush is also a film producer and has been in the Tamil film industry for a long time. Aishwaryaa has also directed the Tamil romantic thriller ‘3’ and black comedy ‘Vai Raja Vai’ and she is also a part of the industry.

During the shooting of film 3, there were rumors that Dhanush was having an affair with his co-star Shruti Hasaan. Her husband’s alleged extra-marital affair was never brought into the public eyes by Aishwaryaa.

Aishwaryaa made a heartfelt post in October dedicated to her father Rajinikanth and husband Dhanush for their wins at the 67th National Film Awards, where Rajinikanth received Dadasaheb Phalke Award and Dhanush was the Best Actor Award winner.

Sharing this photo, Aishwaryaa wrote: “They are mine… and this is history #prouddaughter #proudwife.” Fans reminisce old times when they were together and happy by sharing tweets. After the announcement of their separation fan tweets have flooded Twitter. The most trending tweet from the fans is ‘Stay strong Rajnikanth’. Other tweets include ‘Stay strong Thalaiva, stay strong always’.

Aishwaryaa’s sister Soundarya Rajnikanth changed her Twitter Profile Picture later on Monday by uploading a throwback picture when they were kids, also featuring their father. Soundarya Rajinikanth is a graphic designer, director, film producer who mainly works in the Tamil film industry. She wrote ‘No caption needed’.

Soundarya Rajinikanth married Vishagan Vanangamudi in February of 2019. She has worked as a graphic designer in the film industry since 1999. She has also directed films such as Velaiilla Pattadhari 2 and Kochadaiiyaan. She was married to R Ashwin, before that and also has a 6-year-old son named Ved with her previous husband.