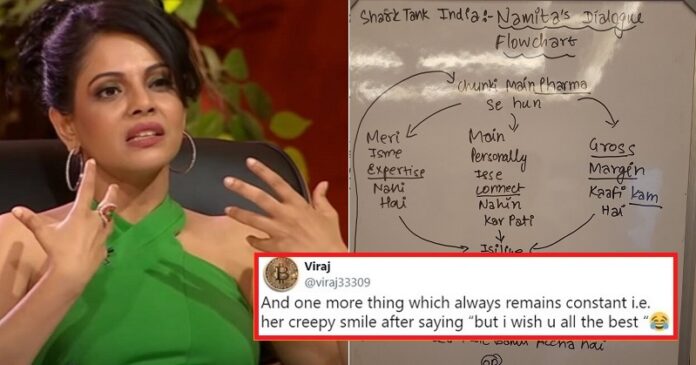 Shark Tank is a popular American show that has been around for quite some time, Shark Tank India started its journey as the Indian franchise of the American show. The show featured aspiring business entrepreneurs presenting their ideas to a panel of five investors or sharks.

The panel of judges and potential investors listen to the contestant’s pitch about the business or product they wish to develop. The judges who are self-made established entrepreneurs decide whether to invest their own money to help each contestant. The five sharks present in the episodes are- Aman Gupta, Ashneer Grover, Ghazal Alagh, Anupam Mittal, Peyush Bansal, Vineeta Singh, and Namita Thapar.

Based on the personality and unique style of dialogue delivery of each shark, a number of memes and other entertaining content have been doing the rounds on social media platforms like Twitter and Instagram. Fans have decided to join hands to troll the judges even after the show. They have previously targeted the host of the show Rannvijay Singha, and Ashneer who has a number of memes to his name for his no-filter approach. But this time, someone decided to target Namita Thapar to the extent of making a ‘dialogue flowchart’ based on her repetitive responses to the contestants of the show.

Namita Thapar was pretty consistent with her dialogues on the show, for example, choonki mein pharma se hun (because I am from pharma), meri isme expertise nahi hai (I don’t have expertise in this), etc.

One Twitter user took the time and prepared a flowchart of Namita’s dialogues and what can we say, It’s bang on!

Check out the flowchart with the caption: “Salute to Namita’s consistency in terms of her delivery”.

Netizens loved it and praised the guy for his hard work and effort. Check out some of the best reactions:

And one more thing which always remains constant i.e. her creepy smile after saying “but i wish u all the best “😂

You literally killed it bro😂😂

Hahaha… This sums up everything.

Did you like the guy’s flowchart? Let us know by leaving your comments down below.