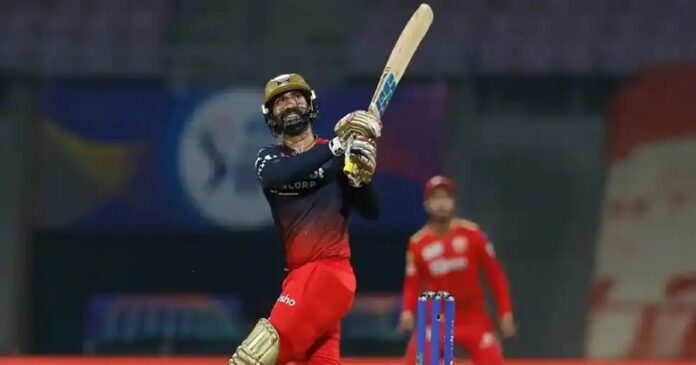 The veteran Indian cricketer, Dinesh Karthik, who previously led Kolkata Knight Riders (KKR) was released by the franchise before the mega-auction of the IPL 2022 due to the poor performance of the team. This season he is playing for the IPL team Royal Challengers Bangalore and he is in his best form in the IPL 2022. Everyone is impressed by his emergence as a finisher for his team in the tournament.

The wicketkeeper-batsman cost RCB Rs. 5.5 crore and the audience can see that he is trying his level best to justify his purchase. In the five matches that RCB played till now, Dinesh Karthik has remained not out four times with scores of 32*, 14*, 44*, 7*, and 34. RCB has won three out of the five matches they played in the tournament. DK’s performance made many cricket fans suggest that he should be included in the national team as this will certainly increase the chances of India winning the T20 World Cup and India’s search for a finisher will be over.

Dinesh Karthik’s performance was praised by many former cricketers such as Sunil Gavaskar, Ravi Shastri, and others besides his teammates. However, Karthik’s most cherished appreciation is from none other than the legendary former Indian cricketer Sachin Tendulkar.

A video has been uploaded on Youtube and the 100 MB app where Sachin Tendulkar is seen saying that in the form of Dinesh Karthik who is a 360-degree player whether he plays against spin or pace, RCB has a very lethal player. Sachin Tendulkar further added that DK first reads the line and length of the ball and then he plays the shot accordingly before he starts attacking, he begins from the very first ball and he doesn’t make up his mind early about hitting the ball. According to Sachin Tendulkar, at the present time, there are very few batsmen in the cricket world who can read the line and length of the ball as quickly as DK.

You can hear Sachin Tendulkar praising Dinesh Karthik in this video clip posted with the caption,

Watch what @sachin_rt had to say about Dinesh Karthik’s unreal form! #IPL2022”🔥

Watch what @sachin_rt had to say about Dinesh Karthik’s unreal form! 🔥#IPL2022 pic.twitter.com/tXOcmug5n5

This is one of the proudest moments of DK’s life and he responded with, “That feeling of being on cloud 9 when the G.O.A.T of cricket appreciates you”.

That feeling of being on cloud 9 when the G.O.A.T of cricket appreciates you ❤️☺️ https://t.co/EsoaWIafVV

Will RCB win the IPL this season?