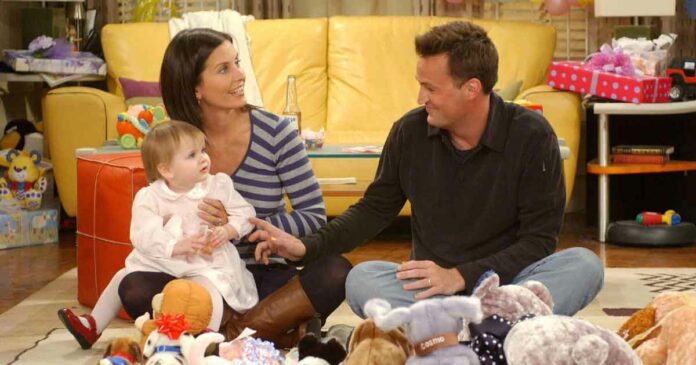 It is hard to believe that the iconic show FRIENDS wrapped 16 years ago. However, the classic sitcom has barely left our screens. And, now the reunion made things much more exciting for us. Even though the main cast i.e. Courteney Cox, Lisa Kudrow, Jennifer Aniston, David Schwimmer, Matt LeBlanc, and Matthew Perry stole the show for ten years, the featured child actors played their part too throughout the series. But, have you ever wondered where are they now? We didn’t see them at the reunion but we would have really loved to see them.

Scroll down to find out what the child actors like Emma, Ben, and more are doing today. Let’s take a look:

The first baby on FRIENDS was Ben who was Ross, and his ex-wife Carol’s son. Throughout the show, the part of Ben was played by four different actors. When Ben was born, it was played by Michael Gunderson. Later, the twin toddlers John Christopher Allen and Charles Thomas Allen took up the show. Finally, Cole Sprouse, perhaps the most notable actor played an older Ben.

Cole Sprouse first appeared on the FRIENDS show in season 1, episode 23, “The One With The Birth”. Initially, Ben’s character got some focus on the show but eventually, it faded away. Ben would pop up a few times each season which led to season seven’s “The One with the Holiday Armadillo.” However, after FRIENDS, Cole went on to have a successful acting career. He is going to star along with his twin Dylan in a Netflix show, Riverdale. And you might already know him very well from The Suite Life of Zack and Cody.

Emma was the daughter of Ross and Rachel in FRIENDS. The part of Emma was played by more than one actor, similar to her character’s half-brother. The first set of twins to play her were Alexandra and Athina Conley, and Elizabeth and Genevieve Davidson. However, twins Noelle and Cali played toddler Emma in the later seasons.

Emma was a fixture in the last two seasons of the show. She’s the first and only kid to actually become a regular character appearing in 23 episodes of the show. A number of plots even revolved around her in the last two seasons. She said her first word “gleba”, celebrated her first birthday, and also discovered her first favorite song “Baby Got Back”. Moreover, it is weird that Emma never met her half-brother Ben. However, Emma is nearly 18 now and continued to act in the thriller Us in 2019.

Phoebe’s brother Frank Junior and his wife Alice asked her to carry their baby as a surrogate. Little did they know that they are going to have triplets. The babies that played Leslie, Chandler (Baby Girl), And Frank Jr Jr were uncredited. However, the triplets appeared as toddlers by season six when Phoebe, Chandler, and Monica tried their hand at babysitting. The part of the toddlers in the show was played by quadruplets Paul, Justin, Cole, Alexis Cimoch.

The triplets appeared again in season ten with Allisyn Ashley Arm playing Leslie, Sierra Marcoux as Chandler, and Dante Pastula playing Frank Jr Jr. While Allisyn is now 24 and went on to star in the children’s TV show Sonny with a Chance, Dante Pastula is 22 and went on to star in The Polar Express. There is nothing found about Sierra Marcoux who played Chandler, the baby girl.

Do you remember the iconic moment when Chandler and Monica found out that Erica, their surrogate was having twins? It was one of the most emotional moments and it still is. The actors who were playing twins Erica and Jack Bing were not credited in the show. But, they would be around 16 years old today.

In the show, Jack and Erica only spent one night in their parent’s rent-controlled apartment. Later, they moved to upstate. Now, they must be in middle school and far away from Central Perk. We wonder that how often Jack and Erica see their cousins.

True FRIENDS fans will know that in season 10, Dakota Fanning appeared in the show as Mackenzie. She was the little girl living in the house that Chandler and Monica were going to buy. She gave some insightful advice to Joey and eventually comes round to the idea of her home sold. Her cameo was small but played a significant part in the show.

Dakota has since gone on to enjoy success in acting. She appeared in films such as War of the Worlds alongside Tom Cruise. She appeared recently in Once Upon a Time in Hollywood alongside Brad Pitt and Leonardo Di Caprio.

Emily Osment appeared as Lelani Mayolanofavich, a trick-or-treater in season seven. She may have had a small role but her character has a scene with Rachel. After appearing in FRIENDS, she went on to continue acting. She appeared alongside Miley Cyrus in Disney Channel’s hit show Hannah Montana as her BFF.

In season three, Mae Whitman appears as Sarah in “The One Where Rachel Quits”. She plays a Brown Bird whose legs get broken because of Ross. Then ultimately, Ross goes on to sell cookies for her. Mae went on to enjoy success after appearing in FRIENDS. She did shows like NBC’s Good Girls and Arrested Development. She’s also appeared in films such as The Perks of Being a Wallflower.

In season three, Kyla Pratt appeared as Brown Bird Charla Nichols. She gets into a spat with Ross for breaking Sarah’s leg, her fellow Brown Bird. Kyla went on to star in many TV shows since FRIENDS such as The Proud Family, One On One, and the Dr. Dolittle films against Eddie Murphy.