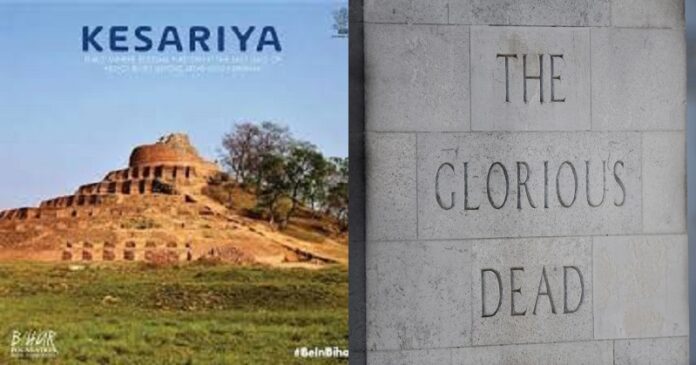 India is the land of unity in diversity. For centuries, various religions and cultures have found their home in India and have left an impact on the history of the sub-continent. Presently, India is filled with monuments and buildings built by various kings of different dynasties. Eastern India has a plethora of monuments that are significant to our history.

To know more about the monuments of India, East India is proud of, continue reading.

About 35 km northeast of Puri on the coastline of Odisha is the majestic Konark Sun Temple. The 13th-century temple has been built by King Narasimhadeval of the Eastern Ganga Dynasty. The temple is dedicated to the Hindi God- Surya and presently the temple is in ruins. The remainder has the appearance of a 100-foot high chariot with immense wheels and horses, all carved from stones.

From the 5th century CE, we have the Udayagiri Caves that are twenty rock-cut caves near Vidisha, Madhya Pradesh. Some of the oldest Hindu temples and iconography are found here. From the Gupta Period, they are the only sites that can be verified from their inscriptions. The hills and the caves are some of India’s most important monuments and are protected by the Archaeological Survey of India. Definitely, the caves are among the top 10 monuments of India to watch.

The next among the historical monuments of India is Cooch Behar Palace. Also called the Victor Jubilee Palace, the Cooch Behar Palace is a landmark in West Bengal. It was built during the reign of Maharaja Nripendra Narayan of the Koch dynasty and is modeled after the Buckingham Palace in London in 1887. Known for its elegance and style, it is brick-built and doubled story in classic Western style.

Located approximately 40 km from Bhagalpur in Bihar, India, the ancient site of Vikramsila is a small ancient town. It was once one of the most important centers for the study of Tantric Buddhism in the 8th century and was also home to Nalanda University. It is one of the most famous monuments of India.

The next among monuments of India history is the Hazarduari Palace also known as the Bara Kothi. It is located in Kila Nizamat in Murshidabad, in the Indian state of West Bengal, near the bank of the river Ganga. Built by the architect Duncan Macleod, in the 19th century, it was built during the reign of Nawab Nazim Humayun Jah of Bengal, Bihar, and Orissa.

The tomb is in the Sasaram town of Bihar state, India, and is built in the memory of Emperor Sher Shah Suri who was a Pathan from Bihar. He had founded the Suri Empire in northern India. Among monuments of India, this tomb is very important for rediscovering history.

Attributed to Emperor Ashoka of the Mauryan Empire who reigned from 268 BCE to 232 BCE, The Edicts of Ashoka are a collection of more than 30 inscriptions on the pillars, boulders, and cave walls. To describe the Edicts, Ashoka called them Dhamma Lipi. These are among the top 10 monuments of India that are known worldwide.

One of the most famous monuments of India in the East is the Glorious Dead Monument. Dead Cenotaph is built in the memory of those Calcutta British and Anglo Indians who gave their lives for King and Country between 1914 and 1918. Built-in 1924, the eastern side of the monument bears the inscription ’Glorious Dead’. And it is located in the North end of Calcutta Maidan.

Facing the Hooghly River in the West, the Metcalfe Hall is situated in Kolkata at the junction of Strand Road and Hare Street. It is visually similar to ancient Greek Temples and is reflective of the British imperial architecture of the 19th century.

Listed in the UNESCO World Heritage Sites as Mahabodhi Temple Complex at Bodh Gaya, this renowned temple is a Buddhist Vihara where Gautama Buddha is believed to have attained enlightenment.

The next among the monuments of India history is Sarnath where Buddha delivered his first sermon after attaining enlightenment. Commissioned by King Ashoka, the biggest structure here is Dhamek Stupa erected in 500 AD.

Also known as Ellenborough’s Folly or the Pepperpot, the Gwalior Monument is an octagonal cenotaph about 18 meters high. It is crowned with a bronze dome made from the guns that were captured from the Marathas.

This Stupa is located 110 kilometers from Patna in Bihar. The construction of the Stupa is traced back to the 3rd century BCE. It has a circumference of 400 feet and raises to a height of about 104 feet.