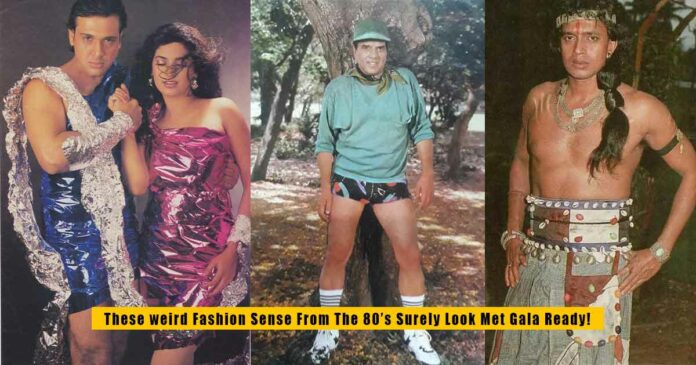 The Met Gala is regarded to be the most exclusive and renowned event in the world. It is one of the biggest fundraising nights in New York City. It is held in New York’s Metropolitan Museum of Art as a fundraiser for the Costume Institute. When editor-in-chief Diana Vreeland became a consultant for the Costume Institute in 1973, the Met Gala was met with significant changes and introduced annual themes for the balls. Today, the Met Gala is considered “the jewel in New York City’s social crown.”

The Met Gala is the most absurd homage to fashion and style. When it comes to this event, extravagance is an understatement. One thing has become glaringly evident after looking at the outfits at Met Gala every year that Bollywood of the 80s could easily be the inspiration for the Met Gala.

With lots of ‘maar-dhaar’, drama, and over-the-top acting, Hindi cinema in the 1980s was mostly masala entertainers. In the 80s, with their ‘adaas’ and style, the stunning heroines added beauty and grace to the mix and stole the hearts of millions of people. From the girl-next-door Neelam to the chulbuli Sridevi, here is the list of Bollywood heroines from the 80s that rule the hearts of millions and prove that Bollywood was always Met Gala ready.

1) With Headgear Like A Chandelier, Rekha Would Have Rocked Multiple Costumes In The Event

3) We Have Heard Something Blue In Foreign Weddings, But All Blue Is Something That Only Rekha Can Pull Off

4) There Is Nothing Like Too Much Green When It Comes To Rekha. And, With Golden Accessories, She Would Have Killed It At The Met Gala

5) Mithun Da Was A Style Icon In The 80s. With His Red Boots And Red Jacket, He Would Have Definitely Turned Some Heads Around

6) When It Comes To Period Look, Mithun Da Looks Better Than Perfection In His Braided Hair And Accessories

9) Now, It Is Pretty Clear That 80s Bollywood Invented The Monochrome Style.

10) With Their Outrageous Hairdos And Scary Eyes, 80s Bollywood Would Have Killed It In The Met Gala

11) Finally, We Got The Perfect Bodysuit To Flaunt In The Met Gala. Undoubtedly, It Will Turn Heads Around In The Event

12) No Matter What Is The Theme Of The Met Gala, 80s Bollywood Is Always Ready For It

13) And, If You Are A Believer In Minimalism, Then Again, 80s Bollywood Has Got Your Back. Look At Shakti Kapoor Wrapped In A Scarf

14) We Had Bollywood Queens Of Bling Before The Kardashians. They All Are Met Gala Ready In Their White Costumes

15) Bollywood Always Tried To Stick To The Roots. It Can Be Seen In The Costume Of Vinod Khanna As Well.

16) From Girl-Next-Door To Warrior Look, 80s Bollywood Can Rock It All. Dimple Kapadia Looks Ravishing In Her Warrior Look With A Weapon In Her Hand

17) There Was No Trend That 80s Bollywood Did Not Ace. Even If It Is Twinning. Sridevi And Jaiprada Are Looking Twin Sisters In This Costume

18) 80s Bollywood Fam Was Forever Party-Ready, Wedding-Ready, And Even After-Party Ready. If You Do Not Believe, Look At Mithun Da And Sridevi

20) There Is No Swag Like Desi Swag. This Costume Of Dharmendra Proves That Bollywood’s Fashion Was Clearly Far Ahead Of Its Times

These are a few looks from 80s Bollywood that we found amusing and these could have been the perfect outfits for any Met Gala event. Agree?